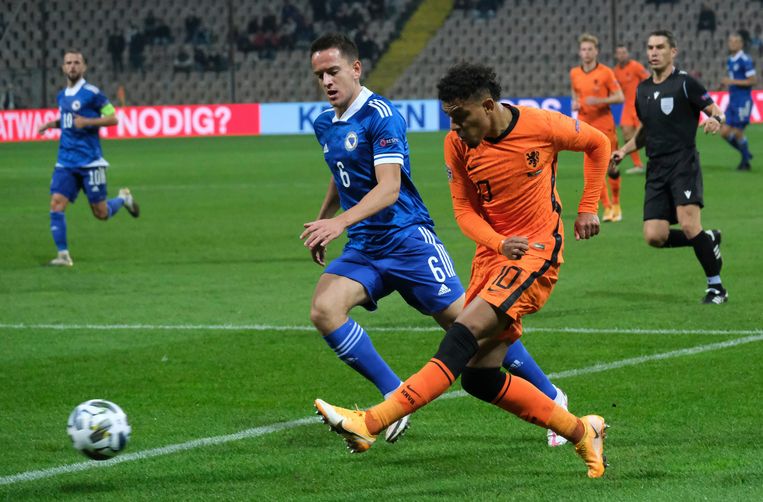 Clumsy football summary: the fiddling of Denzel Dumfries and many others in controlling the ball. The collective inability to serve striker Luuk de Jong with a few fine crosses. The viscousness, the powerlessness, the loss of the ball, the lack of pace, the lack of an individual action. Brrrr. Orange football was horribly bad, until just after the 70th minute.

Frank de Boer knitting is back. However, it is not a neat little work that arises, but a mess of constantly falling stitches. Only when the team of the new national coach flashed the knitting in the corner, football emerged that could generate some enthusiasm, with two chances from Frenkie de Jong, a brilliant header from Luuk de Jong saved by goalkeeper Sehic and a free chance for substitute Ryan Babel. . He hit the ball in a typical way: wrong. Almost every time substitute Steven Berghuis was of crucial importance in those attacks, proving De Boer’s wrong in putting him in reserve.

Not even an ounce of pleasure managed to arouse the Dutch national team for about seventy minutes. The magic is gone, was the comment to Frenkie de Jong, on the night before the match in a digital meeting with the press, which was virtually missing on the spot due to corona restrictions. De Jong replied that ‘The Netherlands is growing, while we can sometimes measure ourselves against the best countries in the world’.

It is precisely this growth that can currently be questioned, now that shrinkage is the trend. After the departure of national coach Ronald Koeman to Barcelona, ​​the decline is considerable, the decline of the team that established its name in the previous Nations League and also in the qualification series for the European Championship in 2021. Under Pope Dwight Lodeweges, the Nations League had been narrowly won. against Poland and lost against Italy, in a match that screamed for a hard hand from a national coach.

That hand must come from Frank de Boer, who was free, including mental taps from three jobs abroad with premature dismissal. He started a triptych with a friendly against Mexico (0-1), in which he kept his best players on the bench because of taxability. He was like the comedian who couldn’t tell his best jokes at the premiere.

Everyone was allowed to participate again on Sunday. It only helped little. It was a match that screamed for the end, in which Bosnia, 50th in the world ranking (Netherlands 13), even came close to a goal a few times, especially after top scorer Edin Dzeko came in after an hour.

And to think that national coach Dusan Bajevic completely changed his team after the elimination against Northern Ireland in the play-offs for the European Championship last Thursday. Dzeko and many others sat on the couch. De Boer was also amazed with his attitude. Not because of the return to the familiar midfield with Georginio Wijnaldum as the attacking pawn, as well as Frenkie de Jong and Marten de Roon as controllers, because that was already certain.

The surprise was the absence of Steven Berghuis, one of the better against the Mexicans and star in the premier league at Feyenoord. He was sitting on the bench, because Donyell Malen and the formless Quincy Promes occupied the wings from an offensive point of view, as potential decoys for Luuk de Jong, the replacement of the suspended Memphis Depay. Berghuis came in twenty minutes before time and showed more than countless others in an hour and a half.

Malen constantly moved in, where it was already busy, just like Promes often did. In the center, for example, it was packed against the defensive Bosnians lurking on the counter-attack, and Luuk de Jong hardly ever got a cross with which he could do anything. The best chance before half time was for Stefan de Vrij, with a failed header after five minutes. In modern football, the fullbacks have to step up, because they get the space. They also brought little, certainly Dumfries, although he was good defensively when he stopped the broken Kolasinac.

“We will have to do much better”, said the upset captain Virgil van Dijk after the third international match without a goal. Starting on Wednesday in Italy in Bergamo, the city so affected by corona where De Roon, who plays football with Atalanta from Bergamo, has been suspended due to a yellow card.