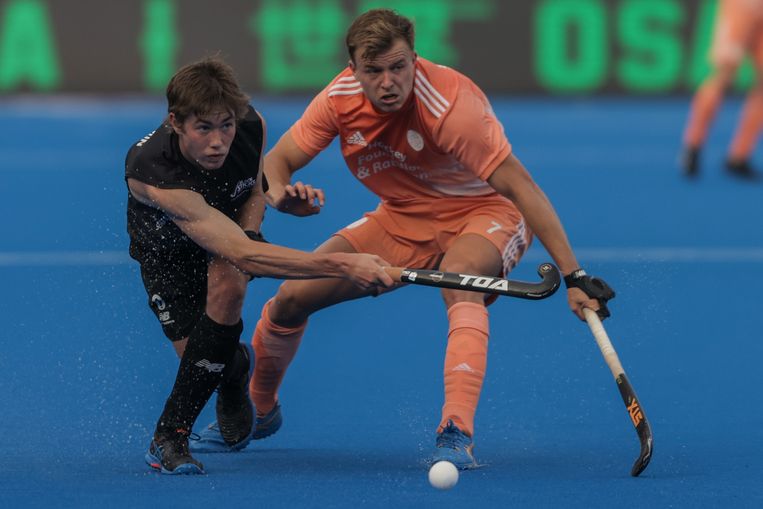 Jeroen Delmee has often pointed out since his appointment as national coach, a year and a half ago, that the laws of international hockey cannot be compared to the Dutch standard. ‘In the Netherlands we think hockey players are good if they can pass five or six men, but other things are required in global hockey.’

Delmee refers to walking ability, speed, strength, energy and gogme. But also on tough defenders who don’t shy away from duels, on tireless midfielders who sprint from circle to circle, on attackers who keep hunting and can kill a match at the right time.

International hockey has become power hockey in recent years. At the World Cup in India, top countries such as the Netherlands, Australia, Belgium, Germany and England play with a very high intensity. Whoever blinks with his eyes has missed an attack. ‘I see very attractive hockey at the World Cup,’ says Kampong coach Tim Oudenaller.

With five internationals, Kampong (leader in the major league) is the purveyor of the Dutch team. Oudenaller: ‘I find the game of the Netherlands – with a lot of speed, ball conquests and counters – spectacular to watch. That’s how we want to play with Kampong too’, said Oudenaller on the eve of the quarter-final match between the Netherlands and South Korea (Wednesday 2.30 pm).

Former international Bram Lomans also enjoys watching the game of the Netherlands in India. The 205-time international and current coach of the men of HGC sees that the pace of play is much higher than in his international time (1995-2004 and 2007-2008). ‘In fact, things are moving much faster than ten years ago. The guys are all so incredibly fit. By making optimal use of the substitution schedule, they can go full steam ahead for four, five, six minutes,’ says Lomans.

Being allowed to change without limits has changed the sport considerably, Lomans believes. ‘When I was just international, it became ed.) implemented. We didn’t use that option very smartly yet. If someone was tired, he raised his hand and was replaced. Now it is exactly clear what the intention is before the match and every player fights to the end. Hockey has become more of a ‘sprinting game’, says Lomans.

Not only the substitution has had a major effect on the high pace of play, the introduction of the self-pass in 2009 also plays an important role. At a resumption of play, a hockey player may immediately dribble in, so that the game hardly comes to a standstill. There is certainly no time to argue with the referee.

It is striking during this Hockey World Cup that the (inter)national hockey players are really big athletes, who spend many hours in the weight room. ‘The top hockey players do strength training much more constructively than we were used to’, says Lomans, who won two Olympic titles (1996, 2000) and one world title (1998) with the Netherlands.

But not only the penalty corner specialists spend many hours in the gym; Guys like Jorrit Croon, Jonas de Geus, Terrance Pieters and Thijs van Dam have also gained a lot of muscle mass in recent years. ‘They have to,’ says Oudenaller. ‘Without a physically strong body you won’t make it in today’s top hockey.’

The Kampong coach thinks it is a pity that he sees fewer ball virtuosos at work at the World Cup than, say, twenty years ago. ‘For real stylists who can decide a match with an individual action, there must always be room in a team. Especially in the violence of current power hockey – with strong defenders – there is a need for guys who can force something in a small space. It’s about a good combination: being both physically strong and creative.’

Lomans wholeheartedly agrees. ‘Types like Jorrit Croon, Seve van Ass and Thierry Brinkman are precisely players who can create an opportunity out of nothing. In the first two games of the Netherlands I still missed that ingenuity to put someone in front of the keeper with a smart free run or nice pass. That went better in the last game against Chile (14-0), but then the spaces were bigger and the defenders less good.’

Lomans sees at the World Cup that the finesse in the final pass is also missing in many other countries. ‘I think that’s a shame, because there are plenty of hockey players who can. For the time being everything is going very fast, very fast. I hope that it is precisely the stylists who will make the difference in the knockout phase.’