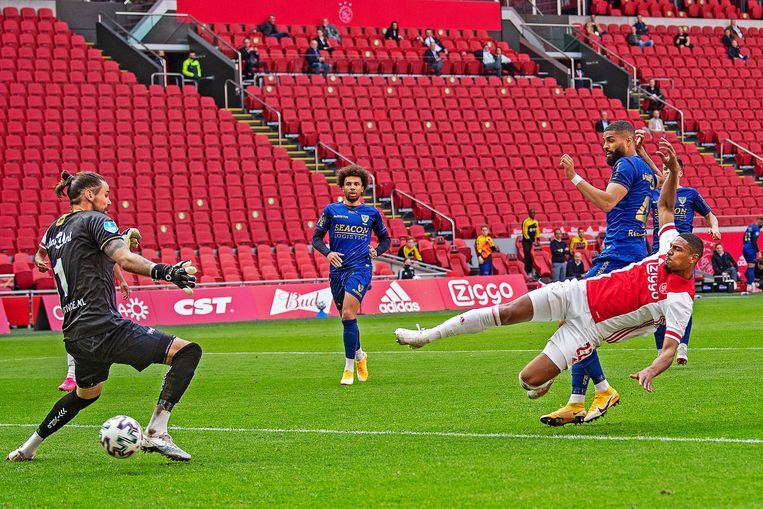 Ah, poor VVV. As big as the contrast is with Ajax, which did not win 13-0 this time, as in Venlo, but only 3-1. However, the consequences are now greater: relegation, after four seasons in the premier league. Heads bowed, resignation, mentally broken footballers whose faith had seeped down the slide from one point in fourteen duels.

So there they are, in the catacombs of the Arena. The captain, Danny Post from Amsterdam, has been a VVV member for eight years. ‘I’m not a splitting pass man. I didn’t manage to lead the team either. ‘ He points to the target numbers: 43-87. ‘Normally it was difficult to score against us, now we gave away goals so easily. That 13-0 against Ajax, that had never happened in previous seasons. ‘

Next to him Jos Luhukay, who was unable to bring about the change when he took over the coaching position after Hans de Koning’s departure. Injuries, quality, no stability, he notes. “The curtain has fallen and it hurts.” He will remain with VVV, with the promise of five promotions in Germany. “With Augsburg, Mönchengladbach, Hertha and twice as an assistant with FC Köln.”

The director also rests, leaning against the wall. Marco Bogers realizes that the budget will drop from roughly 8 to 5 million euros, the player’s budget from 3 to around 2 million. “But VVV does not collapse.” Selling top scorer Giakoumakis for an amount possibly as high as the new budget will ease the financial pain. “There is a lot of interest for him.” He scored 26 goals out of 43. That is 60 percent of the total production.

National champion Ajax surprised on Wednesday with the spectacular action by melting down the championship bowl, having it refilled with tin and manufacturing more than 42 thousand stars for season ticket holders, as compensation for the lack of matches in the stadiums.

This action is the result of creative personnel, of limitless thinking. Ajax is the national glutton who will not even miss such a scale, with 35 championships and countless other prizes in the closet. VVV has only one star, which is indivisible. Georgios Giakoumakis, goalscorer. The Greek was a sensation, especially before the winter break. In any case, he will be the top scorer of the premier league.

He was lonely in the front on Thursday, although he scored again, fifteen minutes before the end, a goal that gave VVV some hope. Barely two minutes later, Kudus scored: 3-1. It seemed as if Ajax did what it wanted, even though trainer Erik ten Hag had sent a few men on vacation and basic players were on the bench.

It was a calculated defeat for VVV, which mainly hoped that other clubs would leave something behind. VVV had failed to win the crucial match against RKC last week. But then again, rival Willem II was soon ahead in The Hague, sealed the fate of ADO and walked too far away. Emmen quickly took the lead against Heerenveen, which also received a red card.

For example, VVV’s virtual deficit in the sixteenth place of Emmen quickly amounted to four points, with the mutual game still to be played in Venlo on Sunday. And how on earth should VVV score a goal here, after Devyne Rensch’s fast 1-0? Shortly after halftime, the substitute Kenneth Taylor received the red card at Ajax, at 1-0. That didn’t help either. In fact, shortly afterwards Haller made 2-0, so that the final match VVV – Emmen is only important for Emmen. Play-offs for the people of Drenthe, or direct preservation by passing Willem II. That is the question. “See if the players can get up again,” Luhukay hopes.

VVV is just the small club that is allowed to play football in the premier league from time to time, with a pretty bizarre season this time. First match won at Emmen: 3-5, after 3-0. For a long time almost mid-engine. A great month of January. But then the trouble started. Trainer De Koning, who would leave after the season, was exchanged for Luhukay. He was also unable to score points in the season with the highest defeat of all time, and with the top scorer of the league in the team.