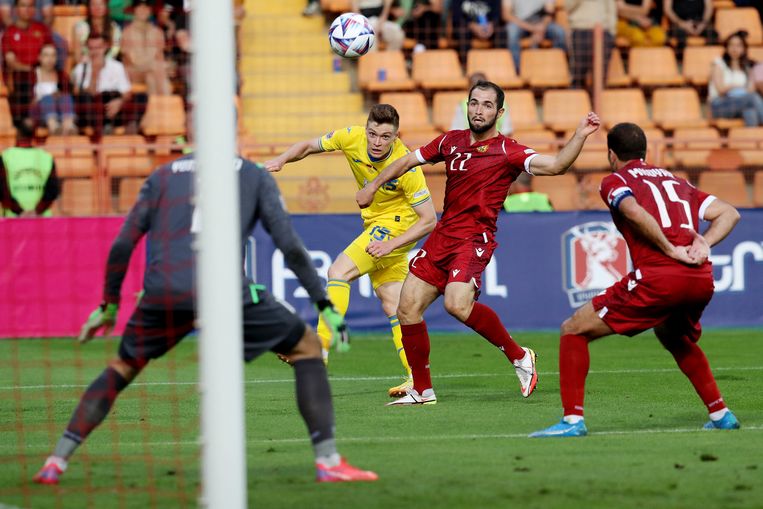 Large-scale protests or statements were not made at the special football match between Armenia and Ukraine, played in the Armenian capital Yerevan last Saturday. This is special because both countries have to deal with aggression from neighboring countries. Ukraine has been struggling with the large-scale invasion of Russia since the end of February, Armenia recently saw the battle with Azerbaijan for border areas flare up.

Ukraine’s players, as usual since Russia’s invasion, came onto the field with the national blue-and-yellow flag wrapped around their shoulders. Near the center line in the barely half-full Vazgen Sargsyan stadium (capacity: 14,400) was a banner with ‘First Armenian Front’.

Eyewitness and former Armenian international Aras Özbiliz saw and heard no further political statements around and during the Nations League match that ended in 0-5. Özbiliz: ‘There were very few people, that was actually a statement in itself. Armenians don’t think it’s appropriate to go to a football match now. The day before there were again shootings at the border, almost two hundred people have died in the past period. Weddings and birthdays are postponed.’

People do not feel unsafe in Yerevan, zbiliz outlines. ‘But you do hear statements from other countries that even our capital belongs to them. So there is definitely fear. Armenia was once a large country in the Caucasus, but we are now small and more and more are being taken away.’

In the war between Russia and Ukraine, Armenia tries to interfere as little as possible. There is disappointment that Russia, which would guard the borders in the area, did not intervene in the battle with Azerbaijan over the Nagorno-Karabakh border region two years ago. But Ukraine also failed in the eyes of many Armenians. Özbiliz: ‘We’re really stuck here, and we don’t know where it’s going.’

A success of the national team on the football field can provide a moment of happiness among the population even in times of war. Özbiliz: ‘Armenia has a sporty population, we are especially good at wrestling and chess, but also crazy about football.’

The best Armenian player by far, Henrikh Mkhitaryan, retired from international football a year ago. Özbiliz saw ‘break something’ at Armenia after the 0-2 against Ukraine, which took office without many star players.

It is difficult for many football players from countries at war to keep their focus, Yevgeny Levchenko, former Ukrainian international, knows. “I’ve spoken to several internationals, and a lot of them aren’t into football at all right now. Roman Zozulya, for example, is busy day and night collecting things and setting up actions from Spain, where he played football in recent years, to help Ukraine. He can’t sleep normally, there are more like that.’

Ukraine national coach Oleksandr Petrakov said he would take up arms if asked. He was sentenced for that ruling by the UEFA because ‘politics and sports must remain separate’, which the Ukrainian Football Association appealed and Petrakov repeated his statement. Levchenko finds it ‘super weird’ how the Uefa reacts. ‘You cannot separate sports and politics. Certainly not in this situation. It is only natural that Petrakov expresses herself like this. We must do everything we can to keep Western attention on the war in Ukraine.’

That is why Levchenko, currently busy getting ambulances from the Netherlands to Kharkiv, applauds that the Ukrainian national team continues to play. “I had hoped for a joint statement with Armenia, because we are both under attack, we are both in the same boat. It’s about your freedom. We have to see the bigger picture, in Ukraine the freedom of Europe is being contested, not everyone realizes that.’

In Armenia people are disappointed by the limited interest in their fate. Özbiliz: ‘Armenians feel a bit abandoned. We are so small that we are no match, apparently. I hope we are heard too.’

The Ukrainian football league has recently started up again, that of Armenia will continue as usual. Özbiliz (32), trained by Ajax and also playing for major Russian and Turkish clubs, currently plays for the Armenian club Punjik Yerevan. “We are playing European football for the first time in history. That is nice to experience and hopefully offers some comfort.’

The national football team of Armenia no longer played a role in the Nations League group. That of Ukraine can become a group winner and thus force promotion to the A-division, if it beats Scotland on Tuesday in Krakow, Poland. What is its value? Levchenko: ‘It’s big. The national team raises money for our soldiers, draws attention to them. Soldiers at the front say to the internationals: we fight here, you have to do it on the football field so that we are not forgotten.’