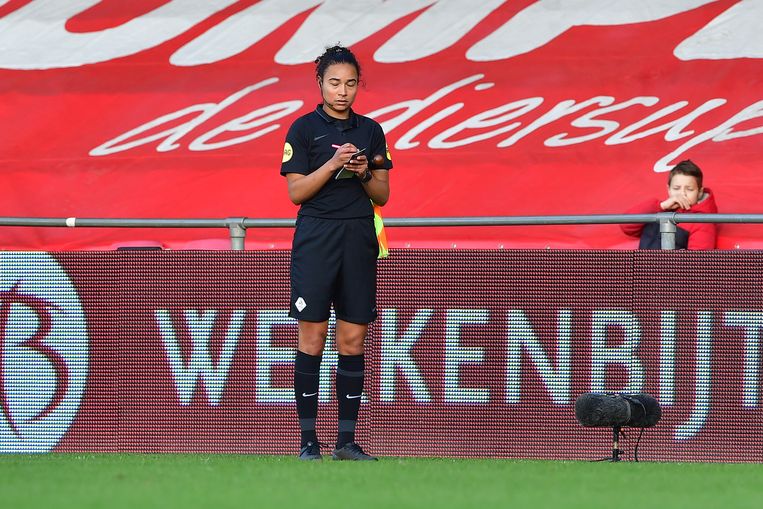 While fireworks are being set off outside De Adelaarshorst stadium, linesman Franca Overtoom walks onto the field in Deventer next to her colleagues. She laughs, has a chat with Go Ahead captain Luuk Brouwers and seems to be looking forward to it. The 29-year-old is today at the Eredivisie match between Go Ahead Eagles and FC Groningen. That is a first: never before has a woman been so active at the highest level of Dutch football.

The seats in De Adelaarshorst remain empty, but that doesn’t make the experience any less special for her: ‘I had felt for a long time that I was ready for this. When I heard that I had been selected for this match, it felt like a dream come true’, says Overtoom after the game that the Groningen team won 1-0. In 2018, the referee from Obdam already made his debut in professional football, as an assistant referee in the first division. Since then, she has been a steady force at that level. ‘It has been a long journey. Last year I had a very good second half of the season, so the next goal was to make my debut in the Eredivisie.’

Overtoom has it mostly quiet in the first half, but will have to deal with VAR at the start of the second half. For a moment it is questionable whether the goal by FC Groningen’s Jørgen Strand Larsen is valid. After consultation, the goal still stands. That’s the only goal of the game. Even after Go Ahead Eagles received two red cards and FC Groningen plays with two more men, Danny Buijs’s team is unable to increase the goal difference any further.

Meanwhile, Overtoom is visibly enjoying himself on the other side of the field. “I generally run well, so the physical test for referees wasn’t really a problem for me,” she says. In that test, the requirements for men and women are the same and that is only logical according to Overtoom: ‘If I do not properly assess an offside situation because I am not on the same page, no one will say that it does not matter because I am a woman. .’

Whether she is also approached in a different way than male colleagues? She doesn’t think so. ‘I’ve never been verbally abused myself. In principle, it shouldn’t matter whether I’m there as a woman or as a man.’