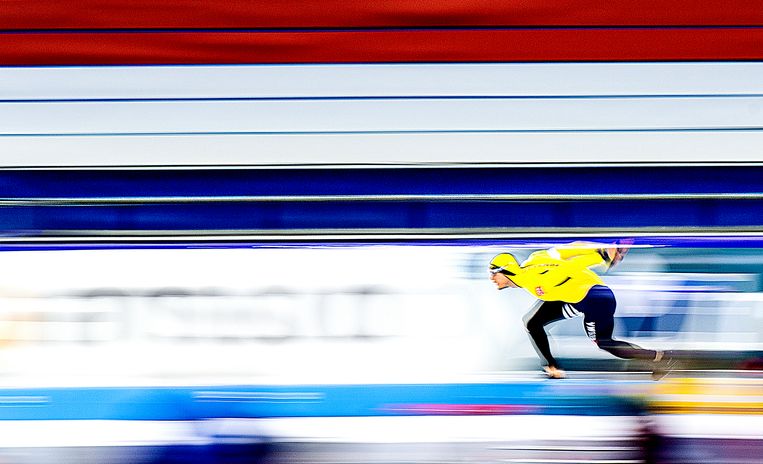 More than once Hein Otterspeer was in the car on Sunday evening back home with the plague in his body. After a failed championship or wasted race. “Nothing again,” he would sigh and play with the thought of stopping.

Despite those gloomy car rides, he continued to skate. Year after disappointing year. “Deep down I knew it,” he says on Sunday evening. He pats it on his chest. “If everything is right for me, I can beat the best in the world.” Jac Orie’s 32-year-old pupil has just become Dutch sprint champion.

He finished second kilometer behind Thomas Krol (1.08.34) and Kai Verbij (1.08.62), who finished second in the final classification. Dai Dai N’tab finished third. Striking was the strength of the Jumbo-Visma formation, which occupied the first six positions in the final classification, aided by the disqualification of Kjeld Nuis from the 500 meters on Saturday and the abandonment of Ronald Mulder on Sunday. They ride for another team.

It was the third time that Otterspeer won the national sprint title, but it was one with great significance. He won the title for the first time in 2015, a winter where everything seemed to be possible. He had just joined Orie and was not only national champion but also second at the World Cup in Kazakhstan, behind the Russian Pavel Kulizhnikov.

Then fate struck. In May 2015, he was hit by a car during a training ride on a racing bike in the Groningen village of Sebaldeburen. That accident would haunt him. Each time his back played up. It drove him crazy.

Flashes of his talent

He no longer reached his level of 2015. Very occasionally there were flashes of his talent, such as in 2019 when he became sprint champion for the second time. Then he celebrated it as a victory on his back. That was not entirely right, he now looks back. He had gone through his back a week before that NK and would struggle with it afterwards.

No, it was usually tough. Then the audience in the stands held their breath as he rushed into the corner with his almost 90 kilograms and 1 meter 93. Does he like it? He himself did not know either. His body was so unreliable that, hoping for the best, he turned into such a corner and usually came out far too wide, if he stayed upright.

Still, he kept hope, just like Orie. Between all the back pain, his coach saw how powerful his pupil actually was. ‘He can free up resources, that is absolute world class’, says Orie, who also praises Otterspeer’s unprecedented motivation. “He’s a real lover.”

The back problems are now under control. At the end of the previous season, he sought help from a foreign back specialist, who examined and treated him from head to toe. It turned out that all those years after the collision, the sprinter was still struggling with problems on the right side of his body. He himself calls it a ‘crumple zone’. He appeared to compensate a lot with his left leg and was chronically out of balance.

The problem was solved little by little with treatments. In the summer he already noticed how big the difference was with previous years. If he had done strength or cycling training, he no longer felt pain. His test results improved, as did his mood. Orie saw it in the logbooks his skaters keep and in which they rate their feelings every morning. “He’s been one point higher than normal for two months.”

‘I am now standing on two feet,’ says Otterspeer and demonstratively plants both feet on the ground. “Also on the ice.” It can release its power symmetrically, which translates into much greater stability. His torso no longer swings and swings as he dives into the corner. Even though he is now a few pounds heavier than previous years thanks to a heavier training regime. “I now enter the corner with control and stability and exit the corner with control and stability.”

Sunday evening he is back home alone in the car. Now with a crown of honor in the trunk and a big grin on his face. ‘There have been people who said: it is mental with that boy. It wasn’t, but I was riding people who could always fall back on a good body. I couldn’t. Now it is.’