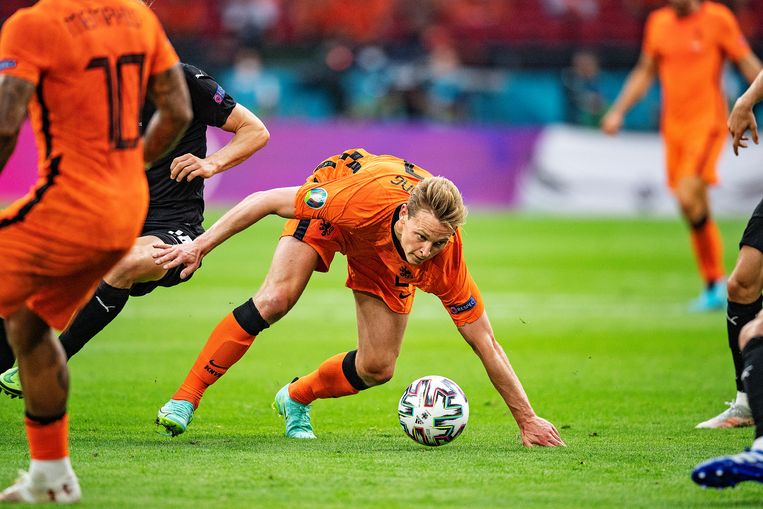 Poor football is accompanied by lavish results for the Dutch national team. This sporty form of profit maximization brings Frank de Boer’s team into the eighth finals of the European Championship after two matches.

They are certainly industrious, the men of Orange, even heartwarmingly eager to work. It only remains with football, despite the second win in Amsterdam, now against Austria 2-0, after Ukraine was previously defeated.

Denzel Dumfries is the man of the tournament so far for the Orange, a wildly enthusiastic footballer who used to be the only one in his environment who believed in a life as a professional. In that respect it is a great European Championship: dare to dream as a child with some talent and who knows, you might one day be playing football in the Arena, in front of 16 thousand supporters dressed in orange.

It’s strange: two games played, six points. Seen a lot of enthusiasm, with often poor playing. In fact, the day had come in the Arena when the average Austria usually played better football than the Netherlands, as it used to be.

But the Netherlands is already group winner, because mutual result counts in case of a tie in points. Almost ten days now follow, with the match against North Macedonia on Monday, before the eighth final is played in Budapest on Sunday, June 27, against a number three, from group D, E or F.

Perhaps it makes sense to play against the Macedonians in the old 4-3-3, the system in which the team under Ronald Koeman came to fruition. Because yes, that football of Orange, how can that be described? The Dutch national team is like a happy, sweet child who goes to school for the test week. The backpack is packed with knowledge. There has been quite a lot of studying in the past few weeks. However, it is uncertain whether the child has sufficient skills. More than a six is ​​not in it, and that is due to diligence. And a six did pass to the next round.

It is also partly because the master has taught a different method. Frank de Boer switched to 3-5-2, as he likes to call 5-3-2, to build in defensive security. That game type looks a bit poor against opponents such as Ukraine and Austria, countries that ‘in the past’ were simply handled in the Dutch way, with flair, dominance, play in the opponent’s half, creativity and tension on the wings. Then things sometimes went wrong, but that happened in the Dutch way.

Now a system has been adopted that is at the expense of creativity, because there is no room for many attractive players. Ryan Gravenberch, Donyell Malen, Steven Berghuis, you name them, they mainly keep the couch warm. The Netherlands hangs back and often leaves the ball to the opponent. It also takes a while to get to grips with the way of playing, provided the time of a tournament is long enough. The current position as group winner may be the saving grace. If the Netherlands plays against a tough opponent, the team may have mastered the system just enough. In that sense, it is better to stick with the current way of playing, to be able to sharpen one more game.

The enthusiasm makes up for it, but not enough for a satisfying evening. Denzel Dumfries is a sensation, especially now that he can cover the entire flank as a so-called wingback. He does have wings. He is everywhere, as if he has hidden a rocket under his sweater and is secretly flying pieces. But you can also expect a football form of elevation from Orange, the best football that a country has to offer. Then doing your best is on the lean side.

Stefan de Vrij is an organizer of the defense full of class. Frenkie de Jong is a wonderful playmaker and with Memphis Depay it is all or nothing, on Thursday nothing more than everything, although he then used the penalty for 1-0. Marten de Roon conquers balls, forfeits balls and occasionally kicks an opponent upside down.

There was almost no decent attack in the first half. The run-up to the 1-0 was special. At first De Vrij had escaped as a kind of right winger. He lost the ball, followed by a strange schwalbe. In the sequel, Alaba played the ball too far ahead of him, after which he stepped on the foot of Denzel Dumfries, yes him again. Referee Grinfeld from Israel gave a penalty, on the advice of the VAR.

After rest the picture was about the same. Donyell Malen, who came on for Weghorst, made the decision when Depay sent him away and Malen put the ball nicely wide. Who showed up there? Dumfries of course, top scorer of Orange during the European Championship, with two goals.

Does the overview below not work? Click here to view the standings and match results.