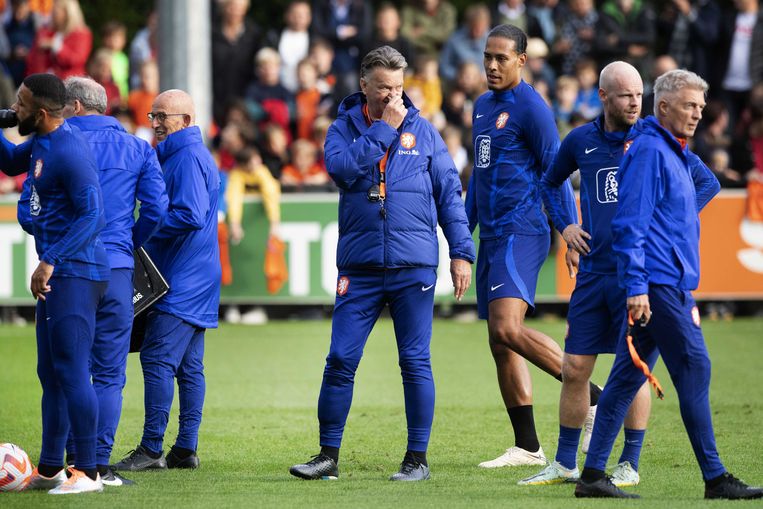 Everything comes together during a week at the Orange squad, the last period with matches before the departure to the World Cup in Qatar in mid-November. The full range of activities: talking. Fitting clothes. Do commercial things. Practice on penalties, and much more. Anyone who still wants to join the selection must deliver, even more than someone who is already in the group, because he has already been weighed by Van Gaal.

Van Gaal only wants to talk about football, although the players saw a clip about Qatar on Monday, with a role for human rights organization Amnesty International. Secretary-General Gijs de Jong of the KNVB once again updated the internationals about the situation in the country in terms of workers’ rights. “Unions have a greater political influence than a player,” says Van Gaal. ‘Players have to play football.’ He understands the international discussion about a compensation fund for relatives of victims of the construction of World Cup infrastructure all too well. “Of course I support that compensation fund, especially if you look at the billions, or millions that FIFA makes.”

“You can think of it yourself,” said Van Gaal about players who may still report. The group is pretty solid, but for example Donyell Malen is back from an injury and Luuk de Jong is almost back. Only: time is running out. The departure is mid-November, the first game against Senegal will follow on November 21. This week, the Orange squad will play the last group matches in the Nations League, against Poland (away, Thursday) and Belgium (home, Sunday).

In Zeist, former volleyball coach Peter Murphy, who both studied and taught, also reported this week to talk about psychological aspects of penalty kicks. In 2014, ‘the eye of the master’ was still decisive. Just before the end of the 120 minutes, Van Gaal brought in Tim Krul in the quarterfinals against Costa Rica for Jasper Cillessen, with a win and two stopped penalties. He was unable to repeat the trick in the semi-final against Argentina because he ran out of substitutions. Van Gaal has called this a mistake of his own, in order to immediately put it into perspective. He thought that Huntelaar, who came in for Van Persie, would still decide the game. When that didn’t happen, the order of taking was disrupted and Ron Vlaar missed the first.

‘Now we are going to provide as much scientific support as possible’. He thinks that the Netherlands is further ahead in this respect than many other countries. ‘Football is a sport in which conservatism plays an important role.’ Among other things, Murphy will talk about “how to embarrass an opponent.” At Van Gaal, that can go quite far, if it is within the rules.

Goalkeeper Justin Bijlow of Feyenoord, who to his slight surprise dropped out of the selection, reports this week to practice on penalties. Van Gaal refutes criticism of Bijlow’s lack, while he called up four goalkeepers with Jasper Cillessen, Mark Flek and the newcomers Remko Pasveer and Andries Noppert, the last two also because they were never on the selection and he wants to get to know them. ‘Jan Publiek doesn’t look the way we look.’ About Bijlow: ‘He didn’t deliver at the beginning of this season, compared to the players called up. And if you stop a ball, it doesn’t mean you’re a good goalkeeper. There are other team functions.’

Gate not fully closed yet

Sixty players have been followed. Those who have never been to the group have only a small chance. Joey Veerman was in the pre-selection, but played less lately. But for Veerman and Brian Brobbey, for example, the gate is not yet completely closed. Other qualities than just football count for selection. ‘Behaviour, personality to undergo a tournament together.’

He is quite happy with football. ‘We are working on the implementation of a new system. I’m trying to tinker with that, because it hasn’t been run properly for 90 minutes. The 1-3-4-3 must be executed in the vision of Louis van Gaal. The prospect of success is greater than when I started. The guys have accepted the system and want to implement it. And we haven’t lost yet.’