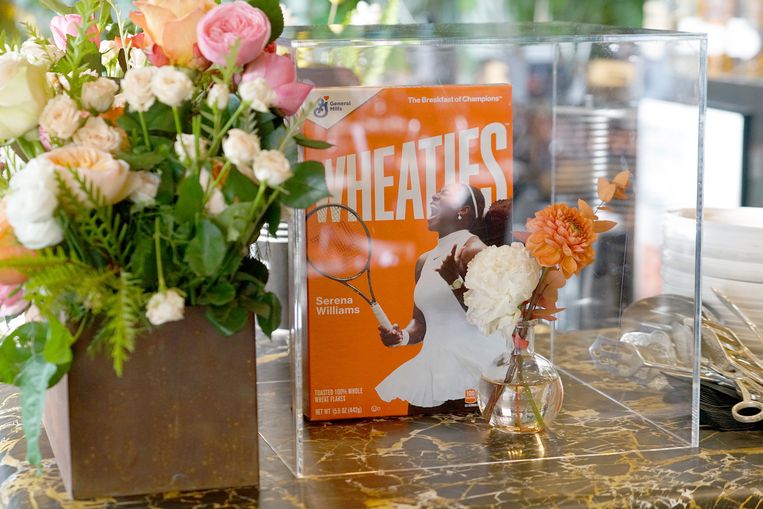 In America you are only really a champion if your head is on a Wheaties box. The cornflakes brand started it in the 1930s and launched the term ‘breakfast of champions’. Controversial athletes who were skipped sometimes come decades later, such as Tommie Smith, whose clenched fist in a black leather glove already traveled the world in 1968.

In a video of a tour of her home, Serena Williams recently took a look at her trophy cabinet. “These are objects that are worth a lot to me,” said the 23-time Grand Slam winner, pointing to her sizeable harvest. Among all the silverware, she named a special showpiece first: a packet of Wheaties cereal, bearing her image.

It has been an American tradition since the 1930s: the greatest champions see their faces appear on the packaging of the breakfast product. Whoever gets their own Wheaties box joins an exclusive company, a fact that makes pursuing the honor an end in itself for some athletes. “I find it hard to believe that I managed to achieve this,” said swimmer Michael Phelps when he was selected for the third time by the cornflakes brand in 2016, after the Rio de Janeiro Games.

Breakfast of champions is the slogan with which Minneapolis-based food manufacturer General Mills launched its product in 1933. Breakfast for champions. The term became common in American culture and is still on the packaging.

In 1934, New York Yankees chief baseman Lou Gehrig was the first athlete to appear on the Wheaties boxes, albeit on the back. Two-time Olympic champion pole vaulter Bob Richards was the first to adorn the front cover in 1958.

Over the years, greats such as Pete Sampras, Carl Lewis, Chris Evert, Tiger Woods, Jackie Joyner-Kersee and Stephen Curry have appeared, while champions from the outside category like Phelps are allowed to show up more often. Record holder is Michael Jordan with eighteen appearances. “Make sure you eat your Wheaties,” said the star basketball player in several television spots in the 1990s.

Currently, LeBron James is gracing the signature orange-hued Wheaties cartons on U.S. supermarket shelves. The basketball player, reigning champion with the Los Angeles Lakers, was chosen in part for his off-line merits. The package shows James with students from the underprivileged children’s school he founded in his hometown of Akron, Ohio.

Only champions are eligible for immortalization in cardboard, with golden Olympians having an advantage. An American passport seems to be a different criterion: only a few exceptions, such as Canadian ice hockey player Wayne Gretzky, have a different nationality. Greats like Usain Bolt or Roger Federer are missing.

Wheaties marketers usually choose the most flawless athletes, the ideal sons-in-law and daughters-in-law. (The company will no doubt regret choosing Lance Armstrong in 1999.)

The selection procedure regularly led to discussion. Worthy champions were passed over during their heyday for a variety of reasons. Boxing legend Muhammad Ali was considered a controversial figure in the 1960s for his conscientious objection and dedication to the Nation of Islam. Only received in 1999 the greatest of all time its own Wheaties edition, unveiled at a ceremony at Madison Square Garden in New York. “Man, I’m still handsome,” said the boxing champion.

At the end of last year, sprint champion Tommie Smith received his own box of cornflakes, more than fifty years after he had won the 200-meter sprint at the Games in Mexico City. On stage, the African American at the time raised his clenched fist, wrapped in a black leather glove, as a symbol of black power, after which he was banned from the Olympic village by the IOC.

The omission of four-time Olympic diving champion Greg Louganis rectified Wheaties in 2016 after a petition was started to get him on the cereal boxes. Louganis is said to have passed over in the 1980s due to rumors of his homosexuality. The HIV-infected sportsman announced his sexual orientation in 1994. More than two decades later, he was selected by Wheaties as part of a series of Olympic legends.

Classic editions of Wheaties cereal cartons are being traded online as collector’s items, while new boxes are selling less and less. In the 1960s, 7 percent of Americans started the day with Wheaties cornflakes in a bowl of milk, but now the combination, once the cornerstone of American breakfast, is no longer the most common option.

Knowledge about nutritional value and the human body has increased in recent decades, champions are now drawing from healthier kegs. The symbolic value of the brand remains, especially for athletes themselves. “As a champion, I always wanted to appear on a Wheaties box,” said Tommie Smith at his election last year.