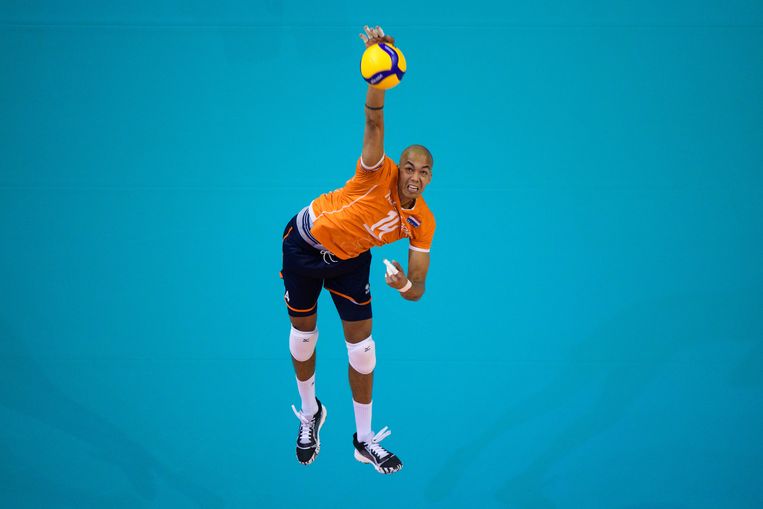 In succession, Nimir Abdelaziz, the sensational main attacker of the national team, made 65 points in Volleyball Nations League (VNL) in three days. On Friday against Russia it was 29. A day later he scored 25 against Japan. On Sunday, in the self-chosen role of substitute, he still made 11 points and was also the top scorer of the Dutch volleyball team.

The Dutch team has been admitted to the best sixteen teams in the world for the Nations League that have been assembled for a month in a bubble in Rimini, the seaside resort in volleyball-crazy Italy, as a replacement for canceling China. Nimir Abdelaziz, son of a Chadian father and a Dutch mother, was the news of the week in the Italian sports newspapers.

As the star of the Superlega, he made the switch from Champions League finalist Trentino to tradition club Leo Shoes Modena. The 29-year-old diagonal player signed a three-year contract. He was overjoyed with it, he said after the national team’s third loss that he serves as a service cannon, finisher and captain.

That switch was called a happy accident. Because of financial problems at Trentino, Abdelaziz was suddenly forced into the wasteland of the transfer market. “Luckily there were two Italian clubs that wanted me: Perugia and Modena. Two really really good teams. For me, Modena is the biggest club in volleyball history and the most beautiful to play for. Next season there will be a top team, with the Brazilian playmaker Bruno, the Frenchman Ngapeth and the Cuban Leal.

‘No, before my transfer I had no contact with Bas van de Goor and Wytze Kooistra, Dutchmen who played there in yellow-blue. I didn’t need that good advice, ‘laughs Abdelaziz, the leader of the top scorers classification of the past, corona-ravaged volleyball season in the highest league. The number 14, his regular number with the Dutch team, will be coached again after the summer at Modena by the best Italian volleyball player in history, Andrea Giani, known for the decisive Italian ball on the antenna in the Olympic final of 1996 (won by The Netherlands).

Giani previously coached Nimir at Revivre Milano. The knowledgeable coach took the 2.01 meter Dutchman away from the French Poitiers, where he had made an impression when he exchanged the role of playmaker for that of diagonal, the main attacker of a volleyball team.

Abdelaziz, born in The Hague but raised in Namibia in his early childhood, has already had four Italian employers in ten years’ time. As a youngster he already played for Sisley Treviso, the old club of Ron Zwerver, in 2011. The following year, Piemonte was his club. After years in Turkey, Poland and France, he was back in Italy in 2017, with Milan. In 2020 he switched to Trentino. In Rimini, the volleyball world saw Nimir Abdelaziz at his best in a number of phases of the first three VNL matches. His contribution in the won third set against superpower Russia was especially impressive. From the service line, he produced aces in a row, one at over 128 kilometers per hour. That violence was not enough for a victory. Russia, the winner of the last VNL, the one in 2019, won 3-1. The day after, the Netherlands led by Abdelaziz 2-0 against Japan, but the team of Italian coach Roberto Piazza lost the thread: 2-3.

“We should have won that match,” said the captain on Sunday, after he had seen his team often lose 0-3 to Iran from the substitution angle. The deployment of Abdelaziz in set three did lead to the revival of the Dutch team, but on 24-23 and 25-24 even the top scorer with the golden right arm was unable to win the set. Iran cashed in on the fourth match point (28-30). This summer’s VNL, a great opportunity for the team of the Netherlands, is being used to gain experience. There are a total of fifteen matches, each time three in three days, followed by three days of rest. “Hey, hey, then there will be training,” Abdelaziz wants to make clear that full efforts are being made to improve the national team that surprised three years ago at the World Cup with eighth place in the final standings.

In the first two games of the tournament, Abdelaziz was neatly served on the outside by Freek de Weijer, the playmaker of Eredivisie champion Draaisma Dynamo. ‘It’s a great month for those young guys from the Netherlands. They can experience what is needed at this level.’ After the summer, De Weijer will go to Greece, to AOP Kifissia, and play the Champions League there.

The other young guy who brings Abdelaziz without fail is Bennie Tuinstra, the passer-runner of Amysoft Lycurgus from Groningen, who switches to Helios Grizzlys in the German Bundesliga. “I didn’t really know Bennie. I had to introduce myself to him. But there is a good vibe going out from him. He has charisma and personality, that also applies to Freek de Weijer.’