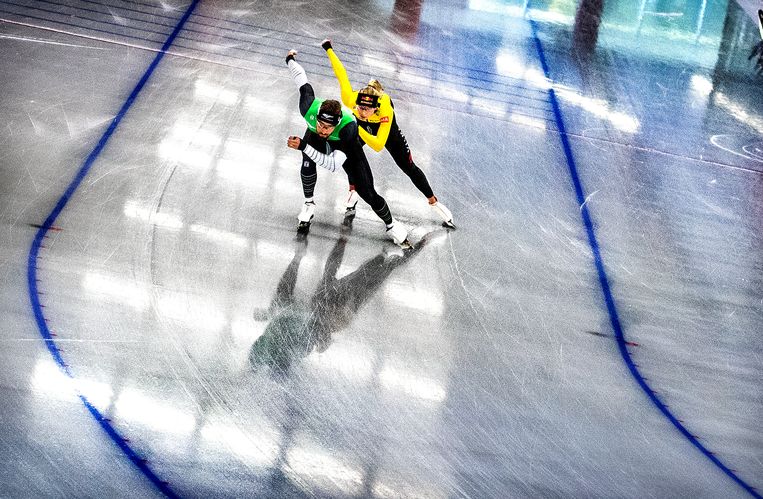 In the swimming pool of Ruhpolding, a town not far from the skating village Inzell, Kjeld Nuis clutches his chest. It is high summer and just before that, the 31-year-old skater has performed circus-like antics on the high diving board.

His back flip was captured on video and he will share on Instagram later. That cheerfulness is completely gone because of the sudden shooting pains in his heart region. At the insistence of his teammates, he calls the team doctor. Her advice is to go straight to the hospital.

“When I came in, I could lie down right away. All snakes went straight to my body. I thought: this is serious shit’, he says three months later, again in Ruhpolding. A heart film was easily made. There appeared to be nothing wrong. That was a great relief for Nuis. “Everything with your heart is fucking scary. Not just for your sport, but for your whole life.’

He could continue his sport and his life as he wished. The skating season starts next Friday in Heerenveen with the NK distances. Nuis looks confidently at that first real test of the Olympic season. It is the winter in which he wants to repeat his double victory, in the 1,000 and 1,500 meters, from four years ago in Pyeongchang.

The shock in the pool was understandable. A few weeks earlier, Nuis was also hospitalized in Heerenveen on a heart monitor. He had developed symptoms five days after his corona jab. “Sweaty, pain in my throat, chest pressure.” There was also a high fever. Examination revealed that he had an inflamed pericardium, pericarditis. A known, but equally rare, side effect of the Pfizer vaccine. ‘Out of 18 million vaccinated there are 30 people who have this.’

Once in the hospital, his symptoms subsided quickly. The inflammation was confined to the pericardium and did not spread to the heart muscle, the much more serious myocarditis. ‘Then you lie there for 3.5 months. It was like the flu for me. It made me sick for a week.’

He was able to quickly resume his training and, at that time in southern Germany, has never lost confidence in his body. In no time he was able to perform all his training sessions again. His expectations are high for the winter.

The contrast with last year is stark. Then he wanted to prove that his move from coach Jac Orie’s team, where he had ridden for eleven years, to Gerard van Velde was a smart move. But three weeks before the start of the season, he was felled by corona. He was no longer able to close the gap that he then fell on his competitors.

He still came close. At the World Championship distances, the final match in the international skating bubble in Heerenveen, he captured silver in the 1,500 meters. He conceded only 0.36 seconds with 1.44.11 on Thomas Krol, the man who dominated the distance last year. It was Nuis’ best time of the season and proof of his resilience and perseverance. “I was really proud of that.”

That experience helped him this summer, when he was hospitalized just seven months before the Winter Games. He didn’t panic. “I’ve learned that you can do a lot more than you think.”

Nuis knows what it’s like to be hit and bounce back. He did it again and again in the years after his Olympic success. It started immediately in the year after the 2018 Games. The relationship with the mother of his son broke down. Despite the emotional confusion that entailed, he tried to live up to his status as a two-time Olympic champion.

He argued with the referee at the European Sprint Championship in Collalbo that year after a disqualification. At the World Championship distances, he disappointed with fifth place in the 1,500 meters. Crying from impotence, he received bronze in the 1,000 meters. ‘Now I think: what was I doing. But I came from a period where I only won gold and thought I would do that more often. No, I wasn’t feeling well at all then.’

It has nothing to do with the Olympic titles that it was often against, he thinks. There is no such thing as a golden curse. His entire skating career has always been one of ups and downs. “I haven’t had a weird four, but a weird ten years.”

Setbacks are part of it, says Nuis, who missed the Games in 2010 because others enjoyed a protected status and was not allowed to go to Sochi in 2014 because he completely screwed up the Olympic qualifying tournament. “No one has a flawless career, but some have just a few more bears on the road.”

Sometimes he jumps – with a bit of luck – over the obstacles that end up in his path. Such is the fate again. For example, when he was hit by a car during a training camp in Collalbo in northern Italy in June of this year.

During a joint bike ride, a motorist in Bolzano overlooked Team Reggeborgh’s group, which had right of way on the bike path they were riding. Hein Otterspeer, who was leading with Nuis, was able to just avoid the car, he himself was unable to turn and slammed into the hood. “My teammates behind me saw my bike fly through the air and me flip over that car.” He didn’t mind. Just a broken saddle.

A few days later: another stroke of luck. It turned out that his steering wheel was also broken unnoticed in the collision. While he was cycling through a pit during a sprint training, suddenly half of it broke. Miraculously, with one hand on the remaining piece of handlebars, he remained upright.

The most important hurdles in his career were not the bicycle accidents, relationship problems or injuries he faced, but the barriers his own mind puts up. After missing out on the 2014 Games, he therefore teamed up with a sports psychologist. That helped.

Not that he has completely tamed his brain now. That’s not how it works. Mental counseling is not the solution. A lot happens to your head on a race day. That goes from hot to her. But if you can steer that even a little bit, it can help.’

It’s not easy. He still often has enough that he lets himself be provoked by an opponent or a referee. But at least he has learned that he does not have to put the fears he feels during important matches into perspective. ‘If you think: I’m pretty scared, man. Then you shouldn’t push that away. You have to accept that you have that thought. It can be there.’

Nuis has found his niche under coach Van Velde, where he enjoys a lot of freedom as an experienced skater. He is happy with his girlfriend Joy Beune, skater at Jumbo-Visma. And most importantly, he is healthy.

“I’ve been fit for weeks,” he says with satisfaction, then immediately taps his knuckles on the coffee table. “Knock on wood.” Because you never know with fate.