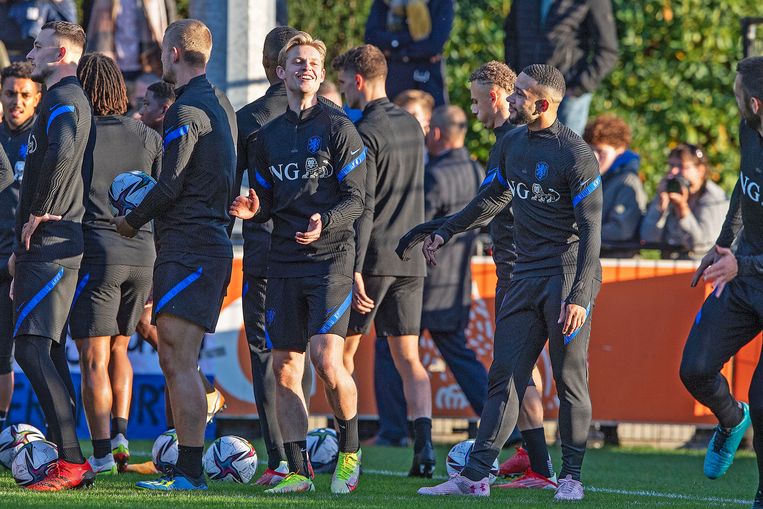 The nice thing about Frenkie de Jong is that he keeps smiling, even in times of sporting malaise. He goes along with criticism quite a bit, although he refutes grievances if his opinion is different. Yes, against Benfica, last week in the Champions League, he could have shot himself in a promising position, trying at the 0-0 score to avert a goof (3-0) in Lisbon. ‘Which can.’

He went to the center, where striker Luuk de Jong hit the ball moderately and a defender saved. ‘In principle, the chance is greater if you put the ball wide. I think I would do that again in the next situation.’

Anyway, two assists and zero goals, even for a midfielder like him, a player who sets the rhythm and gives structure to a team’s game, is a meager balance in the early season. “That’s not good enough.” Not for the first time: ‘I am not a player to be judged by goals and assists.’

He calmly formulates answers in a digital session with followers of the Dutch national team, which is gathered for World Cup qualifiers with Latvia and Gibraltar, Friday in Riga and Monday in Rotterdam. De Jong is in his third season with Barcelona. Lionel Messi is gone, the club is on fire. Isn’t it time to stand up as a new leader, to enter another era? ‘I see what you mean. Messi is the best player ever. He scores 40 goals a year and has 25 assists. Of course I have to demand more from myself, but I’m never going to score 30 goals in a season. I’m not the type of player for that. People can want, ask or demand that, but that’s not going to happen.’

He is the preparatory player, the playmaker who, according to critics, runs too much with the ball, which ends the game. With his qualities, he could take the team more firmly by the hand. ‘It is possible to take it in tow. It’s good if they expect that, and I can do more with that.’ Calling Barcelona a sinking ship is going too far. “I think we still have a good team, especially if injured ones come back.”

The pinnacle of hopelessness

The pinnacle of hopelessness was last weekend’s match at Atlético Madrid, where he found himself at one point as a kind of right winger. He thinks about it to formulate what he thought of it. “The coaches also know that I am at my best in midfield, and that I don’t have to be the deepest midfielder. Sometimes it’s no different, then you sacrifice yourself for the team.’

He understands the comment that it is strange to ban one of the defining footballers to a corner of the field where his specialism is not located. ‘I didn’t expect a right winger either, to be honest. I also don’t think I should play right winger, although I didn’t have to play with chalk on the shoes. I also think it was a one time thing. You also have to be with the coach.’

Camp Nou is gripped by crisis. There is no more money. In fact, Barcelona is in debt of more than a billion euros and the salary cap for this season is less than a hundred million euros, for the entire roster. Roughly the wages of Messi last season. Rival Real is above 700 million. It seems as if chairman Joan Laporta is waiting for the moment that he can fire trainer Ronald Koeman without it costing him too much money. ‘It’s restless. There is a lot of pressure on the boiler. Every day there were messages: ‘Koeman’s days are numbered. He will come, he will replace him.’ I don’t know exactly what it does to him. You have to ask him that.’

Not in the pit

In general: ‘The results drive you crazy, but what happens around them doesn’t drive me crazy. There is a negative sentiment around the club, which is logical. But that doesn’t put me down.’

He is just Frenkie, who makes many a smile. Again, it could be better as far as himself is concerned, but ‘I think it’s quite exaggerated. I’m not in the shape of my life, certainly not, but I don’t play very badly. I think people don’t really look closely at how a player plays football, but what things say based on the result.’

De Jong thinks that Barcelona will rise despite the lousy financial and sporting situation. Only: the club no longer belongs to the top 4 in Europe. The season is not lost. We have two loss points more than Real and Atlético and even have a chance in the Champions League, despite the super bad start (defeats against Bayern and Benfica). We have to start with a good series.’

Being with Orange for a while is nice, just like working with national coach Louis van Gaal. In contrast to predecessor Frank de Boer, De Jong is the only controller in midfield, and therefore more or less tied to the center. Van Gaal is ‘very clear and that’s good, because then you know what is expected of you. You can never say to him that you don’t know what your role is.’