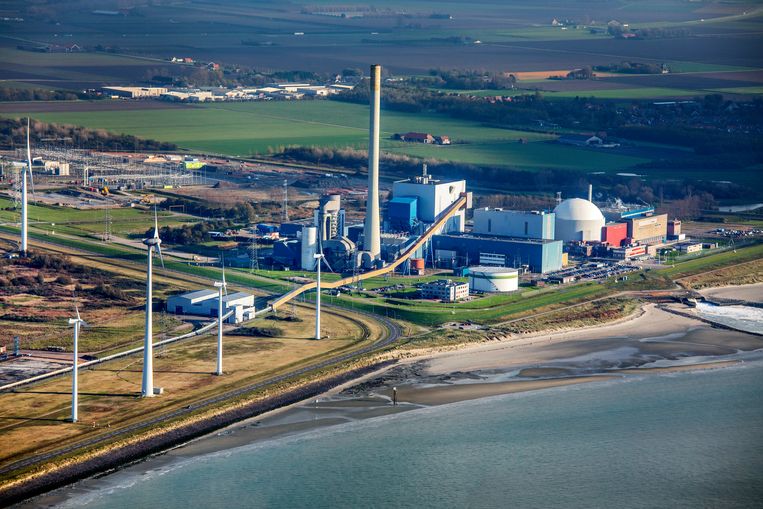 Nuclear energy: for many Dutch people in the 1960s, this contained the lure of a future with unlimited possibilities. The Netherlands was a zealous member of Euratom, the European Atomic Energy Community. In 1965, the country’s first power station for the (commercial) generation of electricity was put into use in Dodewaard. The nuclear power plant in Borssele followed two years later. And it would probably not stop there, according to the then trend watchers.

But the zeitgeist decided otherwise. Nuclear energy, like many apparently ‘neutral’ themes in the 1960s, became politicized. It was not associated with peaceful uses, but with the deployment (or threat thereof) of nuclear bombs. In this atomic-skeptic climate, the PvdA no longer considered it advisable to use nuclear energy. However, under the influence of the (first) oil crisis of 1973 – shortly after the PvdA-dominated Den Uyl cabinet took office – the mood changed again: nuclear energy should reduce our dependence on proven unreliable oil suppliers. At the time, proponents of nuclear energy did not yet make use of climate or environmental arguments.

And so nuclear energy became subject to frequently changing fashions and insights of the day. The Van Agt I cabinet (an alliance between CDA and VVD) was, as Prime Minister Dries van Agt put it, ‘convinced of the usefulness of nuclear energy’. At the same time, he realized that many Dutch people were not yet sufficiently aware of this. With that in mind, in 1979 – after yet another oil crisis – the cabinet gave the impetus to a Broad Social Discussion on Nuclear Energy. “A daring democratic experiment,” said VVD Minister of Economic Affairs Gijs van Aardenne. But the skeptics – predominantly opponents of nuclear energy – saw it primarily as an attempt to break resistance against nuclear power plants.

With the appointment of former minister Maurits Louis (Mauk) de Brauw as chairman of the steering group that had to steer the Broad Social Discussion (BMD) in the right direction, the cabinet only increased the suspicion against the initiative. In the eyes of the skeptics, the fact that De Brauw was noble did not speak in his favor. In addition, he had worked in the corporate world and was (then) a prominent member of DS70, a conservative split-off from the PvdA. He was therefore not expected to receive an open-minded, let alone a critical, judgment about nuclear energy.

However, contrary to what the opponents of nuclear energy had expected and proponents had hoped, De Brauw tried to do justice to all views. “Each individual response was taken seriously,” the Historisch Nieuwsblad later wrote. ‘For example, not only the reactions of the employees of Borssele or the fractions of political parties, but also those of Progressive Warmond, primary school De Vijverberg in Enschede or nudist association De Vrije Vogels from Den Helder. The BMD had to be as broad and as social as possible. ‘

It soon became clear that the information evenings that the steering group organized in the country were mainly attended by opponents of nuclear energy. The desirability or undesirability of nuclear energy was therefore not so much discussed, what was the intention, but a vote was mainly made against nuclear energy. The Algemeen Dagblad, which itself belonged to the pro-camp, asked a sociologist who belonged to the opposition. “Young people, benefit recipients and housewives are well represented,” he said. In addition, the resistance lived strongly in ‘groups around world shops, health food houses and in anthroposophical circles’. The (communist) CPN provided support, but this did not mean that the anti’s could throw money. ‘Thrift is an asset: chains that the protesters use to chain themselves up are bought second-hand. On the bus, on the way to a demonstration, the hat is passed around. ‘

In 1983, two years after the start of the BMD, the steering group completed the information phase with an interim report – the result of nearly 1,900 themed evenings. Energy, too important to be left to experts, was the title. The bulky report mainly yielded themes that would be discussed in more detail during the concluding discussion phase. Later that year, that discussion phase resulted in the conclusion that most Dutch people were against nuclear energy, and that it was better not to build new nuclear power plants. The relevance of that advice was immediately questioned: a previous survey showed that less than half of the Dutch were aware of the BMD.

Partly for that reason, the BMD was widely regarded as a failure. ‘The most shameful display in parliamentary history’, former minister Molly Geertsema (VVD) even said. For him, the BMD mainly testified to political unwillingness to make decisions on tricky issues. Geertsema himself was not bothered by this. As chairman of a committee that advised the cabinet on the storage of nuclear waste, he had cheerfully argued that the explosion risk of semolina is greater than that of nuclear waste. And Prime Minister Lubbers, equally cheerfully, announced the construction of new nuclear power plants. An action group, which adorned itself with the name ‘De Revenge van Jonkheer De Brauw’, established – after consulting documents that had been stolen from the Ministry of Economic Affairs – that Lubbers had already taken that decision before the BMD was finalized.

The debate on nuclear energy was still decided in favor of the opponents after a large amount of radioactivity was released in April 1986 in Chernobyl, in the then Soviet Union, during an explosion at the nuclear power plant there. Subsequently, the mood about nuclear energy changed radically. The percentage of Dutch people who were against nuclear energy rose from around 50 percent to 85 percent. For some time nothing was heard of plans for new power stations (which would have been built on the Maasvlakte, near Eemshaven and Borssele). In fact, the existing power stations were to be closed for economic and political reasons, Dodewaard in 1997 and Borssele in 2007.

For Dodewaard, the prime target of atomic opponents, it was indeed the end of the story. But the closing date of Borssele was constantly pushed back under the influence of changing political moods: first the PvdA stipulated that the nuclear power plant would be closed as early as 2004, then it agreed by way of a concession to the VVD (coalition partner in the purple cabinets). 2007. The Balkenende II cabinet postponed the closure for six years, and the Balkenende III cabinet gave Borssele a postponement until 2034.

Proponents of nuclear energy threw off the shyness. And they no longer had to rely solely on geopolitical arguments, but could also act as saviors of the climate – a theme that previously played a subordinate role in the discussion. Ben Bot, CDA Minister of Foreign Affairs from 2003 to 2007, argued that nuclear energy was inextricably linked to an ambitious European climate policy. In 2006, the government alluded to the construction of a second nuclear power plant to be opened in 2016. Converted environmentalists, such as British chemist James Lovelock, touted the nuclear option as “inescapable.” In the Netherlands, Jan Terlouw, former leader of D66, showed himself ‘very satisfied’ with the resumption of the nuclear energy debate – which had been closed for almost twenty years. “The dangers of climate change are much greater than those of nuclear power plants,” he said. Maurice de Hond concluded that a (small) majority of the Dutch had no problems with the Borssele nuclear power plant remaining in operation until further notice.

The opponents, shocked by a debate that they believed was long overdue, added new arguments to their old arguments – the (presumed) insecurity of the nuclear fission process and nuclear waste storage – the high cost of building nuclear power plants and their susceptibility to terrorist attacks. “Agreeing to build a new nuclear power plant is basically agreeing to build a new terrorist target,” argued Greenpeace.

The Rutte I cabinet, tolerated by the PVV, laid down in its coalition agreement that ‘applications for permits for the construction of one or more new nuclear power plants that meet the requirements will be granted’. According to the Social and Cultural Planning Office, the citizens were open to a resumption of the debate on nuclear energy, ‘provided it concerns an integrated energy policy for the future’. However, fearful for a new BMD, the cabinet chose the parliamentary route. Less than a month before the Lower House was to pronounce on the ‘preconditions for new nuclear power plants’, nuclear energy was again discredited by Fukushima in 2011.

Armored advocates did not allow themselves to be fooled. “We have to take a sober look at what happened,” said Member of Parliament René Leegte (VVD). ‘The worst scenario has taken place in Japan: an earthquake and also a tsunami. Yet nothing actually happened. So the position of the VVD will not change. ‘ CDA minister Verhagen (Economic Affairs and Innovation) was also unyielding: ‘The new nuclear power plant will just be built.’

However, Fukushima had the same effect as Chernobyl – even though there were no deaths as a direct result of the disaster: the nuclear option was hastily withdrawn. Not only in the Netherlands: in Germany Chancellor Angela Merkel threw off her characteristic thoughtfulness, and immediately shut down eight (of the 17) nuclear power plants. Other countries have also decided on a ‘nuclear exit’ or the cancellation of outstanding construction plans.

The wisdom of Merkel’s radical decision is now being questioned aloud. In the Netherlands, nuclear energy turned out to be a dark horse among the election themes. And this week, the Energy Transition & Nuclear Energy Foundation urged the future cabinet with a manifesto to at least consider the use of nuclear energy from 2030 onwards. ‘To achieve the climate goals of 2050, all CO2-free energy sources will have to be used. Dogmas do not match the urgency of the climate problem. ‘ Signatories of the manifesto include former ministers Hans Alders (PvdA), Johan Remkes (VVD), Maria van der Hoeven (CDA), Jan Terlouw and Hans Wijers (both from D66) and former SER chairman Alexander Rinnooy Kan ( also a member of D66). It is remarkable that so many D66 members endorse the plea for nuclear energy: so far their party has been hesitant or dismissive about this option. During the coming cabinet formation it will become clear whether the changing views will also be reflected in new policy.


VVD: In addition to offshore wind and sun on the roof, also focus on nuclear energy (do not exclude energy sources)

SP: Nuclear energy is not a sustainable alternative

YES21: In favor of nuclear energy

50Plus: No nuclear energy without nuclear waste solution

THINK: No position on nuclear energy in election manifesto