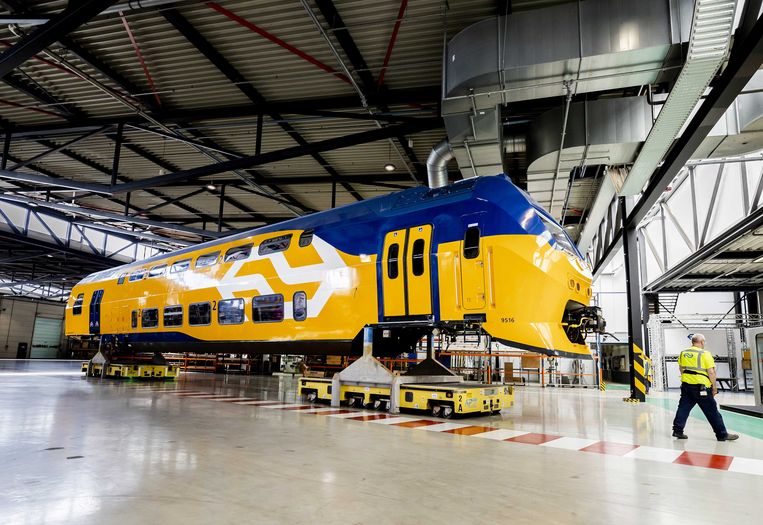 The NS unveiled the first revised double-decker from the Virm series 2 and 3 in Haarlem on Wednesday. The carrier will tackle 46 trains over the next two and a half years, consisting of 242 carriages, between 18 and 16 years old. That costs 400 million euros. That is half the price of purchasing new equipment.

The decision to omit the urinal from the toilets of trains was taken because of the high costs, says project manager Mo Ben Salah of NS Treinmodernisering in Haarlem. ‘Because men don’t aim well, pee ends up on the walls of the toilet, next to the urinal. This results in higher cleaning costs, but maintenance is also more expensive. The floors are resistant to urine, the toilet walls are not.’

The urinal on the wall next to a regular toilet bowl to sit on was just restored a few years ago at the request of the customers. They can be found in the first batch of Virm trains that were prepared for another twenty years between 2016 and the end of last year.

Travelers entering a new double-decker bus will especially notice the innovations on the balconies, the overflow area near the doors. ‘Loveseats’ have been installed there, small two-seater benches instead of the folding seats in the old trains, but also ‘stits’ where travelers can lean against and the ‘cinema seat’, a luxurious folding chair for people accompanying people in wheelchairs.

There are USB ports under the seat cushions to charge mobile phones and in first class there are sockets for laptops near the seats. There are now also cameras in the carriages, which can register incidents.

For these facilities and other innovations, a lot of wiring has been incorporated into the overhauled trainsets – 15 kilometers of cable in an ordinary carriage, 5 kilometers more in the end carriage, which also contains the driver’s cab. The operating equipment therein is not replaced; the cabin mainly gets a cosmetic turn, but also a camera that records collisions.

The revised double-deckers also have a slightly more sober design, with fewer ornaments. For example, the strikingly designed doorknobs that are in some other new trains are missing. The separate urinal may have disappeared in the toilets, but a baby changing table has been placed in its place.

For the overhaul, the trains are almost completely stripped, until there is not much left than the steel hull. The latter explains the high recycling percentage that NS is able to achieve: 99 percent. Many parts that do not or hardly wear, such as banisters, are cleaned and replaced. 15 percent of the parts do not return ‘on’ the train. But a large part of it is processed into other products. For example, old floorboards disappear in table tennis tables.

The overhaul is a logistical puzzle because the parts come from everywhere: the panels for the side walls in the carriages come by ship from China, the toilets first came from Switzerland but now from Denmark and the furniture from Italy. The supply must be adjusted in such a way that a modernized train can leave the workshop in Haarlem every four weeks, including the NS logo standing tall on the sides.