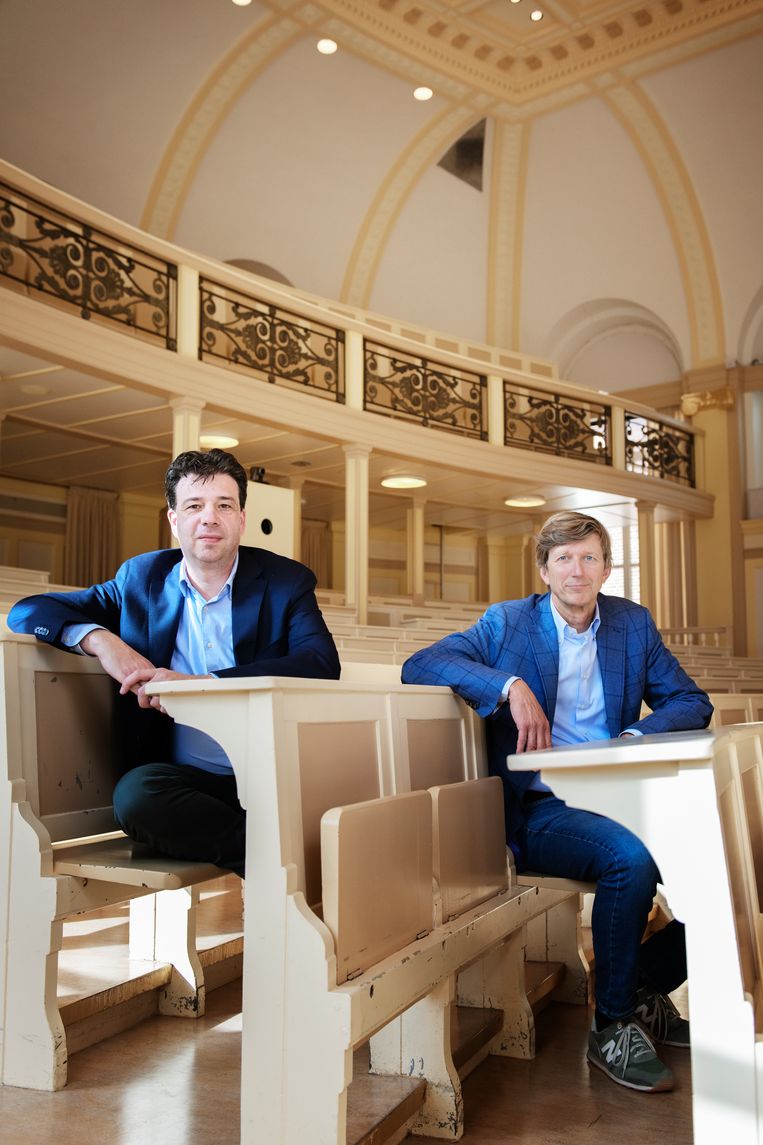 Of course Jan van de Streek was also one of them. A smart kid who knew how to finish a double Dutch in Bermuda. Ask him why he started studying tax law twenty years ago and he’ll tell you plainly what it’s all about. “You just want to make a lot of money, drive a Jaguar.” His colleague, Jan Vleggeert: ‘From the second year on, the students visit the large consultancies that want them, and then they are further captivated and celebrated. You automatically start thinking: what they are doing there, I want that too.’

Now the two men are professors of tax law at Leiden University and they think very differently about the world in which they themselves lived. Both have come to the conclusion: I no longer want to work there. Both have been denounced as nest polluters, or worse. And both now think that the mentality of tax lawyers must change radically, otherwise they will lose their right to exist.

From next year they therefore want to set up a new minor, a study that should make it clear that tax advisers have a greater responsibility than just the rich and help multinationals avoid tax as much as possible. Van de Streek: ‘As a company you can of course always say that you are following the rules properly. But not every hole in the tax system is meant to be crawled through.’

That tension, between what is legally and ethically justifiable, the question of whether you should want what is allowed, became topical again this week by the Pandora Papers. The millions of documents make it clear that criminals, politicians, high-ranking bankers and thousands of others still like to hide their wealth through tax havens such as the British Virgin Islands.

What did you think? Nice, enjoy? Or: here we go again?

Vleggeert: ‘I always think it’s nice when something like this happens. Disclosures like this help tremendously in exposing tax avoidance. Let me put it this way: all the reforms that are now taking place internationally have not been initiated by tax specialists.’

According to Vleggeert, the social outcry after previous revelations has meant that things have changed. But the foundation was laid earlier, after the financial crisis of 2008, when he saw a real change in social thinking. ‘While citizens had to pay the costs of the crisis, large companies simply continued to evade taxes.’ Then, in 2014, tax agreements that Luxembourg had concluded with large companies such as Starbucks were leaked: the Lux Leaks.

Vleggeert: ‘That was really the beginning. After that, the OECD picked it up and more rules and agreements were made, and the view on tax avoidance has really changed.’

Before that, ethics was not a topic of conversation at all, they both say. Van de Streek: ‘When I studied tax law in Rotterdam, you were asked exam questions such as: how can this tax be avoided? You got bonus points if you came up with an even smarter method.’

Were you good at that?

‘Of course. I found it fascinating. It’s kind of a puzzle. You don’t understand morality. That was not discussed.’

There was also a good excuse, which the tax specialists and advisers collectively used to justify the financial tinkering. Van de Streek: ‘The business climate. It was all in favor of the Netherlands BV. Because if we ensured that companies paid as little tax as possible, they would come to the Netherlands. And everyone benefited from that.’

With that idea, Van de Streek and Vleggeert and most of their fellow students started working at a large office after their studies, to apply the tricks they had learned in practice.

And that is still the case, says Vleggeert. ‘Because from the second or third year they do an internship at those companies and what they see then shapes them forever.’ Van de Streek: ‘Then they are indoctrinated with the business climate virus.’

What academic perspective do you place against that?

Vleggeert: ‘That you ask the question whether something is a fair arrangement. That is actually the most important question, that is also the purpose of a good law. Then you come to the spirit of the law. Is this the intention? Couldn’t that be better?’

You yourself have participated. At what point did you realize that something had to be done differently?

Van de Streek: ‘I combined my job as a tax advisor in the corporate world and a professor at the university until 2017. I helped clients minimize taxes at a large tax consultancy. But as a professor I said: we have to get rid of that rumbling. So that was a struggle. At one point I received a message from the board, in which they indicated that they wanted to give substance to the relationship of authority.’

You mean, they wanted to silence you?

‘Yes. Can we talk for a minute, they asked. Then I replied: that is no longer necessary. You can’t tell a professor what to say. Then I left.’

Many others would draw less fundamental conclusions.

Vleggeert: ‘That is the core of my criticism, which I expressed in my inaugural lecture last year. If you work for such a company, sooner or later you will take your employer and your employer’s customers into account. You are not going to say that the tax should go up. You avoid those topics that don’t sit well with your office.’

Van de Streek: ‘I have had discussions about this in intervision sessions, also with colleagues. They said, yes, you have to take all interests into account. If you work at an office, you should also consider their importance. And you don’t. We are a consultancy, and on TV you say letterbox companies need to be cleaned up? I expected them to be able to handle those two roles.’

But you do drive customers away.

But could you do your job well? From a technical point of view: then as a consultant you have to do things at your office that you disapprove as a professor.

‘Look, you always stay within the law, of course, and what I conclude as a professor is aimed at changing such a law. But no matter how legal, at a certain point some constructions become so aggressive that you think: is this still justified?’

How do you do that then? Your colleagues say: we follow the law, these are the rules, this is allowed. How do you then discuss that?

‘Then you get something like the spirit of the law. Is this the intention?’

But that gets very complicated.

Vleggeert: ‘It is indeed difficult to keep up with a customer. I think you can say to them: what is the risk of reputational damage? What if you end up in the newspaper with this? Sometimes you can have this discussion that way. But look at the Pandora Papers. Apparently it is not yet experienced as a problem by many people, or they estimate the risk very low. And the argument that if you don’t do it someone else will, that is of course a problem.’

Van de Streek: ‘That is why we need standards for socially responsible tax advice. That you take some kind of oath. For example, that it is not responsible to pay no tax at all. Anyone who proposes something clever during a technical meeting that goes over the line – if we do it like this we can pay it once and deduct it three times – should be told by his colleagues: that is not the intention.’

An extra precondition for the puzzlers?

‘A kind of code of conduct, which you lay down in law.’

Where was the tipping point for you?

Vleggeert: ‘In 2010 I thought to myself: what do I want to do next? I had helped large companies pay as little tax as possible for 25 years. And I was pretty good at that, I earned a lot. But I thought: what do I want to be proud of, when I look back on my 67th birthday. What have you done? Also because it started shooting. There was little opposition. I was working on a dissertation, then you learn to look at rules differently. I’ve come up with a whole new provision. That cost me a lot of effort. I kept thinking: how can I explain this to my employer? You are constantly thinking: when I come to the office later, what will my colleagues say?

‘Later I drew conclusions from that and started working at the university. I then used my inaugural lecture to discuss the double hats of tax lawyers. The reactions don’t lie. Among tax specialists, 90 to 95 percent reacted negatively to my criticism. ,When I meet people in person, they are very neat, but especially on social media they have gone quite wild. After my inaugural lecture, I stopped looking at social media for two weeks.’

You have profited for 25 years, have a midlife crisis and betray the profession.

“It wasn’t a midlife crisis, more a moment of clarity. But I do get comments like that on social media. ‘Apparently forgot that he himself was a tax advisor for a long time.’ I haven’t forgotten it, but I’ve started looking at it differently. That is diametrically different from what I did the 25 years before, yes, I admit that.’

So later, with that new module, do you hope that students will start thinking that way from day one?

‘For our profession it is a way of survival. Society looks at us: these guys all deliver tax avoiders, paid with our tax money! How long will that last? We have to give our students a broader view.’

Aren’t you actually busy canceling your own profession? Soon you will have a fair and simple tax system, without loopholes in the law. Then there is nothing left to do, is there?

Van de Streek: ‘No, there is always useful work for international tax specialists, such as preventing double taxation. International taxation will always remain a minefield. You want to prevent your clients from walking on a mine.’

Vleggeert: ‘And there is more for tax specialists than international tax planning. But they don’t care about that now. Tax experts could, with all their cleverness, also be involved in the allowance affair. That’s how you could set up the course too.’

Van de Streek: ‘Why is there a professor of international tax law but no professor of taxes for minimum wages? I can’t find them in the Netherlands.’

Could this new training ultimately lead to that?

Van de Streek: ‘Ultimately you need a new generation. Now, in response to those Pandora Papers, you see the tax specialists crawling back into their shells, digging themselves in. The established order says to the juniors: nothing is wrong, storm in a teacup, society has once again misunderstood. The realization must sink in that they themselves have not understood. But the current members of the profession are not going to change. That will only change when we have new growth that looks broader. We hope to sow the seeds for this with the new programme.’