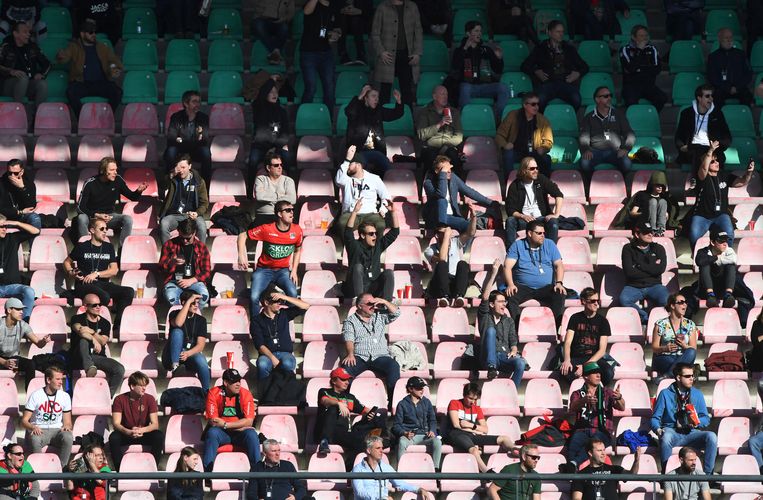 With corona-tested audiences in bubbles, football is slowly trying to return to something resembling the former normal. At NEC – De Graafschap was a test with the public.

Delicious, clear and raw escapes the classic Hi ha dog shit from roughly two hundred throats on the Ron de Groot grandstand, as ventilation of dissatisfaction in stadium de Goffert. Back is the old cry on this sun-drenched spring day, after almost half a year of professional football without an audience.

This scream, in principle inappropriate as the referee’s disapproval, feels like catharsis. About 1,200 supporters will be present at NEC – De Graafschap (1-2) in the first division on Sunday, divided into bubbles. They are back in the stands and react primarily to football. On the referee, on their own team, on everything and everyone. No silence, no tapes. Simply, human, direct and unfiltered.

‘Watching football on TV is also great’, says Daan van Boven in the Ron de Groot grandstand, where the supporters are allowed to do anything. Sitting next to each other. Hug, shout, sing, drink beer and buy sausages. Talk about consumption. Only when they walk, the mouth mask has to be in front. The temperature is rising. They wear short sleeves and sunglasses. Van Boven: ‘I thought I could do without it, but now that I am here, I remember what I missed. This is amazing.’ He also sees the downside, because it is a hassle. ‘Normally I often go with my father, but he wouldn’t do all of this. I don’t care. They can know everything about me. ‘

Because this is where science takes place. Playing football in a laboratory, as a test event of Fieldlab, which investigates how to take the path to the normal of the past. Testing, downloading the app, checking movements, a card linked to the app, keeping your distance this week, testing again at the end of the week. ‘They check our walking lines,’ says Van Boven, pointing to the chip that hangs around his neck in a plastic sleeve. Those running lines could well be more varied than those of the footballers on the field, where the home club is no match for De Graafschap, which is participating for promotion.

Spring is dawning on the square in front of the Goffert stadium in Nijmegen. Scraps of snow around the trees are reminiscent of a previous era. People are finally gathered here again. Greetings. Joy. What the KNVB wanted to contribute to the solution much earlier, is reality. A competition, with an audience.

A hilarious roar can be heard before the break when a player from De Graafschap shoots the ball out of the stadium. The stanza ‘Seuntjens has to take a test’ quickly fades away. Seuntjens is the captain of De Graafschap. Several bubbles are scattered around the stadium. Some supporters wear mouth masks, others sit at 1.5 meters. Everything for Fieldlab, which conducts research at various events and hopes to report in six weeks.

Everyone has been tested for corona in advance and of the 1,200 supporters, about ten tested positive, without having any complaints. Gijs de Jong, secretary general of the KNVB: ‘Those ten would have kept walking around differently, went to the supermarket, to their parents.’

Brothers Tijn and Pim Wiedeman get a drink during half time. Pim: ‘It is still not everything. I still miss the real atmosphere, of being together with many more people than now. But this is the beginning of the end. Or the end of the beginning, I don’t know exactly anymore. ‘ The match falls into the Type III classification, which includes matches in professional football. Category outdoors and active. ‘Visitors are enthusiastic, pleasant and exuberant’, as it is described in the press kit.

The supporterdom awakens. Supporters give each other a box. The press has been massively pulled out. A cameraman asks a group if the boys can keep a little distance. In a sense, the experiment clashes with the nature of the supporter, an individual who likes to blend in anonymously. Van Boven: ‘I know a lot of people who don’t believe in corona at all. They will not come to the stadium like this. They see this as a way for the government to control everyone. ‘ That was a striking aspect anyway. 1,500 cards were available for the experiment, but not all have been requested.

Friday is the start of the experiment. Mandatory testing in a long, expectant queue. The directors of NEC watch as supporters swing from five feet away through the inner space of the stadium, on their way to the baton in their throat and nose. Director Wilco van Schaik is delighted that something is happening again on Stadionplein.

On that Friday there is also consternation about statements made by scientist Andreas Voss, who belongs to the OMT and Fieldlab. He expects it to be difficult, football with full stadiums in 2021. He also puts the presence of supporters in a stadium into perspective. “The KNVB will respond soon,” says director Van Schaik with restrained anger. Gijs de Jong of the KNVB will drink coffee with Voss on Sunday, when things have calmed down, in the hope that scientists will stick to science. ‘This is wonderful. That this is just possible again. ‘

Football craves and needs a public. Without an audience, professional football will disappear, although the KNVB has shouted too loudly at the beginning of the crisis how many clubs would fall over an entire season without an audience. With that scenario looming, no club has fallen yet. This is partly because supporters bought season tickets en masse and the sector receives millions of support, namely NOW funds for companies with employees that have a significant loss of turnover due to corona. Van Schaik emphasizes how important it is that there are a few more games with an audience this season, so that everyone can get the right feeling again and buy a season ticket again.

Supporter Remco Vermeulen is already tens of meters further in line than his friends, before kick-off. “Once is fine, but I wouldn’t do it every time,” he says. ‘On the other hand, a match in the stadium is the best. At home in front of the TV it is as if it matters less. ‘

There is also a street for rapid tests in the stadium. That may be the future for events as long as the virus is among the people. Supporter Paul Pouwels, who has been a season ticket holder for thirty years: “I want to see my club, but I also come to serve the national interest, so that science can gather information to get out of this crisis.”

It comes to a standstill in the stadium when De Graafschap makes 0-1 shortly after the break. Come on Eniesee, the cheers flare up again. When Elayis Tavsan hits the bar with a splash in the name of NEC, a long drawn out ooooooooooohhhh sounds. It’s a wonderful sound. And then, shortly before the end, Tavsan scores with that strong left leg, 1-2. Mugs of beer fly through the air. Tavsan, afterwards: ‘It does something to you when the audience stirs you up like that. It’s a shame we lost, but I hope we still get the chance to give something back to the public for his loyalty. ‘

All or nothing was the last song of the supporters on this Sunday. It becomes nothing, knowing that nothing is the beginning of something again.

The KNVB must let the European football federation Uefa know on April 5 how many spectators it expects to be able to receive at the four European Championship matches in Amsterdam next summer. The association must also submit a backup scenario, in case the corona situation in the Netherlands changes significantly in the last weeks before the European Championship.

‘I have a very unrealistic dream and that is 50,000 people in the Arena’, says Gijs de Jong, secretary general of the KNVB and tournament director in Amsterdam. ‘You always do it for that, but I understand that this is not possible in June. I am realistic: it must be safe and responsible. They are difficult processes. The absolute lower limit is the situation as we had it in September, with spectators five feet apart. Then the stadium could accommodate about 15,000 people. This should also be easy in a good way this summer. ‘