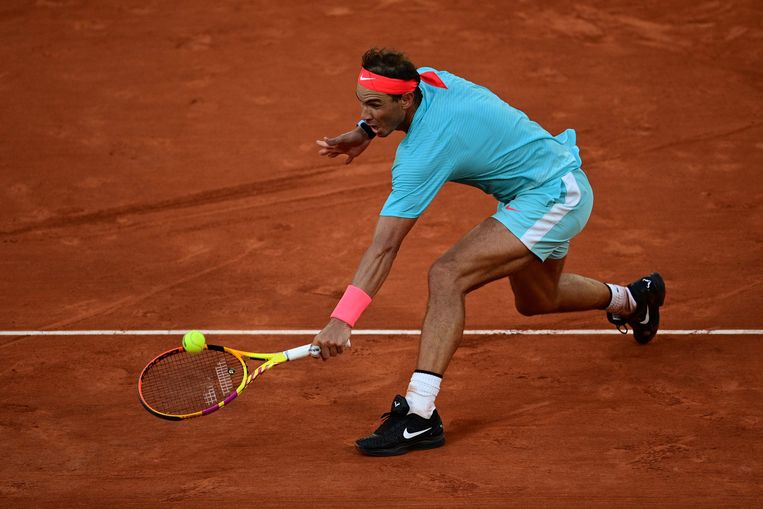 Rafael Nadal complained about anything and everything at Roland Garros. It was too cold to play tennis. The weather wasn’t good for his joints. The balls were too heavy. The track too wet. He did not understand the programming, with five matches on Court Philippe Chatrier, which meant that his match in the quarterfinals did not end until half past one in the morning.

But whatever happens and whatever the circumstances, the twelve-time winner on the clay court in Paris will ‘just’ be in the final on Sunday. On Friday, Nadal settled in three sets (6-3, 6-3, 7-6) with Diego Schwartzman. The 28-year-old Argentinian, who had played so well in the quarterfinals against Dominic Thiem, was also no match for Nadal who did not lose a single set on the way to the final battle.

Nadal ran into trouble a few times in his own service game. But Schwartzman never got a serious chance to get the Spaniard into trouble. Surprisingly, he managed to do that in Rome. On the Italian clay he won by sprinkling with dropshots, but Nadal had paid close attention and did not fall for that anymore. He took a step forward in Paris and directed the Argentinian to a place far behind the baseline where he had few opportunities. ‘What happened in Rome helped me. I went on the road with a plan, with the right attitude. I think I played the right game tactically. ‘

In three hours and nine minutes, Nadal reached his thirteenth final in Paris. It was the Spaniard’s 99th victory on the clay court in the French capital. If Nadal also wins his 100th game at Roland Garros on Sunday, he will be level with Roger Federer and his 20 grand slam titles, a record.

The 39-year-old Swiss has barely played this year. He went under the knife twice because of an injury to his knee and will not be in action for the rest of the year. In that respect, the corona virus suited him well, since there was no tennis for months. If Federer makes his comeback next year, the question is what he can still win in the year of his 40th birthday. Federer won his last grand slam title at the Australian Open in 2018. Nadal won the US Open last year and has been the best at Roland Garros for the past three years.

Nadal only suffered two defeats in Paris in his career. In 2009 he lost in the fourth round to Robin Söderling and in 2015 Novak Djokovic was better in the quarter finals. In 2016 he signed out after his match in the second round due to a wrist injury.

When the circumstances aren’t the way he likes them, Nadal adapts. His resilience makes him better than many opponents, who are quickly distracted by peripheral issues. Nadal was not alone in complaining about the autumnal conditions at Roland Garros, which is normally held in May. In the semi-final against Schwartzman, Nadal played in the sun on Friday, but during his quarter-final against Jannik Sinner, who was only finished at night, it was not warmer than ten degrees.

Many players struggled with the slow conditions on the wet courts. The balls were heavy, Nadal didn’t like that either. His topspin hits so high in dry conditions that his opponents can barely reach it. That merciless weapon was less effective this year, but it won no less.

Nadal plays every point as if his life depended on it. He has been doing this since childhood, and he is still able to do so at the age of 34. The same rituals, plucking his nose, hair and pants for each storage and neatly placing his water bottles next to each other, with the labels in the same direction, give him security in varying circumstances.

In the final, he will take on Novak Djokovic, who had a 2-0 lead in sets in the semi-final, seemed on his way to an easy victory, but ultimately only defeated Stefanos Tsitsipas in the fifth set. The number one in the world from Serbia kept his unbeaten status this year. The 17-time Grand Slam winner is chasing Federer’s record with Nadal, but was hitched when he was disqualified at the US Open. Djokovic out of frustration hit a ball that accidentally hit the throat of the line judge. Because Wimbledon was canceled, there is no chance for Djokovic to match Federer’s record this year.