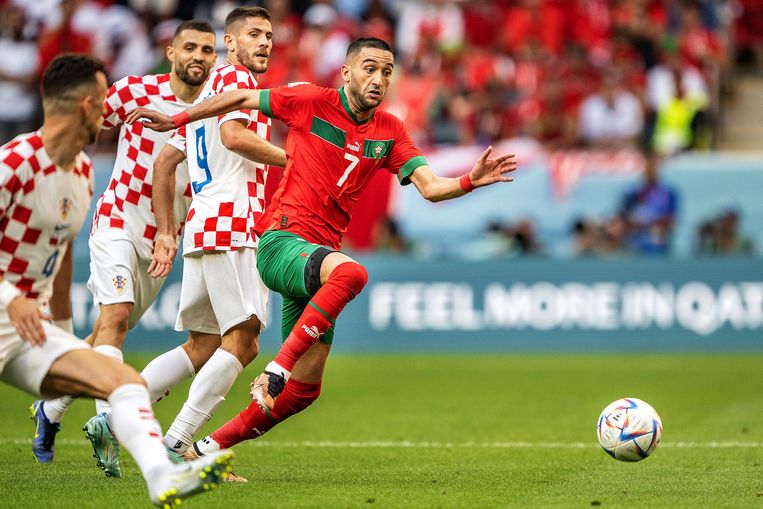 The man in the shirt named Ziyech jumps up and down in the stands. He holds his breath as the real Hakim Ziyech approaches for a free kick. Exciting. Ball in the wall. Unfortunately. He exhales.

After Morocco – Croatia (0-0), Ziyech, the real one, falls on his back. Completely broken, little if he has played at Chelsea. The result fits in with the uplifting performance of Arab countries during the World Cup. Saudi Arabia beat Argentina, Tunisia and Morocco draw against Denmark and Croatia. Is it the growth of the teams? Chance? Is it because of the massive support from the stands?

Sofyan Amrabat from Huizen, midfielder of Fiorentina, throws his impressive torso into battle, sometimes colliding with Luka Modric’s slender body. He gets yellow for kicking Modric. Amrabat, formerly Feyenoord, among others, sees another cause for the rise. ‘France and England are still exceptions with wide results. Today’s football is dynamic, with a lot of power and energy. It’s also tactical. Many teams play from a good organization. It’s hard to score goals.’

Anyway, public support is welcome. Thousands of Moroccans populate the stands. “I just would have preferred the tournament to be held in Morocco,” says Cheddi Ghadiki, expressing a sentiment, because Morocco tried a few times to win the World Cup, but FIFA was the first Arabic-speaking country to choose the capital of Morocco. Qatar, in Asia.

There is money in abundance in that country thanks to oil and gas, and eight modern stadiums have been built. So this Wednesday you see Moroccan flags hanging from cars, on the road from Doha to Al Khor, in the middle of the desert, at the northern tip of Qatar. Al Bayt stadium can be seen from miles away, in the form of a Bedouin tent, with a roof that remains open all the time. With so much effort, the stadium was built by workers for starvation wages in the sweltering heat, and then after the World Cup they tear down the top ring, plus the roof.

It’s too bizarre for words. But that means nothing to all those Arabs in the stadium. “We are one big family,” says Salim Kessabi, the man who wears Ziyech’s shirt. “We went to Saudi Arabia – Argentina with a group on Tuesday and now the Saudis are at our game.”

‘It’s great that the tournament is in an Arab country,’ says Zakaria Aboukhlal from Rotterdam, the attacker who left AZ for Toulouse. He is reserve against the Croats. Qatar is a beautiful country. We are very happy. I think we have the majority of supporters every game. And everyone in the Netherlands is also watching.’

Supporter Kessabi, the young man in Ziyech shirt, was born in Italy and deeply sympathizes with the ups and downs of the real Ziyech, born in Dronten, who, like Noussair Mazraoui (Leiderdorp), returned after the previous national coach was fired. Ziyech alternates beautiful actions with ball loss, hanging on the right. Kessabi says: ‘Ziyech is one of the best players in the world. He’s a wizard, because of the talent in his left foot. And he has a strong personality.’ He also says: ‘If Italy and Morocco would play against each other, I would be for Morocco. One hundred percent. Morocco is my blood.’

Next to him is Ciman Soukari, who lives in Germany. My favorite is Achraf Hakimi. Trained by Real Madrid. Full of ambition, one of the best defenders in the world.’ Previously, Moroccan footballers struggled to break through at the best clubs in Europe. Noureddine Naybet, defender of La Coruna at the time, was usually the answer to the question of which footballer of Moroccan descent reached the absolute top. Now the technicians are reaching higher and higher, waiting for the World Cup breakthrough. Hakimi plays football at PSG, Ziyech at Chelsea, although he is hardly ever allowed to participate there. Mazraoui, left back on Wednesday, plays football for Bayern. He falls out in the second half after he wants to score a falling goal.

Finally, one of the Arab countries really wants to go far, at least in the quarterfinals. Morocco reached the last sixteen in Mexico in 1986, the Saudis in the United States in 1994. Algeria’s victory over Germany in 1982 is famous, although it remained without reward, because Germany and Austria struck a deal in the final round.

Zakaria Aboukhlal is positive: ‘It wasn’t bad for a first match. Win two more games and we’re done. We have new players, a good team and a good coach, with good tactics. We can create something nice.’

An hour after the game, the real Ziyech walks past the press. Hair styled, red sunglasses. No, he won’t say anything. He leaves that to the man in the stands with a Ziyech shirt.