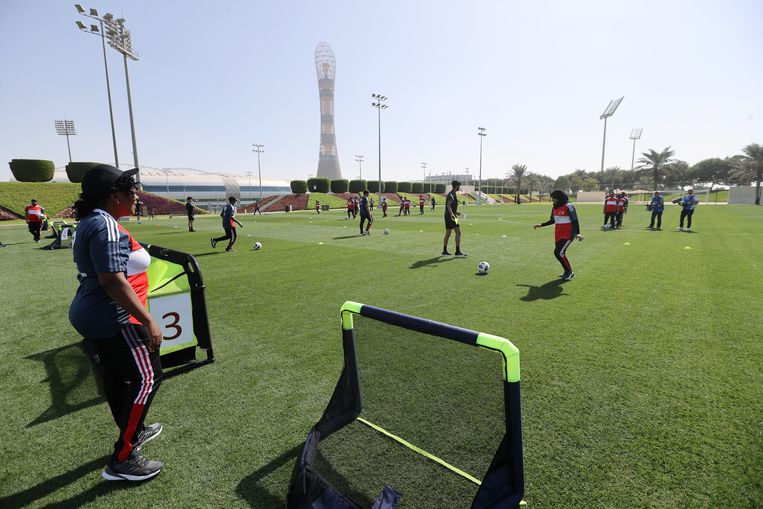 A boycott of the World Cup in Qatar in 2022, after all, after all the discussion? James Dorsey, a journalist and professor specializing in the Middle East and writer of a blog about football in Asia: ‘Who do you have with that? The Muslim world already feels attacked regularly. If they take Qatar away from the World Cup, the consequences will be far greater than a boycott is worth.”

No, the World Cup in Qatar continues despite continued resistance, calls for protest from individuals and some unions, the demand for action, the demand for better working conditions for workers. Tuesday is the kick-off of the Arab Cup, as a test of the World Cup sum, in six stadiums in Qatar.

‘The sports world is in a split over the World Cup and that feeling is permanent’, says sports philosopher Sandra Meeuwsen. ‘It’s a matter of going through the car wash over and over again. Any incident, such as last week involving two Norwegian journalists who were arrested trying to film stadiums, will feel the discomfort and spark the discussion. It will stay that way until the World Cup. How will everyone relate to the tournament? The players will continue to receive questions, including about the policy of the KNVB. Are we satisfied with what the KNVB is doing, by hammering away in relative silence on improvements in circumstances into the distant future? It will never be a nice party. Moral dilemmas remain attached to this World Cup.’

Critical enough. The lack of football culture, the dubious allocation in 2010, the ban on homosexuality, the treatment of workers from migration countries to World Cup infrastructure. Journalist James Dorsey, of the Middle East Institute at the National University of Singapore, first visited Qatar in 1976, when there was virtually nothing but desert, to discover large oil deposits.

He has a different view on developments. He sees a lot of envy towards Qatar, since the allocation of the World Cup. ‘Too hot, too small, no history. But who decides how big a country has to be for a World Cup? And if the Qataris want to spend a lot of money on infrastructure: let them, it’s their money. They think it is worth so much money. It is also part of their defense strategy. A country with 300 thousand Qataris and almost two million immigrants, sandwiched between the superpowers Saudi Arabia and Iran. They can never defend themselves. This is their policy of soft power.’

He also contradicts or puts other objections into perspective, such as bribery in the allocation, for example. The allocation of the 2006 World Cup to Germany was also not free of corruption. What we don’t always understand in the rest of the world is that the culture of doing business in Fifa and in the Gulf region is similar. Fifa is bound by the international standard, but mainly uses it when it suits.’ He sees one major flaw in the organization: communication. “When Qatar won the election, they thought that from then on everyone would be in favor of that World Cup. They were unprepared for endless stories of corruption and workers’ rights. Nobody had raised these matters in the Gulf region before, while everything has been going on there for years, including the construction of all those other buildings, for example by multinationals.’

According to Dorsey, Amnesty International, Human Rights Watch and other organizations are free to move in Qatar and make reports. No other country in the region has made such progress, in workers’ rights, for example. ‘Only the implementation of those new rights is still bad. Those Norwegian journalists are not the first to be arrested and deported. They probably won’t be the last either. That is a result of the burned-in attitude at Qatari. They have no democracy. Qatar is an autocracy in which it is difficult to deal with criticism and transparency.’ Dorsey is nevertheless in favor of the World Cup in Qatar, even though he remains a critical follower. He will be visiting the country again soon.

The irregularly held Arab Cup tournament has been officially embraced by FIFA for the first time, with a field of sixteen Arabic-speaking countries; ten from Asia, six from Africa. Top countries such as Morocco and Egypt do not come up with their strongest selections. The tournament takes place in six World Cup stadiums. Bert van Marwijk is active as national coach of the United Arab Emirates. Iraq has Zeljko Petrovic as national coach, who remained after Dick Advocaat and Cor Pot resigned last week. Mo Osman of Sparta has been included in the selection of Syria.