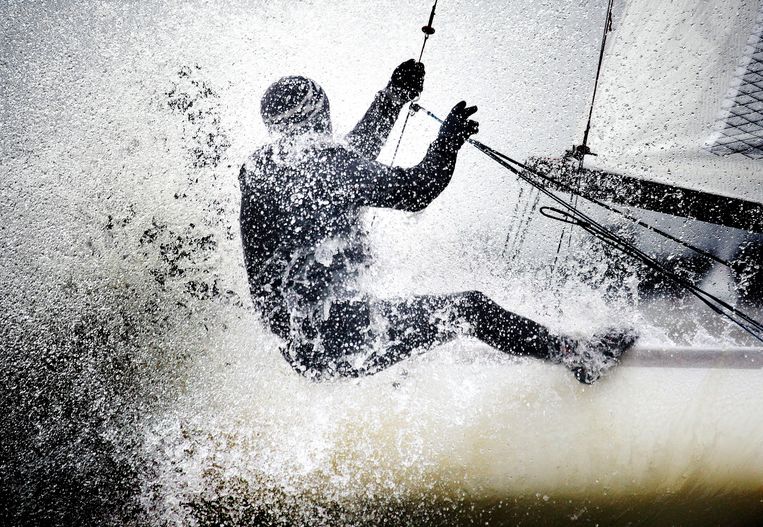 This, the brothers Marcel and Alex Hanenberg, manager and administrator of the Regatta Center Medemblik, gesture from their office, is why competitive sailors like to come here. There, behind overgrown dams, a northerly breeze brushes foaming ripples on the water. On the bilge are windmills, like white-painted blades of grass. That counts. Space, infinite space. Wind, always wind. And no salt on the face.

It is no longer a blessing for everyone. Last week, the Dutch Water Sports Association, organizer TIG-sports and main sponsor Allianz unanimously announced that Medemblik will lose the regatta, the largest multi-day international sailing competition in the Netherlands, to Almere. This brings an end to a 36-year history. That cuts in, on the IJsselmeer. Alderman of sports Joset Fit (Municipality interests): ‘This is sour, quite sour.’

The organizers will include the competition in the World Cup next year in a Dutch Water Week on and around the Markermeer, ‘where water sports come together in all its pluriformity’. Think of: trade fairs, demonstrations, a regatta for cabin yachts, sloop trips in the evening. ‘Old wood’ (rainbow, sixteen-square) meets carbon fiber (49’ers, 470’ers). Watersports association director Arno van Gerven: ‘We think there is room between Sail Amsterdam, which attracts millions of people, and sailing competitions that are not followed by anyone.’

In the office at the marina of Medemblik, the Hanenberg brothers emphasize that competitions will still be sailed here. In 2019, in addition to the regatta, they recorded 55 days with competitions on the water. They confirm that the residents were not warm to the event. Alex Hanenberg: ‘There used to be a lost Medemblikker on the dike. He said, “Oh, how cold! Then he was gone again.’ Brother Marcel: ‘It is impossible to tie a rope to such a match from a distance.’

The regatta was of value. At the end of May, beginning of June, the parking lots filled with cars and boat trailers and hundreds of sailors, from about 50 countries, and their entourage moved into hotels, the Zuiderzee holiday park or camped nearby. In 2019, it was calculated that the regatta generated 140,000 euros in extra spending.

Lack of money cost Medemblik the event. The municipality contributed 40 thousand euros annually. Almere was prepared to put the fivefold on the table. Alderman Fit: ‘Such an amount is far beyond our capabilities.’ Alex Hanenberg: ‘It is what it is. The event is chasing the money.’

According to Van Gerven of the Watersportverbond, the proximity to Amsterdam also played a role. “You reach more people.” It also fits in with the strategy of the international sailing association World Sailing. The proximity of a metropolis gives competitions more allure.

Perhaps the regatta was already leaving the West Frisian town a bit. Ask Jack Brakeboer, the owner of the cafe of the same name on the Oosterhaven, a household name among older sailors in cities such as Melbourne and Rio de Janeiro, according to him. Inside hang pictures of Olympic teams, from 1992, from 2012.

He looks back on the early years, when the event was still called the Spa Regatta. ‘It was one big folk festival. All the boats were still here in the inner harbours. Participants simply changed on deck, half naked. Many stayed overnight at the Medemblikkers’ homes.’ He remembers a Spanish sailor. ‘She had to go to Sweden for a European Championship, I believe. A few days later she was here again. She insisted on eating another bouncer.”

There were complaints about the crowds. Trailers blocked the streets, noisy bystanders stirred into the wee hours. From 1999 the circuit settled in the new Regatta Center, along the dike, with better facilities, such as changing and meeting rooms, a service post and a restaurant.

Brakeboer: ‘It is less appealing, such a concrete environment. It is better for the sailors. They have to go to the gym these days, some bring their own cooks. It became more and more professional. But not cozier.’ Brakeboer now presents itself as a food and music café.

Top sport in a pinch

The fact that Medemblik also lost the World Cup status in 2013 and only regained it this year did not contribute to the image, although a reputation had been built up with innovations, such as the first experiments with medal races (races just under the shore) and track systems. . International toppers started to avoid Medemblik, the number of participants decreased. The hope was that with the recent entry of Allianz as main sponsor, the tide turned.

The hangover about the departure is accompanied by concern about the sequel in Almere. For example, the intended location for most activities, Marina Muiderzand, would lack the necessary infrastructure. Pieter Kok, member of the organizing committee in Medemblik since 2009, fears that top sport will disappear to the margins during the Dutch Water Week. ‘Olympic sailors are not looking forward to such a fair around it.’ According to him, sailing competitions will never become crowd-pullers. ‘Forget it. This isn’t Formula 1. You don’t see what’s happening on the water ahead.’

A potential obstacle lurks underwater: pondweed. In the Markermeer, the aquatic plant, which starts to proliferate from mid-May, is a plague for water sports enthusiasts. An experienced race director of the regatta, Alex Hoeve, is not reassured. “Sailors demand predictable conditions so that you get a fair race. That won’t work with pondweed.’

He does not rule out dangerous situations. ‘Sometimes speeds of 50 kilometers per hour are reached. If you suddenly end up in a truss like that, you’ll go off really fast.’ Another concern: the proximity of shipping routes, such as the one from Amsterdam to Lelystad. Hoeve: ‘I don’t see very quickly how you can build five competition courses somewhere without coming close to shipping.’

The organizers speak of ‘challenges’. But it will be fine, a spokesperson for TIG Sports declares. There are still plenty of places without pondweed. You can also mow. Mutual coordination is necessary to prevent shipping and racing sailors from crossing each other. Local associations also succeed. At Marina Muiderzand, consultations are already underway with owners about the use of their facilities.

What do sailors themselves think? Lobke Berkhout, five-time world champion, lives in Hoorn. She has a soft spot for Medemblik, she was on stage there. ‘But something had to change. Without the World Cup it wasn’t much anymore. As an organization you also look to the future. I think it would be fun, such a broad event.’

It can also be wide in Medemblik. Just visible from the Regatta Center window, a botter glides past. Slow, yes, but plenty of space and enough wind.