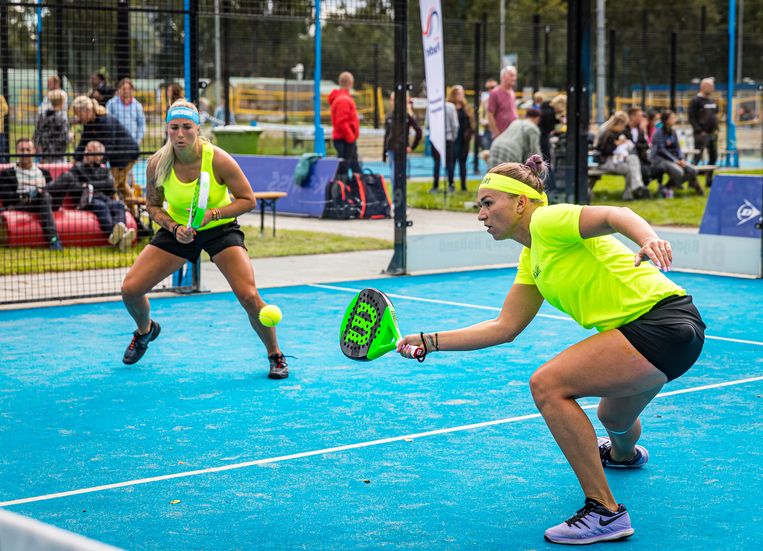 During a walk through the Portuguese city of Braga with her 1-year-old son Valentijn, the telephone that Michaëlla Krajicek uses with de Volkskrant image suddenly bubbles from her face to her stomach and legs. Those eyes are very toned. Krajicek (33 years old) has been a professional tennis player for three years now, but has become addicted to another racket sport: padel. In three quarters of a year she rose to number 2 in the Netherlands, and in the coming year she wants to find out whether she can also compete internationally. ‘I notice that I am becoming ambitious again,’ she says cheerfully, while searching for a playground.

As a tennis player, Krajicek won three WTA tournaments, was 30th in the world ranking and reached the quarterfinals of Wimbledon, the tournament that older brother Richard won. After years of injury to her knees, she stopped working, became a mother in August last year and spent the past two weeks traveling with her boyfriend, the professional tennis player Jelle Sels, to Italy and Portugal. ‘I had to take a break from padel, my body was really tired,’ she explains.

It shows how fanatically she is working with the sport that came over from Latin America and is rapidly gaining ground worldwide. Padel courts are popping up everywhere in the Netherlands too. Krajicek tried the sport three years ago at her tennis club, Amstelpark, alongside good friend Steffie Weterings, now the number 1 in the Netherlands. ‘There were some well-known former football players who asked if I could participate.’

Laughing: ‘Landzaat? Perez? Is that possible? Later I played against Robin van Persie in Rotterdam, he’s really good by the way!’ Her background as a professional tennis player helped her. ‘It’s a lot of fulling, smashing. And even if you play with a completely different racket (smaller, thicker and with a foam head instead of strings, red.), you still benefit a lot from your feeling for the ball from tennis.’

Only her dreaded serve in the tennis circuit – in 2007 she hit the most aces of all women at Wimbledon – is of no use to her, because underhand serve is mandatory in padel. ‘It’s also much more tactical, you’re in a glass cage, you have to use the glass walls, that’s the hardest part. Rallies are not just finished after a hard blow, because that ball comes back from the wall and then you can just get a smash around your ears.’

That happened to her literally once, resulting in a large bump. But otherwise padel is ‘not nearly as hard’ on her body as tennis, which is played on a larger court, and requires more running and explosive power efforts, especially in singles. Padel is always two against two. “Still, padel can be strenuous because rallies take longer. Especially at the top, where girls sometimes run out of the cage to get a ball.’

During her tennis career (2003-2020), Krajicek was often under great pressure, because at that time she was just about the only Dutch tennis player who could compete at a high level. The competition in tennis is extreme, also because of the large prize money. With padel, everything feels more casual, with a lot of noise on and around the small, sandy artificial grass courts. It is technically easier to learn, and in many countries still mainly the domain of amateur players. The top players almost all come from Argentina and Spain, where padel has been the second sport behind football for years, and have excellent sponsorship contracts.

Due to corona and her pregnancy, Krajicek’s padel racket disappeared into the closet for a while, but pretty quickly after the birth of Valentijn she picked it up again and immediately won some tournaments without serious training. ‘I play with a good partner, which makes a difference. I’m taking it more and more seriously, now I train almost daily with a coach, and then you make quick steps. We win a lot, also from players from Belgium, Germany and Sweden.’

The disenchantment followed during a FIP Gold tournament in Alkmaar where she and Weterings met a Spanish duo that is in the top 50 of the world in the final. Laughing: ‘We were really slaughtered, just outrageous. 6-0, 6-0. We could have won four games, but not more. Logically. Those girls have been playing it in a real padel country for fifteen years, I’ve only been doing it seriously since December.’

A litmus test will follow at the end of October at the World Cup in Dubai. ‘So for the first time I will not see my son for nine days. Curious how that is.’

There is still a lot of stretch, and there is still time. People in their forties are at the top, she knows. “But I should really move to Spain and train there twice a day with top players and top coaches to get really high on the rankings. I don’t care about that. I would like a little brother or sister for Valentine’s Day. Until then, I’m going for it, and I also want to play international tournaments.’

She is enjoying her second top sport life. ‘There is not a lot of pressure on it yet, but I do feel that competition tension more and more. When you stop as a top athlete, you constantly long for that.’

The earnings are meager. Her last win at a major national tournament brought her 250 euros. ‘There was still 25 euros registration fee deducted. Oh, that doesn’t matter. We already have a few good sponsors, which shows how popular the sport is in the Netherlands. But money is zero motivation for me. I just like it, keep fit because of it.’ Laughing: ‘That has to be done with a friend who is a top athlete and more than six years younger.’

Even her father Petr, a recognized tennis fan and coach, has fallen for padel after Michaëlla explained the rules to him. Yet tennis remains her greatest sporting love. ‘In tennis you can add more variation, you have to hit the balls more cleanly.’

After her forced tennis retirement, she thought she could no longer find an activity that makes her happy. ‘Richard loves cycling. He has often tried to seduce me to come along, but I think that is really terrible. Richard also likes padel, but the level is much higher with the men. We are too fanatical athletes to do anything without a chance of making a profit.’

She deliberately skips the largest tournament that the Netherlands will visit, the World Padel Tour in Amsterdam, which starts on September 28. ‘The world top is there, I really wouldn’t stand a chance there. First I want to train and play fully for another year, also internationally.’

She takes out a miniature tennis racket from the pram. Gift for Valentine. ‘There will still be a padel racket. Although my boyfriend prefers that he become a footballer.’