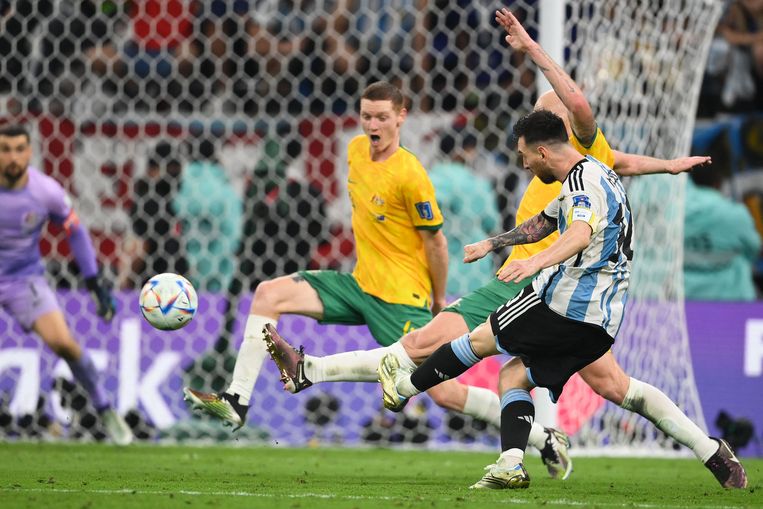 Messi framed his thousandth game in his career with a golden edge, by giving the searching Argentina the lead after just over half an hour. For a moment he rose above all the other players as he played the ball, ran through, received and shot accurately and quickly. It was his ninth goal in a World Cup and his first in the knockout stage.

Argentina, one of the favorites for the world title, won against Australia in the round of 16, but did so with some difficulty. Messi distinguished himself especially after the break with beautiful dribbles and fine passes, but also had to watch how Australia, a team built on character, remained promising until the final whistle. Twenty seconds before the end, the substitute Garang Kuol missed from close range.

So, just like at the World Cup in 2014, the Netherlands will meet Messi’s Argentina. Eight years ago, Argentina won the semi-final on penalties, only to lose the final to Germany a few days later. Now the Lusail stadium is the venue for the quarterfinals, Friday evening at 8 p.m. A poster that has been secretly awaited for a long time.

Before that, Argentina first had to deal with Australia, after the Netherlands had already defeated the United States earlier in the day. After the 2-0 after an hour of play, Argentina thought they had the spoils, but Australia again showed that hard work and not giving up can get you to an end, leading to an exciting and exciting final phase.

Australia played football according to possibilities and initially limited itself mainly to defending, because it simply has less quality than Argentina. This created a logical game image, in which Argentina had the ball, but hardly any ideas. Messi’s goal ten minutes before the break was therefore the first shot on target.

It was the period when Australia increasingly reported to the opponent’s half, because Argentina – whether intentionally or not – allowed it. Australia was looking for keeper Emiliano Martínez, but the team of national coach Graham Arnold did not become really dangerous. Tall central defender Harry Souttar came closest to scoring. His header from a corner kick lacked power.

Argentina turned out to be the team of the progression this tournament, with the painful defeat in the first game against Saudi Arabia, followed by good victories and better play against Mexico and Poland. Parallel to this was the performance of Messi, who showed his class with an important goal against Mexico and old-fashioned dribbles against Poland.

After the victory over Australia, Argentina can still hope for the first world title since 1986, which will always be linked to Maradona. Messi’s goal before half-time was an eruption of brilliance in a game in which he became more involved in the game, especially in the second half. ‘Messi, Messi, Messi’, rolled from the stands after a solo from his own half.

The tough Argentina didn’t even play football well, but relied heavily on Messi’s qualities in the second half and benefited from a blunder by Australian goalkeeper Mathew Ryan. The keeper did not process a back pass properly and lost it to Julian Alvaraz. The striker pushed the ball from close range into the empty goal, so that the game seemed to be largely stripped of its tension.

But Australia, who had beaten Denmark in the group stage, showed their true character and came back into the game through an own goal from Enzo Fernandez. The Argentine unintentionally converted a shot from substitute former Spartan Craig Goodwin.

Argentina forgot to make the liberating 3-1 in the final phase and on the other side Aziz Behich and the substitute Kuol still had chances. But there were no more goals, so that the Netherlands knows that it will have to deal with Argentina in the hunt for the world title.