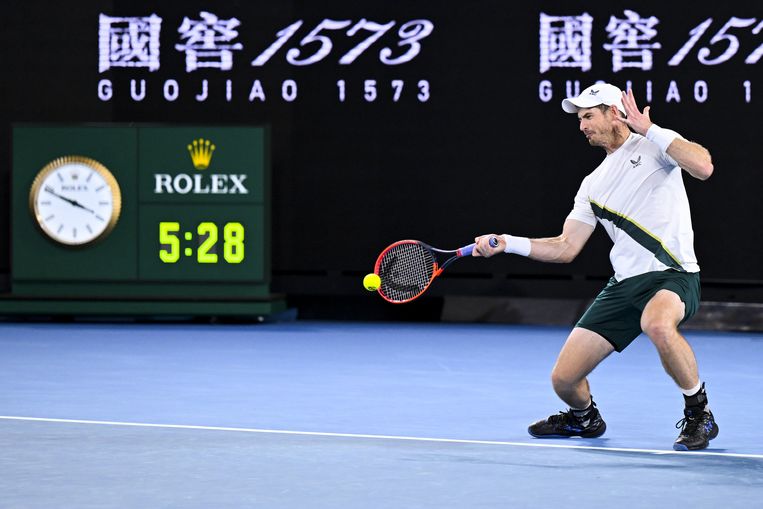 It was almost dusk in Melbourne when Andy Murray made the winning run against Australian Thanasi Kokkinakis at 04:06 local time on Thursday morning. ‘Why are we doing this? That’s what sometimes went through my head during the game,” said the 35-year-old Briton.

The three-time Grand Slam winner said he fought an “epic” fight of 5 hours and 45 minutes with his opponent, but called the late end time of the match “a farce” at the press conference. ‘Who benefits from this? It’s no use to the referee, I suspect the spectators don’t like it and it’s not good for the players.’

It has long been a thorny issue in tennis: matches that last well past midnight. Although many tennis players are not in favor of it, it is becoming more common. The US Open and Australian Open have been played well past midnight for decades. Two years ago, Roland Garros tacked.

With a new roof and artificial lighting on Court Philippe-Chatrier, it became possible to play well into the night in Paris as well. Last year, half of the quarter-finals ended when a new day had already begun. There is only an end time at Wimbledon. Because of the nuisance for local residents, tennis is only allowed until 11 o’clock in the evening.

“I was surprised that many spectators stayed to the end,” said Murray. ‘I respect that. I think there were also people who had to go to work the next morning.’ Only once before did a match at a grand slam tournament end later: in 2008, Lleyton Hewitt and Marcos Baghdatis shook hands at 4:34 am at the Australian Open.

Murray was not the only one to voice his displeasure. Tennis legends also made themselves heard on social media. “No other sport does this,” said eighteen-time Grand Slam winner Martina Navratilova. “We need to make better rules regarding the weather and the start and end times of matches.”

For tournament director Craig Tiley, the fierce criticism was no reason to take another critical look at the Australian Open schedule. “You would assume that you could play two games between 7 and 12 a.m.,” he told Australia’s Channel Nine to the evening program. ‘When you plan a game around 10 p.m., you don’t expect it to last nearly six hours.’

Jamie Murray, doubles specialist and Andy’s brother, suggested scheduling just one game during the evening session. But that’s not an option, according to Tiley. “If a player gets injured, you have no alternative to the fans and broadcasters,” Tiley said. He acknowledged that the television contracts concluded are also a reason to play out parties.

Tennis is a sport that is watched all over the world. Morning may have almost dawned in Melbourne when Murray qualified for the third round, in Europe it had just been 6 p.m. at that time. In New York, the afternoon had just begun.

A lucrative deal for the broadcasting rights was also the reason for Roland Garros to start an evening program two years ago. The tournament organization concluded a million-dollar contract with Amazon. In exchange for a bag of money, the American streaming service was allowed to broadcast ten evening parties.

“I think we’re starting too late,” said Novak Djokovic last year after he had to admit his superior to his eternal rival Rafael Nadal in the quarterfinals in Paris at 1:15 am. ‘But it’s the television that decides. That’s the world we live in.’ Nadal joined in. “I understand that TV pays a lot of money and that we as players also benefit from that. But we will have to find the right balance.’

For Murray, it was by far the longest fight he had fought in his eighteen years as a professional tennis player. And that with a metal hip, which the five-time losing finalist in Australia had installed four years ago. “I felt good on the track. But, yes, not being ready until after 4 am is not ideal.’