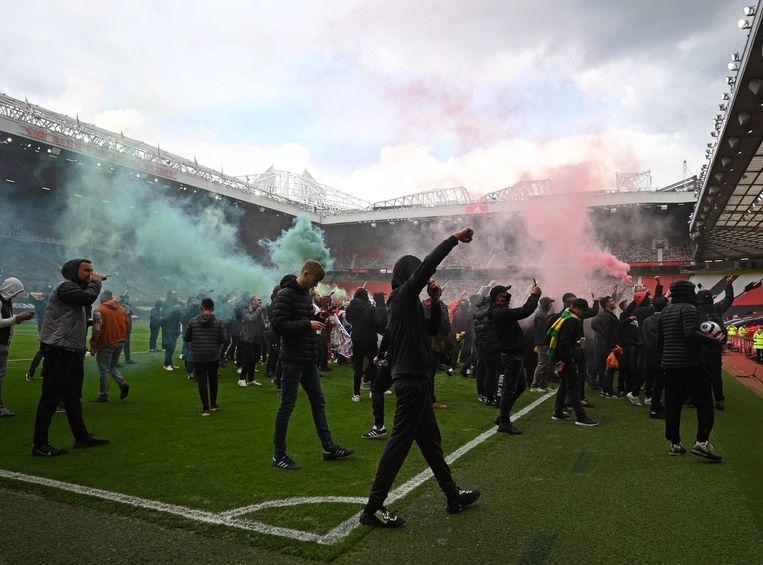 The line of defense the stewards put up at Old Trafford proved unable to withstand the enraged fans of the world’s richest club. Several hundred managed to make their way to The Theater of Dreams, where they had not been for a year due to corona measures. They didn’t come to watch football, but to express their dislike for the Glazers.

They kicked a ball, they ran across the field with corner flags in their hands like spears, and some hung in the nets of one of the targets. Fireworks went up, as well as some bottles.Glazers Out, was the clear message. The apologies Joel Glazer had made in writing after the failed European Competition adventure was not enough. Sixteen years of Glazer rule are more than enough for the club loyalists.

In those years, the Americans have drawn a lot of money from the club. On the other hand, there were successes, such as winning the Champions League, but no league title has been won since Alex Ferguson’s retirement in 2014. After their straw man Ed Woodward had resigned as chairman two weeks ago, according to the fans, it is now the turn of the Glazers, but they have already indicated that they do not want to get rid of their cash cow.

While the fans were on the field, the players of both teams were still in their hotels. The home side could see out of the windows of the Lowry the angry fans who had surrounded the expensive Salford hotel. The hope that the classic against Liverpool could continue flew by the minute. An hour after the kick-off was due, the club announced that the game had been canceled. It would be too unsafe.

The Premier League condemned the protest, but former players like Gary Neville and Roy Keane refused to criticize the supporters. The fans of Liverpool and Arsenal are also fed up with American investors. The postponement means that Manchester City will have to wait at least another week for the championship. If United lost, the Citizens became champions for the fifth time after the Arab takeover.