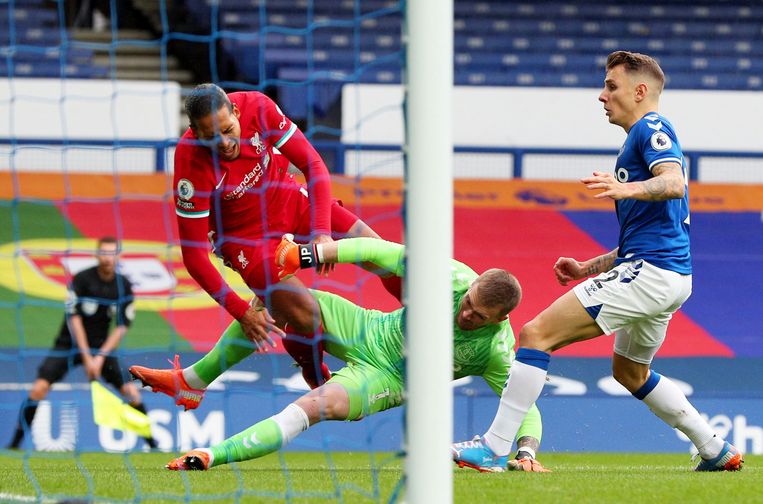 Hard tackles are not uncommon in English derbies, especially when the stakes are high. And that was the case with the 235th edition of the Everton-Liverpool derby. Fiercely at the top of the Premier League, Everton smelled the chance to finally win again after ten years against big neighbor Liverpool, which had lost 7-2 at Aston Villa two weeks ago.

At Goodison Park, however, the guests came to 1-0 after three minutes thanks to Sadio Mané who completed some handsome teamwork. What happened again three minutes later will be talked about for a long time. A cross floated towards the rising Van Dijk, who was on the edge of offside when he was torpedoed by the pumped up goalkeeper Pickford. It was a copy of his attack, two years ago, on Tottenham’s Dele Alli.

Van Dijk’s standing leg bent. The 27-year-old was lucky that the leg did not snap, but instead the cruciate ligaments were damaged. Although he had a good view, Michael Oliver, England’s best referee, judged that nothing was wrong. Video referee David Coote also saw, to everyone’s surprise, nothing improper. The goalkeeper may still be suspended.

After a treatment, Van Dijk tried to continue playing, but after five minutes it was no longer possible. In the hospital it turned out to be very wrong. Without Van Dijk’s colossal presence, Liverpool’s rearguard is vulnerable. Ten minutes later, Everton tied the score with a header from Michael Keane. That scenario was repeated. After Mo Salah shot the Reds 1-2, Dominic Calvert-Lewin headed in the tying run.

The derby was appropriately closed with a new VAR drama. In injury time, Jordan Henderson appeared to have scored the decisive 2-3, but Coote saw something no one else had seen: Mané’s shoulder would have been offside in the run-up. After the game, Liverpool did an unusual thing: it requested the referees’ association for a text and explanation of the two catastrophic decisions.

Coote had also been discredited last season when he did not see as VAR that Tottenham Hotspur’s Giovani lo Celso had deliberately stepped on the ankles of Chelsea captain Cesar Azpilicueta. For Van Dijk, who has not missed a league game since 2018, it is a drama. And Liverpool? That has to sail without a mate on a sea full of sharks called the Premier League.