The second election debate between US President Donald Trump and his Democratic rival Joe Biden on the night from Wednesday to Thursday was a lot more substantive and less chaotic than the first. Whether it will win over many voters remains to be seen.

The president was calmer and allowed his Democratic rival to finish his talk more often. The moderator, White House correspondent Kristen Welker of broadcaster NBC News, was partly able to keep more control over the debate than her Fox News colleague Chris Wallace.

Welker acted decisively several times to get the candidates back on schedule. Although he openly questioned her impartiality in the days before the debate, major clashes between Trump and Welker failed to materialize. He even complimented her.

For both candidates, the debate was the last opportunity to present itself to a wide audience of tens of millions of Americans.

‘We are about to enter a dark winter’

The pandemic was the subject of the opening question: if you become president, how will your government deal with the crisis?

Experts say that the US is now dealing with a third wave of corona infections. Especially in the less densely populated states in the American Midwest, such as North Dakota, South Dakota and Iowa, the number of cases is increasing rapidly, but an upward trend is also visible elsewhere.

President Trump praised the experimental medications he received after his own corona diagnosis, saying that two pharmacists will complete their development of a vaccine “within weeks” and that the US armed forces will spread it across the country very soon. “It will just go away,” he said of the virus several times. “We’re almost out.”

Biden accused Trump of painting too rosy a picture and accused his administration of doing “next to nothing” to stop the spread of the virus.

He warned that experts predict another 200,000 American deaths by the end of the year. “We are about to enter a dark winter, a dark winter, and he has no clear plan.” About his own dream policy, he said he will urge all Americans to wear masks and provide more testing capacity nationwide. Donald Trump and Joe Biden during the debate, moderator Kristen Welker in the background. (Photo: ANP)

As an extension of the pandemic, concern was discussed – traditionally one of the most important election themes and this year, of course, extra acute.

“What I would like to do is much better healthcare,” Trump said, without explaining what that should look like. Republicans have promised since the beginning of his presidency that they will present an alternative to ‘Obamacare’, which will, among other things, ensure that people with pre-existing conditions will not be turned away from seeking health insurance. That has not happened to date.

Biden’s answer was more detailed. He dismissed the charge of being hostile to the private insurance industry, saying he wants to give Americans the choice between private or public health insurance. “He has done nothing about the care, nothing at all.”

In the second half of the debate, the number of personal attacks increased after attempts at electoral interference by other countries were discussed. Trump was strongly committed to a as yet unproven claim that Biden allowed himself to be paid by foreign governments through his son.

“I have not received a cent from a foreign source in my life,” Biden responded. He was referring to the recent disclosure of The New York Times that Trump has a bank account in China and insisted that the president make his tax returns public.

The president was unable to provide an effective response to repeated references from his opponent to more than 500 migrant children who were separated from their families and whose parents are now without a trace.

Stronger moments for Trump came during the discussion of a 1990s crime bill, of which then-Senator Biden was one of the most outspoken advocates at the time. The law led to mass detention for minor drug offenses. Minority groups were disproportionately hit. 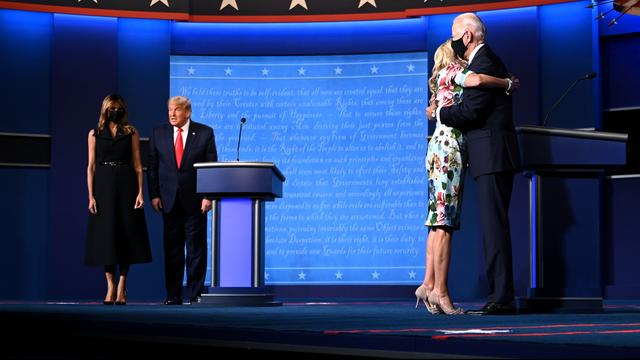 After the debate, the presidential candidates were greeted by their husbands. (Photo: ANP)

Trump is trying to appeal to moderate voters

President Trump was clearly doing his best to address hesitant voters outside the hard core of his constituency who broadly approve of his policies but are put off by his unpolished and confrontational approach. It’s a change of course that his Republican advisers have been pushing for in recent weeks. The president has been six months behind his rival in the polls.

A repeated attack on Biden that may prove effective on that front was his argument that the former vice president has had a long political career and spent eight years in the White House. According to him, Biden had enough time and space to achieve his goals, but did not succeed. “It’s all talk and no action with those politicians,” he sighed.

Biden, in turn, presented the election as a referendum on Trump’s presidency. The former vice president also had more opportunity to talk about his own policy plans than during the first debate.

Both Trump and Biden were guilty of exaggerations, misleading remarks and untruths. The president did this considerably more often than his rival.

It is very doubtful whether the candidates will be able to convince many voters with their latest debating appearance. There was no clear winner, and research shows that the influence of debates on the final outcome is limited.

In addition, there are less than two weeks to election day and tens of millions of Americans have already cast their votes.