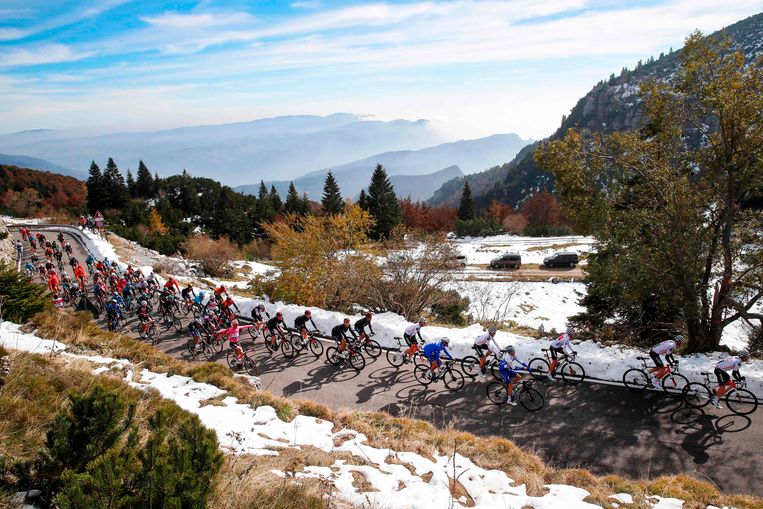 Shadow boxing, the group with classification riders rode up to Madonna di Campiglio. The place where Marco Pantani in the pink jersey won the stage in 1999 and was subsequently taken off course due to suspicious blood values. It would be the beginning of the end for the Italian who died in 2004, depressed, drug addicted and only 34 years old.

Wednesday’s stage lacked any drama. The classification riders watched each other, leaving little room for each other. Meanwhile, five minutes before she drove Ben O’Connor to the stage victory. The 24-year-old Australian took revenge for the stage of the day before. He was also in the early breakaway, but was beaten by Jan Tratnik in the nick of time.

It was not that it was quiet paddling in the group of favorites. On the contrary, Kelderman’s Sunweb team had set the pace and thinned out the peloton considerably. But all riders from the top ten were able to join. Almeida was easily in the wheel of Kelderman.

It was not steep enough for Sunday’s approach, when Hindley, Kelderman’s adjutant and number three in the rankings, managed to free almost everyone. The 12 kilometer climb had a maximum gradient of 8 percent and leveled off sharply towards the end. The Sunweb men were too easy to follow for the men behind them.

Hindley therefore took a different approach and attacked at 5 kilometers. He got a hole and Kelderman then jumped over. Hoping to release Almeida and get away with his teammate. “We tried to force something, but unfortunately that didn’t work,” Kelderman sighed.

Almeida managed to close the gap quite easily and then his helper Fabio Masnada took over command. Without further skirmishes, the group rode to the finish. Kelderman would no longer insist and crossed the line in 14th place at the same time as his rival.

It was once again proof that Almeida, despite his inexperience, making his grand tour debut, is not easy to crack. On Tuesday, the 22-year-old Portuguese – ‘the attack is sometimes the best defense’ – had gathered two seconds ahead of Kelderman in the final kilometer. He has a gap of 17 seconds and Kelderman has two serious chances to turn that gap into a lead.

The first option is Thursday’s stage, which already cast its shadow ahead of Wednesday’s race development. None of the classification riders really dared to go all out, knowing that they would get to digest the ride over the Stelvio the next day. “Every day is important and tomorrow is a great day, especially.”

It is not the last option, because the last mountain stage will follow on Saturday, to Sestriere. That ride will have a different route than indicated in the road book. The platoon would pass through France, but the corona reins have been tightened and groups larger than six are prohibited on public roads. The Giro peloton, still 136 men, is therefore not welcome.

Giro director Mauro Vegni has had to cancel three tough climbs (Colle dell’Agnello, Col d’Izoard and Montgenèvre) due to the French measures. That does not mean that it will be an easy ride on Saturday, because in the alternative route the riders have to go to Sestriere three times. Those climbs are less steep and high than the deleted cols, but follow each other faster. The drivers will hardly be able to catch their breath.

Kelderman therefore expects a tough battle on the modified course, which does not detract from that less altimeters. “Don’t forget we’ve been on a race for three weeks. We get up at seven every day and go to bed late. That will take its toll at the end. ‘