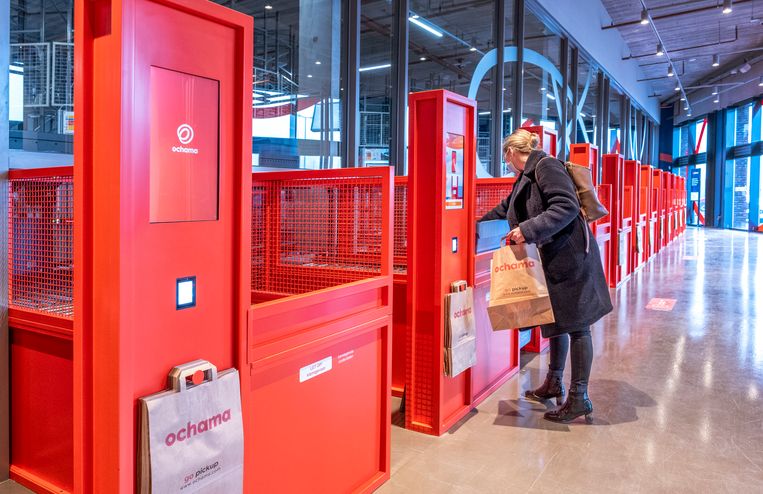 With a full Action bag in hand, a woman steps inside the large building on the Vierhavensstraat in Rotterdam. Toy cars, food processors, dog food bowls. Countless products stare at her from the showroom. But buying something and taking it with you is not an option.

The curious local resident is standing in one of the first pick-up shops of Ochama, which wants to conquer the European market as part of the Chinese JD.com. If you want to buy something, you have to order it via an app. The customer can choose: home delivery the next day or pick up your package at the store within three hours.

Most customers opt for the latter, if only for the technical highlights. Whoever enters the Rotterdam branch immediately sees three huge, round racks with packages. ‘People are regularly in shock when they first walk in’, says employee David Habraken. To obtain the packages, the customer has to scan a QR code at one of the red ‘pick-up counters’. Then the robot arms can get to work. A box is carefully placed on the conveyor from the rack. Not much later, the customer can happily put the mandarins in a bag on the other side of the glass wall.

Leiden and Rotterdam have the scoop. The first pick-up shops were opened there on Monday. In the near future, customers will also be able to collect their purchases the same day in Utrecht and Diemen.

Ochama is the first to bridge the gap between physical and online shopping, says special professor of e-marketing Cor Molenaar. ‘It is also the first time in the Netherlands that robots have been used in such a way.’ With the historically low unemployment figures in the Netherlands, the use of robots does not seem a bad idea. The company can also offer competitive prices due to low operating costs.

‘Robotization is certainly important’, says Dirk Mulder. ING’s retail sector economist sees increasing automation in the distribution centers of retailers and supermarkets. ‘As a result, productivity goes up and costs go down.’

Nevertheless, consumers in the store do want service and social contact, Mulder thinks. ‘China is a completely different market in that regard. They have come a long way in the field of omnichannel.’ Omnichannel is the new philosophy in retail, where no distinction is made anymore between online and offline stores. Together they form one chain.

In addition to the robots, there are also four employees in the Rotterdam branch today to welcome and help customers. ‘Many people immediately approach me with the QR code’, says employee David Habraken. ‘Then I show them how to pick up the package themselves at the pick-up counter.’

Besides the Coldplay music there is almost nothing to hear in the store. The customers are at work, Habraken and his colleagues think. They see that it is very busy, especially before and after office hours. “When the people are done with work, they drive by to pick up their groceries.” Ochama expects that especially millennials and young families, who like to decide for themselves when they receive their order, will see the benefit of the collection service. ‘We believe that this makes shopping easier, cheaper and more enjoyable.’

Unlike other (web) stores, Ochama has both food and non-food products in its range, so that the customer can find everything in one place. A one-stop shop, as Ochama calls it. Even if it is still questionable whether customers with an offer of ‘only’ seven thousand articles will really have enough with one store stop. ‘But we are working hard to expand our range,’ says marketing director Kayee Tjahjadi-Lam.

Cor Molenaar has no doubts that these expansions will come soon. ‘As part of internet giant JD.com, one of the largest e-commerce companies in China, Ochama can probably experiment endlessly in the Netherlands,’ says the e-marketing professor. And then extend the success to the rest of Europe.

The fact that the Netherlands is an important trade hub for Europe and the rest of the world certainly played a part in the decision to start here. The company is not concerned that Ochama has to compete with large, established names such as Amazon and Bol.com. “The idea is one of a kind.”

ING economist Mulder still has his doubts about this. “I wonder what the advantage is over competitors,” he says. ‘Is it an advantage to pick up a package yourself in a store? It can be handy that people don’t have to wait at home for their package, but the package safes already exist.’ The company will have to do more to distinguish itself, the economist thinks. “Perhaps it will soon be in the price or in the offer.”

If you want to pick up an order at the robot shop soon, you must first take out a (free) membership, in which a lot of personal data is shared. ‘Just imagine how much data JD.com can collect as a result’, says Molenaar. Still, the professor does not expect that the membership will deter many consumers. ‘We also have Netflix, don’t we? People do a lot for convenience.’

The woman with the full shopping bag is disappointed. She is not yet a member and cannot take anything from the colorful showroom. Employee David Habraken does. On Tuesday he ordered via the app. ‘A chocolate bar for my girlfriend, a hug for my child and a sweater for myself,’ he says. “You can’t find that anywhere else at the same time.”