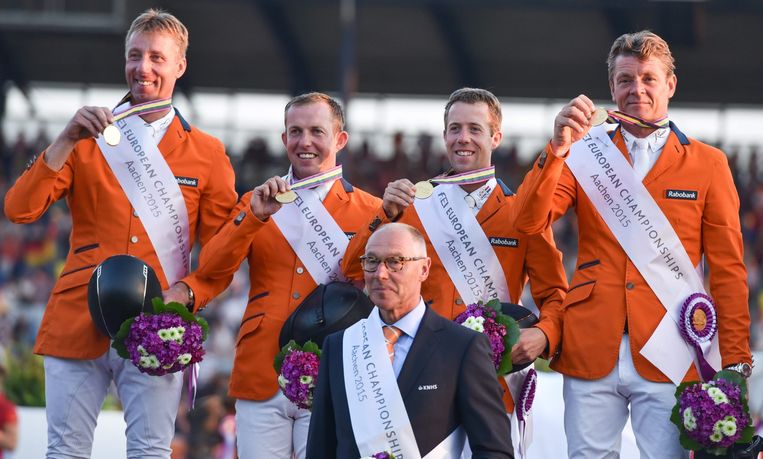 After sixteen working years as national coach of the Dutch show jumping riders, Rob Ehrens was surprised to hear last week that he had to leave the field. He is judged on the poor performance of the Dutch jumping team. No medal was won at the last two Summer Games and the World Equestrian Games.

A week after his job announcement, the 64-year-old jumping national coach is still displeased about the state of affairs. ‘I find it disrespectful, I have no other word for it. I have never received signals that riders or the union were dissatisfied with my work. I have not earned this after twenty years’, says Ehrens who, prior to his time with the seniors, was active for three years as the national coach of the juniors and young riders. ‘It hurts a lot. Well, I think it will take another year for that pain to wear off.’

Technical director Iris Boelhouwer of equestrian sports association KNHS acknowledges that the conversation with Ehrens does not deserve the beauty prize. “We are very sorry that it turned out this way. Afterwards I say: that could have been done differently and I blame myself for that,” said the technical director, who has only been employed by the KNHS for over a year.

Boelhouwer wants to emphasize that Ehrens has not been fired, but that it has been decided not to extend his expiring contract. ‘Sixteen years is an extremely long period for a national coach. The fizz is from the Coke, you might say.’ According to her, there is a sum of several factors.’

Lots of money, too few medals

In the first place, she mentions the lack of a team medal at the most important tournaments: the World Equestrian Games (in 2018) and the Olympic Games (2016 and 2020). NOCSNF invests a lot of money in equestrian sports: more than 5.7 million between 2016 (Rio) and 2021 (Tokyo). In the past, the sport was a guarantee for medals.

‘That is the most important thing in our sport, that is what sports umbrella organization NOC*NSF also expects from us. We haven’t won a medal in a global country competition since 2014’, says Boelhouwer. ‘Furthermore, the chemistry between a few riders and the national coach was less on a sporting level.’

Ehrens was criticized for not always being well informed about the shape of the horses and for not showing his face enough at international competitions.

Show jumper Maikel van der Vleuten (33) reacted with surprise to Ehrens’ departure last week. “I didn’t see this decision coming. In any case, I was not consulted about it’, says Van der Vleuten from Prague where he participated in the Global Champions Tour in recent days. ‘If things were going on with other riders, they should have started the conversation with Rob. As far as I was concerned, there was sufficient basis to continue. I have achieved all the great successes for the Netherlands together with Rob and I have always enjoyed working with him,” says the bronze medalist (individual competition) of the Olympic Games in Tokyo.

Ehrens says he can look back on a wonderful time. ‘I am very grateful that I was allowed to work for the KNHS.’ The years 2006 and 2014 stand out as far as he is concerned. ‘2006 was a very good year with team gold at the World Equestrian Games in Aachen. And 2014 was absolutely amazing with two world titles’. He is referring to the Dutch team gold and the individual World Cup title of Jeroen Dubbeldam in Caen.

In addition, Ehrens’ team won silver in the 2012 Nations Cup at the Olympic Games in London. His last achievement was this autumn: the surprising victory of the Dutch team in the Nations Cup Final in Barcelona. Without knowing it, Harrie Smolders, Maikel van der Vleuten, Willem Greve and Sanne Thijssen gave the national coach a memorable farewell.

Now it’s up to KNHS to find a new national coach. Boelhouwer points out that show jumping has changed enormously in recent years. ‘The number of five-star competitions (highest level, red.) has grown exceptionally, which means that riders have to weigh up sporting and commercial interests more and more. What does this mean for the commitment of their top horses for the Nations Cup? Do you want to defend the country’s honor or do you opt for a lucrative show jumping competition? As a result, the role of the national coach will also change in the future, management will become increasingly important.’

Boelhouwer hopes to be able to present a new coach as soon as possible. The union doesn’t want to waste time. Boelhouwer: ‘Next summer the World Equestrian Games are waiting in Denmark and that is the first qualifying moment for the Olympic Games of 2024.’ This week, representatives of the KNHS will speak with riders about the core qualities that the new national coach must meet, after which a profile is drawn up.