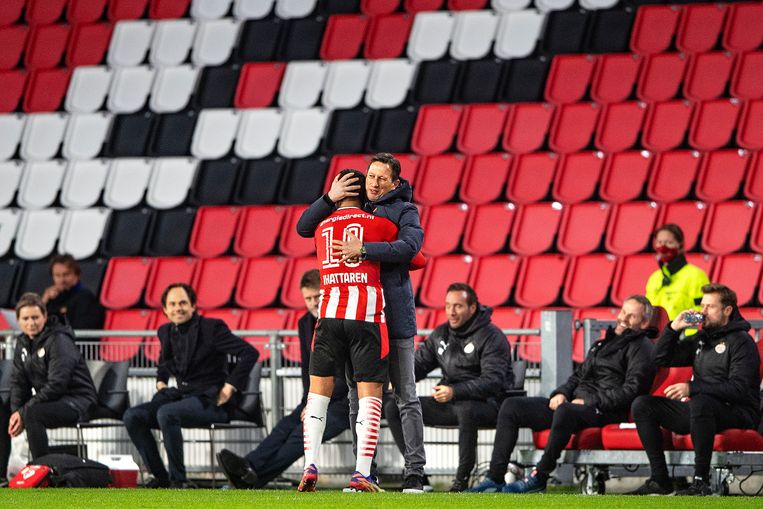 Roger Schmidt is the man of the pressing all over the field. But on the view of the German coach PSV is alone for the time being. Or will the turnaround follow in the top match against Ajax by Sunday?

The PSV trainer is certainly much discussed. After all: Roger Schmidt came from Germany as the new light that would shine on Dutch football. In reality, he seems to be wandering in a world alien to him. He changes inimitable, according to himself to keep players fit. But what then, if they will soon be eliminated everywhere? Fit on vacation?

Or he does not change, like Thursday in the European match against Olympiacos. PSV conceded a fatal goal when some players were exhausted and not one substitute had been used.

Schmidt whines about referees. And above all: he hardly plays the system with which he achieved fame, the way of playing scorching pressing that makes opponents gasp for breath. The intended sorcerer’s apprentice Roger Schmidt looks like an average trainer, which begs the question: did PSV have to go to Germany for that?

Only: Schmidt has only just started, transforming a club and its culture. Ricardo Moniz, his predecessor ten years ago as a trainer at Red Bull Salzburg, the club where Schmidt broke through: “We knew exactly what we were getting.”

Moniz describes the manufacturer’s sporty football vision in energy drinks as follows: ‘The Red Bull school is football from the underdog role. From there attack the top. Schmidt is the greatest talent in that school. He only needs players with ninety minutes of sprint capacity, players with overcompensation. Du musst marschieren, as Germans say. PSV has too little of those players. To do that, he must first continue to select. ‘ That process is far from complete.

Moniz is the Cruijffian, a follower of the former technique trainer Wiel Coerver. As a trainer (he is now without a club) he demands unconditional commitment, inspiration and passion. He is one of the few in modern football to constantly demand full control of the ball in every situation. He sees how difficult it is for footballers from the Netherlands to survive in the physical run-your-rot football that is spreading across Europe. Even if they are from the class Ziyech, Van de Beek and then Klaassen, used to position play and cool ball handling.

That’s why he says about Schmidt: ‘You have to give him time. The glass is half full, not half empty. ‘ Moniz stepped down after the double at Salzburg in 2012 (championship and cup) due to a conflict, partly due to the new course. Red Bull came up with a somewhat cynical approach to football that suited the time: efficiency. That eternal running and the aggressive approach scare off opponents with few weapons. That game starts with the attackers. They take the lead in putting pressure. PSV’s acclaimed attackers, if they are fit, fall short in that area, with Mohammed Ihattaren as the clearest example. The conversion is a difficult and time consuming process.

Nobody has to blame PSV for a possible second place in the premier league. Ajax, opponent in Eindhoven on Sunday, has more money and better players. Second would be nice. Only: playing pressing with players who cannot or cannot do that very well is impossible, with a team also without very good defenders and with a lot of ball loss. That is why Ihattaren participates much less than the fans of pure technology want.

See Donyell Malen after last Sunday’s game with Vitesse. The top scorer of the club came in after the break, when PSV is 1-0 behind. Malen scores and is decisive. He is careful in his comments. Schmidt is the trainer, he will know. The trainer concludes that his top players are not fit enough. On Thursday he will receive confirmation for this.

With that football from the road to tomorrow, with a diffuse image about today, comes Schmidt’s behavior. He grumbles at referees. He scoffs that he will never have to see arbitrator Nijhuis again. His misconduct is not news either.

The German writer Dietrich Schulze-Marmeling went to see Preussen Münster, where his son played, with the young Schmidt as trainer. He knew Schmidt superficially, as an intelligent citizen trained as an engineer. ‘He went to a linesman at me, not normal. I was completely upset. ‘ Later he heard from his son that such outbursts were frequent, that Schmidt then lost control of himself. He was even sent away from Leverkusen once, after which he refused to leave. The game was halted for ten minutes and Schmidt was suspended for three games. No, the Germans think he is quite calm in the Netherlands.

Those outbursts diminish his reputation as an innovative trainer. ESPN analyst Kenneth Perez, for example, is eagerly awaiting that special game. He has not seen that much yet. Schmidt is now a bad loser. That can be blood irritating. He looks for excuses, while his director Toon Gerbrands always says that excuses do not exist in top sport. But I must also say: he does not drift. He is very confident in himself and follows his own line. He has shit about everything. I like that. ‘

PSV handed the coach the keys to the club to spread his philosophy. Schmidt brought his own staff and recruited a trio of players in phase 1 of the selection. He only runs the risk of having played for the prizes before the start of March, without leaving a clear mark on the game. Salzburg’s match with Schmidt against Ajax in 2014 was the blueprint for what PSV wants to achieve. Frank de Boer, coach of Ajax at the time, had never seen anything like it. Played completely silly. Schulze-Marmeling says that he was in a TV studio with Schmidt a few months before that match. ‘I spoke with one of his brothers in the wings. He predicted that they were going to play Ajax upside down and how they were going to do that. ‘

But Schmidt has also changed his view of the game. He learned that chasing opponents everywhere is sometimes impossible, especially in China, where he worked for Beijing Guoan. In China, clubs pay millions for foreigners, mostly attackers. The lesser players are the Chinese, and they are in the back. Pressing early can be fatal, because then the good foreign attackers will overplay the bad Chinese defenders too easily. Adjustment is required.

PSV is like a Chinese team in a way. The best are in the front, the less are defenders. This requires a different approach. Schmidt must continue to select in order to crawl closer to his ideal image.

She is not so interested in possession, in the philosophy of Red Bull. The aim is to conquer the ball in the build-up of the opponent, when the team in possession of the ball is still vulnerable, and then make a shot for a field goal. Success at Liverpool starts with the labor up front. Mane, Firmino and Salah hold five or six opponents in check. At Salzburg, Schmidt had Mané, Kampl, Soriano and Alan, who together were better than the current PSV players.

The static, possession-based game that has crept into Dutch culture in recent decades does not suit Schmidt. To fix that, there are three options: 1. Admit that the project has failed. Then everything would have been a waste of time and money. 2: Replace players. Or 3: allowing existing players to participate in the new philosophy and supplement it with others. The latter takes time.

Ihattaren, for example, great at the ball, is actually unsuitable for Schmidt’s approach. Maybe he can still connect. That will cost him willpower. Attracting Götze was a godsend. No more. Even Malen is not yet able to do what the trainer asks. That is why he sometimes sits on the sofa.

Nevertheless, Moniz says: “Schmidt brings about something, but his team is not taxable. If PSV had the overcapacity of Salzburg at the time, Ajax would not cross the center line now, even though Ajax is stronger now than then. The only question you really have to ask is this: why doesn’t PSV have that overcapacity? Why is there always a turning point after fifty, sixty minutes? This can only be due to static training over the years in the Netherlands, due to the lack of load capacity. Schmidt ultimately wants to merge two philosophies, and thus take our football further. Accept him. He’d rather die with his own ideas. ‘

Topper as a prelude to a full month


Matches follow each other at such a fast pace that life from duel to duel is the maxim of Ajax. ‘No idea what they are going to do’, Davy Klaassen said on Thursday after the victory over Lille about the next game, the top match against PSV (Sunday 2.30 pm in Eindhoven). “We’ll see that on Sunday.”

Ajax did not lose a match in the busy month of January and can also remain unbeaten in February, with the top match in Eindhoven as the final piece of the month. Ajax has six points more than PSV, played a match less and a much better goal difference. Should Ajax win, the championship is close and Ajax can look ahead with confidence to March, with another decisive duels. The semifinal of the KNVB Cup is on Wednesday 3 March, at Heerenveen. Friday’s draw showed that Ajax will play in the eighth finals of the Europa League in the eighth finals of the Europa League against Young Boys from Bern, where former Ajax player Miralem Sulejmani plays football on 11 (home) and 18 March (away). Young Boys settled with the club of one of Ajax’s previous trainers, Peter Bosz’s Bayer Leverkusen. Klaassen did not really care who he drew against, he said on Thursday.