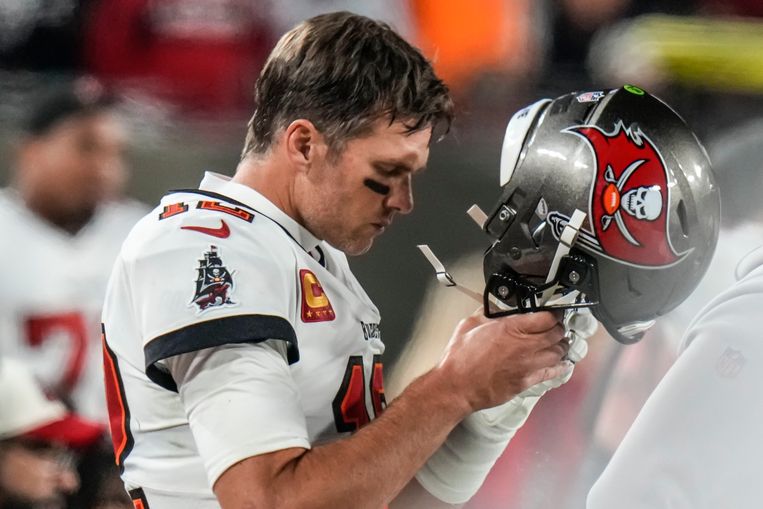 Will he stop or continue? Tom Brady’s elimination from the American football season playoffs sparked endless speculation last week, but fewer answers. The now 45-year-old record winner, one of the most famous American athletes, is not sure whether he will stick to it for another year.

Finally, after a whopping 23 seasons in NFL football league, big but old Brady seemed to have passed his sell-by date a week ago. If the first-round playoff game against the Dallas Cowboys was his last, then the end of his unparalleled career is inglorious and painful.

Tampa Bay Buccaneers quarterback Brady, so often a masterful, unflappable playmaker, played one of the worst games of his career against Dallas. Nearly half of his passes missed their target. With each waver, the look under the helmet grew more despondent. The California man looked insecure, sometimes frightened and out of his element. For those who had seen him at work over the past two decades, it took some getting used to.

Yet nobody dared to write him off this season, even though he had reached an age where the average player has been retired for about fifteen years. Even with a seemingly unbridgeable deficit in the fourth quarter against Dallas, the American commentators were wary, because yes, you never know with Brady. It marked the awe that still inspires the American.

Should he retire, his disappointing performance against Dallas will be just a footnote in a unique epic. Brady will be remembered for his seven championships, six with the New England Patriots and one, two seasons ago, in Tampa Bay. No quarterback won more.

Brady ruled the NFL for over twenty years. He was in the Super Bowl ten times, the final. His dominance made him loved, but hated just as much. Great was the gloating after the elimination against Dallas.

Polished as ever, Brady hid his frustration at the press conference that followed, as the multi-winner usually shows grace even when he loses. At least, for the stage. Press, public and club were thanked. “I’m going home and hope to get a good night’s sleep,” he answered questions about his near future. “My focus was on this match. I’m going to take it day by day now.’

Brady’s possibly final season has been a turbulent one, on and off the field. For the first time in his career, he lost more games than he won. The fact that Tampa Bay made the playoffs was due to the weak division in which the club plays. It was still won. Brady himself had his ups and downs, but he was no longer one of the best quarterbacks in the league.

Worry about the blows

In addition, after thirteen years, his marriage to Brazilian supermodel Gisele Bündchen came to an end. She urged him to retire in recent years, worried about the blows her husband received during his career. But Brady continued, even after announcing his retirement a year ago. He wanted to spend more time with his family, it was said at the time, but a few weeks later he changed his mind and returned to Tampa Bay. It wouldn’t have done his marriage any good.

What now? His time with the drifting Buccaneers seems to be over anyway. “If Tom plays next year, it won’t be in Tampa Bay,” said Julian Edelman, his former New England Patriots teammate.

If he continues, the Miami Dolphins, New York Jets, Tennessee Titans and especially Las Vegas Raiders would be the main candidates to recruit him, but the question is what a 46-year-old Brady can still mean next season. “I don’t think he can win any more games for a team,” said ESPN analyst Marcus Spears. Others see added value in his experience, his understanding of the game. Give him worthy offensive weapons, it is thought, and Brady will bring them into action.

His position, that of quarterback, became increasingly protected throughout his career. Brady is still regularly knocked down, but the hard tackles of yesteryear are prohibited. For defenders it is more difficult to make life miserable for the prima donnas, the playmakers. It significantly extended Brady’s career, in a sometimes brutal league where the average career lasts about three seasons.

If he chooses to stop, his salary will increase. Last year, Brady signed a ten-season contract as a television commentator with Fox. Over that period, he will reportedly receive $375 million, earning more than most of his former colleagues.