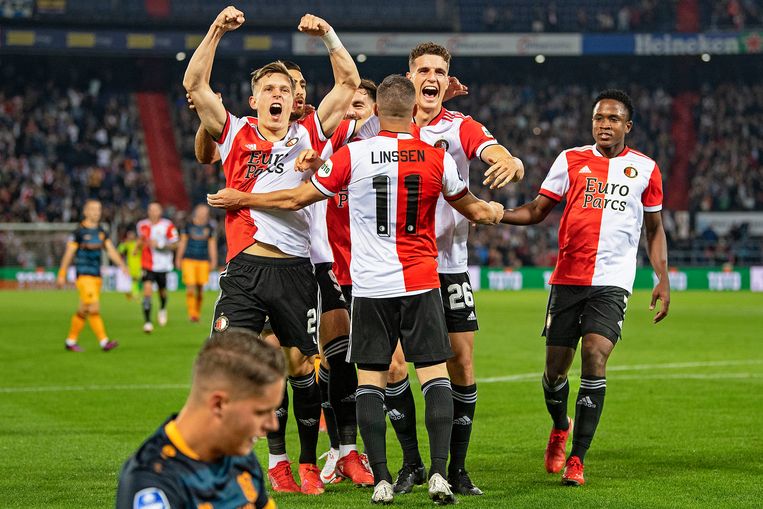 In front of: Feyenoord has, according to coach Arne Slot, after the departure of captain, top scorer and international Steven Berghuis in the summer, ‘perhaps the narrowest selection in club history’ in terms of experience. It sounded unenviable, but it also offers advantages. The smaller the group, the fewer disappointed players walking around, the sharper the training sessions generally. Slot left useful reserves at previous club AZ for that reason.

Moreover, there is no longer a star that everything revolves around, and who now and then couldn’t control his frustration, as was the case with Berghuis. Feyenoord looks more together, more of a team, not just on the field. Players often text and call each other in the morning, go out to dinner, play cards and fool around, especially the trio Linssen, Til and Toornstra constantly ridicule each other. Heavy training sessions feel lighter in such an atmosphere, players do not lower each other during matches.

There is no language barrier, because all newcomers speak Dutch or English and adapted quickly. Where Feyenoord made a mistake last season with the rent of the scoreless Argentine striker Pratto, technical director Arnesen has taken revenge this season. Defender Trauner, midfielder Aursnes, back Pedersen and supersub Dessers have performed excellently so far. Only the most reputed newcomer by name, Jahanbakhsh, is still disappointing. Another winger, Reiss, has yet to fully develop.

But the skeleton stands with Toornstra, Til and Linssen as pacesetters. Bijlow also manifests himself as a pioneer, especially since he has been the first goalkeeper of the Orange squad.

In return for: Slot established his name at AZ in the 2019-2020 season with a shared first place and excellent performances in Europe. The fact that his team remained largely injury-free was an important pillar of that success, he always said. That is now also the crux. Where Ajax and PSV have wide selections, Feyenoord shouldn’t actually let two basic players disappear for a long time at the same time, and certainly not in midfield or in the back.

Feyenoord has already digested a very busy period well this season and many players can relax during the international match. But a full absence list can also arise due to other causes (contact injuries, corona, suspensions). The financial resources to absorb this in the interim are lacking at Feyenoord.

In front of: It stormed this season in the Kuip, in terms of game, in terms of sound. Fans were happy that they could return to their beloved stadium after the ‘corona season’, and did not find a waiting team there, but a fresh, energetic formation that took pride in creating three great opportunities within fifteen minutes. That made the tongues in the primordial stadium with its mighty acoustics. The Feyenoord fans were always clearly audible at away matches. And look: the first European winter since 2015 is up for grabs and in the competition it took the most points since championship year 2016-2017.

In return for: Fans are no longer allowed in due to corona measures and insiders suspect that this will certainly last until the winter break. According to Slot, without supporters ‘a whole new competition’ will start. Against the last PEC was an easy win. Linssen: ‘But that will be the first time without an audience, and we scored quickly. If it’s difficult, you’ll miss the audience.’

In front of: Slot comes across as much calmer and more thoughtful in the media than his no-nonsense predecessor Dick Advocaat, but still enforces that even the previously not always fit-looking playmaker Kökcü is constantly chasing after losing the ball to win it back.

That attitude (and ability) is needed to play the football that Slot advocates and that is more or less implemented throughout the club. Keywords: high intensity, creativity, dynamics, variation, initiative, connecting and reconnecting. Slot’s game principles are crystal clear, but he can also prepare his team in such a way that it successfully plays on the weak spots of the opponent. Leading to an awe-inspiring statistic: Slot won all six top matches he coached and didn’t concede a goal.

In return for: How does Feyenoord deal with a serious dip? How does the ambitious Slot, who had never worked for a club of the caliber of Feyenoord before, react? There was little going on when AZ got off to a bad start under his leadership last season. At Feyenoord it is different. Especially now that it has been spoken out loud that there is a title candidate in this selection.