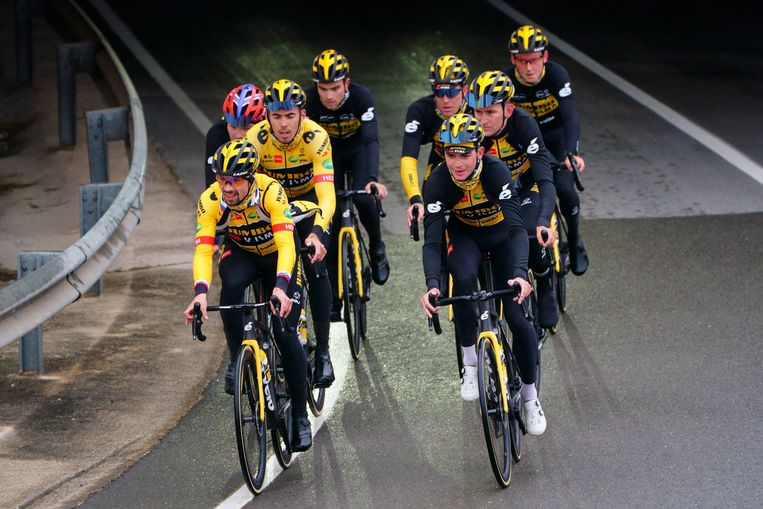 Jumbo-Visma had, as usual, settled down in Alicante for the first training camp of the new season, where the weather is always nice. But on the first, and later only, training day, the riders in winter outfit sprint up the hill in drizzly weather on a desolate, wet road next to the A7 towards Madrid.

David Dekker’s gaze is grim for a few seconds when he competes with Timo Roosen. Roosen, recognizable by his national champion jersey, loses, but calls out after Dekker: ‘Hey, that doesn’t count.’ Dekker, the specialist who has to absorb the departure of sprinter Dylan Groenewegen, made a false start, according to Roosen. When Dekker looks back, Roosen draws an imaginary rectangle with both index fingers; the VAR gesture. Laughing, Dekker wins the jump-off and all sprints after that.

This is how it should have gone for the Jumbo-Visma riders for almost two weeks: every morning from the rented hotel-with-swimming pool, they found their own bicycle next to the team bus and set out with the group all day long. Instead, “the doomsday scenario has come true,” says Mathieu Heijboer, performance manager of the team: after one day in which the press was allowed to be present, the training camp was ended on Tuesday due to a corona infection among the riders. ‘It turns out to be extremely difficult to organize these kinds of activities in these times’, says sporting director Merijn Zeeman.

To each their own

The riders now go their separate ways to individually imitate what they would have liked to do together at the training camp. Roughly speaking, Wout van Aert explained at Monday’s team presentation, this involves alternating between ‘expensive and intensive’. The Belgian, together with the Slovenian Primoz Roglic, is the pivot of Jumbo-Visma. ‘Expensive’ is a matter of spending hours on the bike and building a basic fitness level. ‘Intensive’ are many ten-count power explosions in a row, or during a long drive a minute of ‘full speed’ driving up every half hour.

‘I just had an intensive block,’ said Van Aert. He was referring to his short, successful motocross campaign; he won nine of the ten cyclocross races he competed in. Van Aert, before the training camp was broken up: ‘The other guys here will start training more intensively, I will work on improving my endurance and will spend more hours on the bike than they do.’

With or without training camp, season preparation is a matter of increasingly fine tuning to be in shape at the right time. Last season, he was too early, said Van Aert, as a result of which he just fell short mentally and physically in the most important and oldest matches, the so-called monuments. His goal next season is to win at least one such monument. From mid-March, that will be Milan-Sanremo, which he already won in 2020, the Tour of Flanders or Paris-Roubaix. “I have to be at the top level later in the season for that.”

Jumbo-Visma has now embraced Van Aert’s ‘monument goal’, where, according to the rider, the team preparation for the spring classics was of a lower level last year than for the Tour de France. That started extremely bad for Jumbo-Visma, but ended in the most successful ever for the halved team. “I discussed that difference and something was done about it right away,” said Van Aert. ‘The classic core around Wout has been strengthened’, confirmed sports director Zeeman. ‘With nutrition, training and better classic riders around us, we will get Wout better for the last one and a half kilometres.’

But Van Aert has another goal next season. One that can give the team headaches, because it is difficult to combine with the reason for existence of the Jumbo-Visma rider who always trains with number 1 on his shirt: Primoz Roglic. Van Aert is aiming for the green jersey in the Tour, Roglic for the yellow one.

Six riders have already been designated for the Jumbo-Visma Tour team and that selection is purely composed for the final victory. Not from the points – but the general classification. Two riders can still join, including candidate Mike Teunissen, who single-handedly helped Van Aert to the most beautiful sprint victory of the year: the final stage of the Tour in Paris.

Van Aert also won a time trial and a mountain stage in the Tour, but these only yielded 20 points for the green points jersey against 50 for a sprint like on the Champs-Élysées. ‘I can’t keep Primoz out of the wind in a flat sprint stage,’ announced Van Aert, ‘but in the mountains he can count on me.’ What Roglic thinks of his teammate’s green plans remained shrouded in mystery. The Slovenian said he is happy if he can finish the Tour this time. In the 2021 he passed out with scrapes and plasters all over his body.

Roglic and most of the riders did not get on their bicycles waiting in front of the hotel entrance in Alicante on Tuesday, but in a car to go home. ‘As a precaution’, said their teammate Steven Kruijswijk. ‘I can train just fine at home too.’ Because wherever the Jumbo-Visma riders are, their trainers know everything about them. They read data from patches to measure sugar levels to cycling computers that tell you how much more or less power a rider puts on the pedals in the first and last intense minute of a workout. The training camp may have ended after a day, but that data continues to flow in on the Jumbo-Visma laptops.