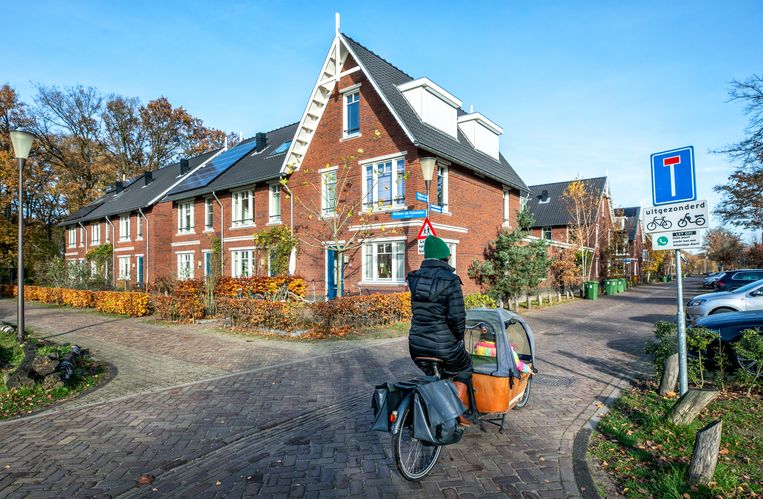 In the Brabant municipality of Vught, houses must end up with the people for whom they are intended. ‘You don’t want someone else to run off with the proceeds of municipal policy for affordable housing.’

A lottery ticket, that’s what a buyer of a new-build home in the Vught Stadhouderspark project called it on the website of developer BPD. It turned out to be a winning ticket. Not only could he have bought a house in this popular Brabant municipality, which was also located on the edge of the Vughtse Heide and ten minutes by bike from the center of Den Bosch. Subsequently, the houses on the former military site also increased in value at lightning speed.

A number of houses on Willem de Rijkelaan had been built on the condition of the municipality in the ‘affordable new construction’ category. Houses bought in 2014 for 220 thousand euros were sold last year for around 400 thousand euros. That amount has now risen to more than 5 tons.

Those high prices are logical in themselves, thinks Bregje Peijnenburg-Van Gemert, councilor for Municipal Interests. ‘It’s also a fantastic location there, in the woods and so close to town. These people have made a flying start in their housing career. I grant everyone their equity, but as a result, such a house disappears from view of the target group of the municipality, people who are looking for an affordable owner-occupied home.’

It had already become clear about two or three years after the completion that the buyers from the very first hour had indeed won the lottery. Some of the entry-level homes have already been sold for a substantial profit. ‘That made us think at the time’, says then alderman for Housing Peter Pennings, also from Municipal Interests. ‘How do houses end up with the people they are intended for? And how can we ensure that this remains the case after resale? You don’t want someone else to run off with the proceeds of municipal policy for affordable housing.’

Vught subsequently introduced a self-occupancy obligation with an anti-speculation clause for new-build homes up to 400 thousand euros. Those houses could therefore only be sold to people who would also live there themselves. Anyone who sold the house within five years could face a fine.

Vught thus joined the growing number of municipalities that have introduced compulsory self-occupancy. More than 130 municipalities have now taken such measures, according to research by de Volkskrant. With a self-occupancy obligation for new-build houses and purchase protection for existing, older homes, municipalities are putting a stop to speculators and pawnbrokers.

Three weeks ago, Vught tightened the measure again, under pressure from rising house prices. ‘In the old measure, we still regarded the price category of new-build homes up to 4 tons as medium-priced’, says Fons Potters, the D66 alderman for Housing in Vught. ‘But this is such a popular residential community that for an ordinary house, 4 tons are quickly paid. So we’ve added a new category to the scheme. We now consider homes worth between 400 thousand and 600 thousand euros as the ‘medium-high’ category. Purchase conditions will therefore also apply to the more expensive new-build from now on.’

You can never completely control the turbulent housing market with these kinds of schemes, alderman Pottersr admits. Under the Vught scheme, the buyer of such a ‘protected’ home can sell it again after five years, without penalty or price restriction. This makes Vught one of the middle groups among the municipalities. Three and five years are according to the Volkskrant-examine the most popular periods. A handful of congregations use a ten-year period, and a few even use an indefinite period. ‘We didn’t want to make the period too long,’ says Pottersr. ‘You don’t want to confront people who want to move, for example because they are having children, with a sales fine eight or ten years after they have bought their home. You shouldn’t lock up the housing market.’

A self-occupancy obligation and all those other options for intervening in the housing market are therefore not the ultimate solution, says Potters. ‘For example, you will also have to think carefully about what you are building. Do not put down houses of 3 tons that are actually worth 4 tons. We are now looking into building smaller homes. This way, a house at the lower end of the market can remain somewhat affordable.’

For the time being, the alderman is satisfied that his municipality can also tighten the reins, especially now that a lot of construction activity is in the pipeline in Vught. ‘A car is immediately worth a quarter less when it leaves the showroom. Nowadays, a new home is immediately worth a quarter more when it is completed. That remains a strange phenomenon. I wish everyone the best, but you don’t work on affordable owner-occupied homes to fill the happy first buyers.’