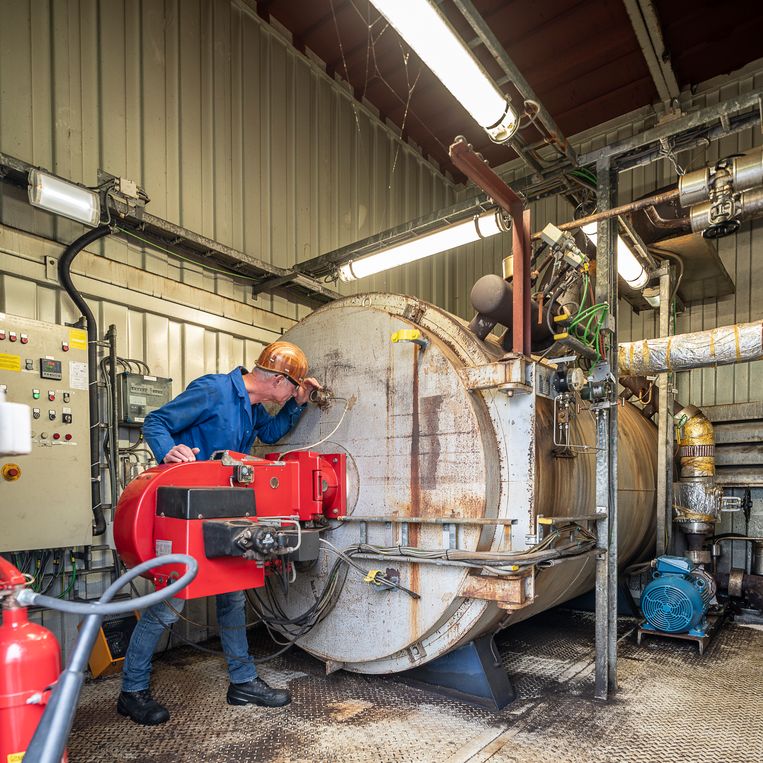 Behind the low factory buildings of salt producer Nedmag, close to the Veendam golf course, director Bert Jan Bruning walks to a blue steel structure made of sea containers and opens the door. Behind it is an ordinary kettle, one and a half men high, which is used for one of the drying processes of magnesium salt.

Bruning points to the device that sits at the end of the boiler: the shape of a leaf blower, the color of a fire engine, and the size of the back seat of a small car. That’s the burner. This only works on natural gas, and we will replace it in January. The new one can run on both hydrogen and natural gas. ‘

It may seem like a minor intervention, but for Nedmag it is the start of a major development. The company has been extracting magnesium salt from under the soil of Veendam since 1981. The raw material is used in food supplements for both humans and animals, but heat-resistant bricks are also baked from it. Nedmag needs 50 million cubic meters of natural gas every year to dry the salt and especially to bake the bricks and to switch to green hydrogen. That process should be completed by 2035, Bruning believes.

Everything said about the future of the hydrogen economy is gigantic. Recently, producer Yara, on the other side of the country, in Sluiskil in Zeeland, announced that a small part of the production of fertilizers will be switched to green hydrogen. It will be made with wind power. If the entire factory were to choose that path, by 2030 Yara alone would need one-third of all wind power generated in the North Sea to meet its hydrogen needs. Similar colossal plans come from Shell and Tata Steel.

When reflecting on reducing greenhouse gas emissions, it often concerns wind turbines, solar panels, heat pumps and electric cars. Small beer when you consider that the largest greenhouse gas emissions come from industry: one third of the total. And where transport and electricity production are already busy with decarbonisation, industry is not getting anywhere. In two years (2018 and 2019), emissions in the electricity sector decreased by 13 percent. In the industry by 1.5 percent.

So with its hydrogen burner, Nedmag can be called a pioneer. For the time being it is only a small project. The hydrogen comes by truck from the nearby electrolyser of Gasunie subsidiary EnergyStock at Zuidwending. But if Nedmag were to switch its current production completely to green hydrogen, almost a quarter of a wind farm in the North Sea would be needed for this alone.

Bruning does not yet know how all this should take shape, but he does not see many alternatives. Nedmag’s refractory bricks are fired at 2,200 degrees. That is not possible with heat pumps or geothermal energy, and not even with electric ovens. That only works with real fire. If Bruning wants to do that production process without fossil fuels, then he has only two options: biogas and green hydrogen. ‘There is some biogas available in this region, but not nearly enough for the entire production. So we opted for hydrogen. ‘

That will cost the company a lot of money. Nedmag needs emission rights to burn natural gas. Thanks to the generous policy of Europe, the company still has enough free emission rights on the shelf until 2027, but after that Nedmag will have to buy them.

But even then, Bruning thinks, the bill for hydrogen will still be two to three times that for natural gas.

But why is he doing it then?

‘In the Climate Agreement we have been ordered to reduce emissions by 50 percent by 2030. By using biogas, we could possibly achieve a 30 percent reduction, that’s all. So we will have to. We want to switch completely to hydrogen by 2035. That is faster than the government asks of us. But if you choose too long a term, nothing will happen. ‘

He has another reason. With that energy transition just around the corner, he can already see the storm coming. ‘We are looking for products that require less energy and that deliver higher added value. We already supply magnesium salts for the compound feed industry and for the food industry, and we want to expand that considerably. ‘ In this market, Bruning thinks, it is becoming increasingly important that you can demonstrate that your product is climate-friendly. The production of the heat-resistant stones will decrease, he expects.

The burner replacement in January is the first step. It only concerns a few percent of the energy that Nedmag uses. ‘We need to gain experience. If we don’t walk, there will be no path. Hydrogen is at the beginning of its life cycle, and it may take up to thirty years to get fully operational.

Nedmag does not operate alone. It has formed a consortium with seven other companies in the region, including Avebe and Smurfitt Kappa, to kick-start the hydrogen economy. ‘If there is enough demand for hydrogen, energy companies are more likely to also invest in it.’

With all the news about the ever-increasing plans for the application of green hydrogen, you would think that the greening of the industry will go really fast now, but it does not seem like it for the time being. Nedmag’s drive for action is still exceptional.

Green electricity is far too expensive for industry


In electricity generation, greening got off the ground when a good system was introduced to distribute subsidies: the SDE scheme, and its successor, the SDE +. In a few years time, the amount of wind and solar power grew, and its costs decreased at the same rate.

On Tuesday, the industry can also apply for a subsidy for greening. The subsidy scheme has now been given another plus: SDE ++. But the highly necessary electrification of the industry will not go any further for the time being, says Alex Kaat. And the production of green hydrogen (with sustainable electricity) hardly ever. Kaat is an energy expert and often acts for the sustainable electricity sector. The problem for the industry, he says, is that gas is so much cheaper than electricity. ‘For the same amount of energy you are three times as expensive if you opt for electricity than for natural gas.’

Many production processes can be technically electrified, even with green electricity, but that means that those processes will become much more expensive. As long as greenhouse gas emissions do not become much more expensive, subsidies are therefore indispensable. The introduction of the SDE ++ scheme should help the industry with a much-needed flow of subsidies, but it does not look like it now.


The problem facing the cabinet, Kaat explains, is that the electricity that now comes from the (industrial) socket is for the most part (76 percent) generated with fossil fuel. The European Commission therefore assumes that switching to electricity will hardly result in a reduction in CO2 emissions. Moreover, the European Commission argues: if there is additional demand for electricity, wind turbines cannot suddenly turn faster, and solar panels cannot run for hours. No, then the gas plants will run faster. And so, still according to Europe, the electrification of the industry does not immediately generate less greenhouse gas, and should therefore not simply be stimulated with subsidies.

And so there are major limitations in the SDE ++ scheme, which means that a company that wants to electrify can only receive a subsidy for a small part of its electricity consumption. In fact, virtually nothing for the coming years. This also applies to projects that run on green hydrogen, because even to make hydrogen, electricity almost always comes from the power grid.

According to Kaat, there is a solution to this problem. You should, he says, match a company’s power consumption as closely as possible to the production of sustainable power. A company can purchase electricity from a solar or wind farm. By no means always supply that power. However, the user should then be able to apply for a subsidy for the electricity that the company uses when the electricity producer actually delivers. ‘In this way you can demonstrate that gas is actually being replaced by green electricity,’ says Kaat. ‘It is technically feasible, but the Ministry of Economic Affairs and Climate still thinks it is too complicated, too different.’

And so the greening of the industry will remain in low gear for the time being.