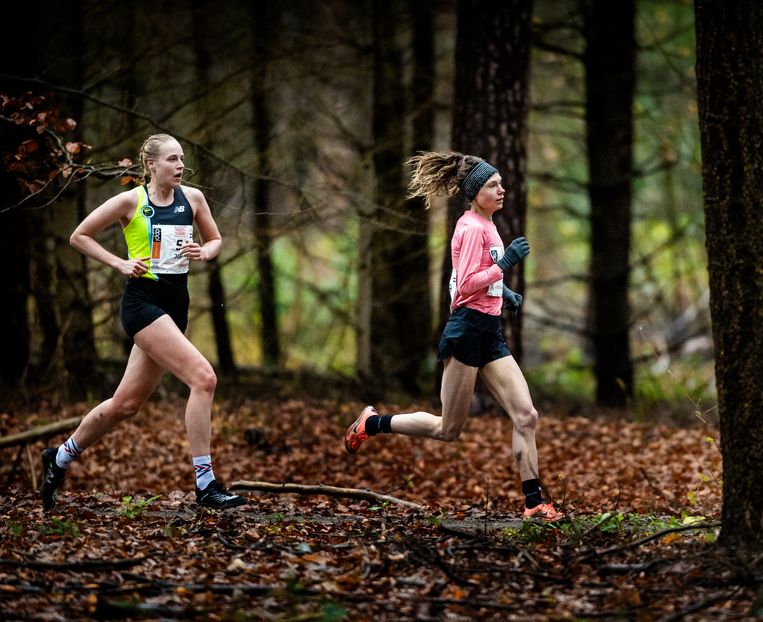 It feels as if a herd of horses is running past, the ground in the Tilburg city forest vibrates so violently during the Warandeloop when the athletes pass by. The ground is harder than the participants had previously thought.

On Saturday it was still one big muddy mess, a day later, according to marathon runner Frank Futselaar, the race is like a ‘glorified road race’. ‘There is a lot of sand in the subsoil here. The water therefore drains quickly, so the course is quite dry and hard’, he says after the finish in the ten kilometer race, in which he finishes 13th after 30 minutes and 50 seconds.

Mike Foppen, who becomes Dutch champion in 29.56 and finishes narrowly second in the international field, behind the Swiss Jonas Raess, does not agree at all. ‘Did you see Frank walking? He really has such a light shuffle pass. He doesn’t feel the mud at all. If I put my foot out too far, I slide in all directions. With my long legs, my body is much less suitable for the cross.’

Battle against the elements

Now that the track and marathon season is over, the top Dutch runners are throwing themselves into the battle against the elements in the forests. Cross-country running is one of the last athletic disciplines where the discussion about new technology in running shoes is not yet an issue, if at all. Through the unpaved surface with mud, sand, hills in a competition with rounds full of sharp turns, the hand-to-hand combat comes alive again.

‘At the cross country it almost feels like you are walking barefoot’, says Foppen. ‘The softer the surface, the less the carbon in the shoes can give. You sink anyway, even if you have shoes on. This means that everyone has an equal chance again.’

Although? There are those who claim that the new superspikes that set world records on the track also give an advantage on soft ground. The shoes contain a carbon plate that, in combination with foam, provides a springy effect. The technology first revolutionized the marathon and is now at work on the track. Retired sprint legend Usain Bolt called the development “unfair and laughable.”

At the Warandeloop, the entire podium for the men wore the revolutionary track shoes, the so-called Dragonfly’s from Nike. She was also wearing pranks. ‘I could also go for special motocross shoes, but I couldn’t get my feet in them. I have quite wide feet.’

The rules state that most shoes are allowed in cross country running, provided they have a sole that is no higher than an inch. Like Foppen, many athletes opted for track shoes. Depending on how the course is, they can still adjust the length of the spikes.

Jip Vastenburg became Dutch champion with the women on spikes with a length of 9 millimeters. Just before the start, she switched the dots. “I actually wanted to run at 12 millimeters because I expected more mud and then needed more grip, but I saw that it was a bit drier than I saw in pictures.”

Vastenburg had a great day. She won her first Dutch cross title at the age of 27 after struggling with an eating disorder for years. Almost two years ago, Vastenburg warned in this newspaper about the dangers of years of top sport with underweight. ‘I am now fifteen kilos heavier than six years ago, but I am still winning. That’s another way to do it. It’s good to show that. The important thing is that I’m happy now and I wasn’t then.’

Vastenburg completed the eight kilometers through the forest in 27.43 minutes, finishing five seconds behind Sweden’s Meref Bahta in the international field.

Vastenburg wore shoes without a carbon plate. She prefers not to wear special motocross shoes with more profile. ‘I like to walk as light as possible. Then it is what you see is what you get. Everywhere you now have that discussion about the times and whether it is because of the shoes. Times don’t matter at all on the cross. It’s just running the way it was meant to be.’

Toiling through the woods on thinner soles does cause more muscle damage. Foppen would actually not participate in the Warandeloop in Tilburg. He signed up anyway when the Zevenheuvelenloop was canceled due to the umpteenth corona wave. In Nijmegen he had walked on the road on the revolutionary platform soles with carbon that made running less taxing. ‘That would have been nicer for my calves. Because I’m going to feel it now.’