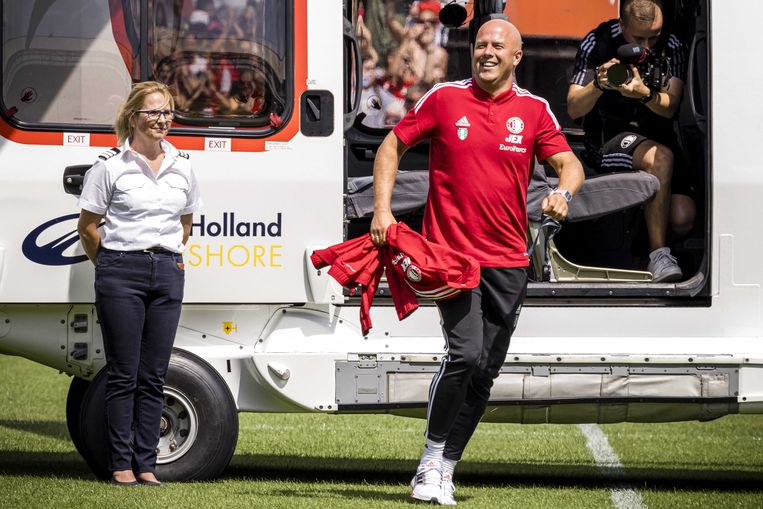 In the evening Arne Slot often stares at his phone for a long time. The Feyenoord coach craves new players, half of the basic team left, there are injuries and he just wants to move forward. He regularly switches off only at midnight, sighing: ‘Damn, not today again’.

Vitesse will be waiting for the first competition match in a week. Slot extended his contract for an additional year. He is more than a trainer of Feyenoord, he also calls and texts frequently with players he knew from his previous club AZ or he draws from the network of acquaintances. He speaks talents that have come to his attention or have been suggested by the scouting.

He is increasingly becoming the spider in the Rotterdam web, especially now that technical director Frank Arnesen has been struck down with physical malheur. But formalizing the deals is the work of others. For example, there is still no left back, other positions are also too thinly occupied for Slot’s taste.

Certainly in the knowledge that Fredrik Aursnes, the Norwegian anchor in midfield, is likely to leave, following Malacia, Til, Linssen, Dessers, Sinisterra and Nelson. It could lift the total transfer proceeds above €60 million, while the players sold have cost Feyenoord a fraction of that amount. A club record, but also an amount that Ajax collected this summer for one player, Lisandro Martinez.

The past week was quite good in terms of new players: Oussama Idrissi, Quinten Timber and Santi Giménez arrived in Rotterdam. But the puzzle is far from being solved, says the ambitious Slot. Unreachable presidents, complicated issues about player ownership, competition from other clubs, players who do not want to decide yet and Feyenoord’s still limited financial strength make it difficult to act. “If I was a manager of Manchester City, it would have been easier,” Slot said last week with a faint smile. ‘Then you just point to who you want and that person will come.’

But his position also has something, Slot can make his mark even more. It gives a kick when, for example, it turns out that Quinten Timber chooses Feyenoord, while Ajax, PSV and a number of foreign clubs were also very interested in the FC Utrecht midfielder. In the dance for his autograph, Slot, Timber has sketched a perspective that pleased him so much that he turned down better offers financially.

Timber (21) is physically strong, turns easily and likes to dribble, but only scored twice last season. The story goes that Ajax, where he left a year ago, sees him mainly as a defensive player. He can play more attacking at Feyenoord. That is ironic in a sense, because as a youth player Timber moved from Feyenoord to Ajax because he was seen as a defender in the Rotterdam youth academy, while he prefers to seek adventure.

Timber’s twin brother Jurriën, who still plays at Ajax, is a bit more pragmatic about this. He plays where the coach wants. As a result, twins, who slept in the same room last season, will be divided among the biggest rivals in the Netherlands.

Quinten Timber would cost Feyenoord no less than 8 million euros. Feyenoord never spent more money on a player. And for the signing of the Mexican Gimenez, Feyenoord, if it wants to have the majority of its transfer rights, will eventually end up at about the same amount. In that deal, the network of general director Dennis te Kloese, who worked in Mexico and assists where he can, paid off.

Giménez (21) is a hardworking, ball-resistant, goal-oriented striker with excellent headers, one of the bigger attacking Mexican talents of recent years, experts in Mexico estimate. He comes over from Cruz Azul where his father was a legend. That helped in the negotiations, but with the Giménez family is what Cruz Azul definitely does not want. Giménez, who arrived in Rotterdam yesterday, will still have to acclimatize and obtaining visas will also take some time.

Oussama Idrissi (26), who comes to Sevilla on a rental basis, was then shaken out of the trainer’s sleeve. The technically gifted winger was never as good as at AZ under Slot. It resulted in a dream transfer to the Spanish sub-topper, but then his star died out, Idrissi also operated anonymously on a rental basis at Ajax.

Still, Slot actually wants reinforcements in every line. That’s why he’s still staring at his phone at night. And then finally app some players yourself.