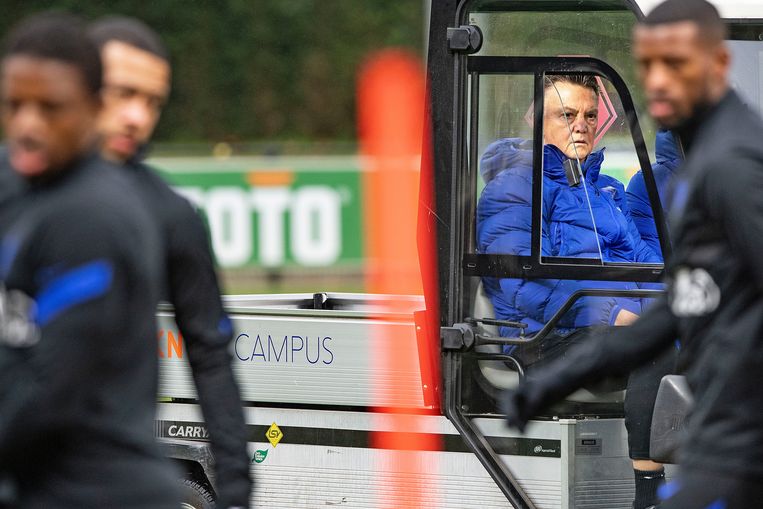 Bye Willem, Saturday evening around 8 o’clock, the Netherlands still had two match points to qualify for the World Cup, the Wuppies were able to get out of the attic. By now, a kind of ominous panic dominates me. How do you experience that?

‘Well, it’s a lot that happens all of a sudden. It already started on Friday, when the cabinet decided that the games will be played without an audience. We are pretty much the only country in the world in this respect, I see very exciting matches everywhere in full stadiums with discharge in the stands. We have an empty stadium on Tuesday evening.

‘Then you get a match in Montenegro on Saturday that is super bad. It didn’t seem to matter because you thought you were going to win it. At the end of the match I still had to look, also for the match report. I’ve never had to throw away so much of a piece.

‘Then you come back to the Netherlands, go to training on Monday and suddenly there is a lot of consternation. Turns out a reporter from the AD just tweeted that Van Gaal had fallen and is in a wheelchair. The players and staff always arrive by bicycle. The photos of it have been taken hundreds of times, but now all the photographers and cameramen stood by the path to see how Van Gaal would arrive. Norwegian reporters pulled us on the sleeve where Van Gaal was staying.

“The coach drove up in some sort of golf cart. The situation is quite laughable, because players on the training ground occasionally walk up to that cart as if they are going to get an ice cream instead of tactical cues. But for Van Gaal it is very sad that he falls and breaks his hip, at the age of 70.’

How is the atmosphere in the team?

‘Yes, it’s hard to say, we were only allowed to see 15 minutes of the training. But I have the feeling that the atmosphere is quite relaxed. The players are confident that everything will be fine. They play at home, against a lesser opponent.

“Before this weekend, everyone thought it had to happen today, so there is nothing wrong with that. In fact, the Norwegians have done even worse this weekend. They will play a draw at home against Latvia, a worse opponent than Montenegro.

‘But that’s not how they look. We had it in our own hands and gave away a 2-0 lead. They should be able to make it, but something strange can always happen, like a goalkeeper making a blunder.’

Speaking of which, the next blow came Monday night. First goalkeeper Justin Bijlow dropped out injured, who will be under the bar?

‘Yes, I’m a bit suspicious of that injury. He has scored moderately, now he is injured. He will probably have an injury, but maybe it will work out well for them.

‘I immediately had the feeling: Cillessen is going to keep goalkeeping. Van Gaal has previously said that Flek is the second goalkeeper. But it’s a final, Cillessen is experienced and knows the defenders he has to play with better. Fleks has never won a match in Orange. That is different for a goalkeeper than for a right winger. So I think Cillessen, but I wouldn’t put all my money on that.’

Everything seems to be going wrong this week. What impact does that have on the team?

“I think they will be very motivated. Such an injury to Van Gaal can also have a positive effect. The players had some doubts when he came, because there came that overbearing man who knows everything better. But I do feel that there is a good relationship between Van Gaal and the players. He praises the players a lot and it is also a very nice group.

“But when things go wrong, like against the Czech Republic at the European Championship, there is really no one to solve it. Who stands up to cause a change. You saw that again against Montenegro.

‘Depay is more of an individualist, Van Dijk is a real leader. You will hear him well tonight in the empty stadium, with his deep voice. Van Dijk is constantly coaching. The question is: will the team also do what it asks of them? Everyone will have to reach a reasonable level.’

In 2001, in his first period as national coach, it also came down to the last game for Van Gaal to qualify for the World Cup. To everyone’s surprise we lost to Ireland. What parallels do you see with that period?

‘That was a different group. He left him in the lurch, with players like Kluivert and Overmars with whom he had had many successes. He couldn’t touch it anymore. In Ireland they were trumped on mentality, Overmars got a terrible kick from Roy Keane in the beginning, then you knew exactly what was going to happen.

The fact that Van Gaal did not make it to the World Cup was a black page in his career for him. Now he is at the end of his career, if they lose tonight it could be his last game. He wanted to experience the football party of a World Cup one more time.

‘In 2001, the Netherlands gave away a 2-0 lead against Portugal in the last ten minutes, just like now against Montenegro. This group is different, they are eager and want to win for Van Gaal. In addition, the players also want to play a World Cup, many have never done so.

‘I also think it’s possible. There is still a bump tonight and if they make it it could be a great World Cup. But if they don’t make it, Van Gaal’s career will end like a candle, even if he booked a great performance with third place in 2014. One of the best Dutch coaches is then the worst national coach of all time, who missed the World Cup twice. ‘