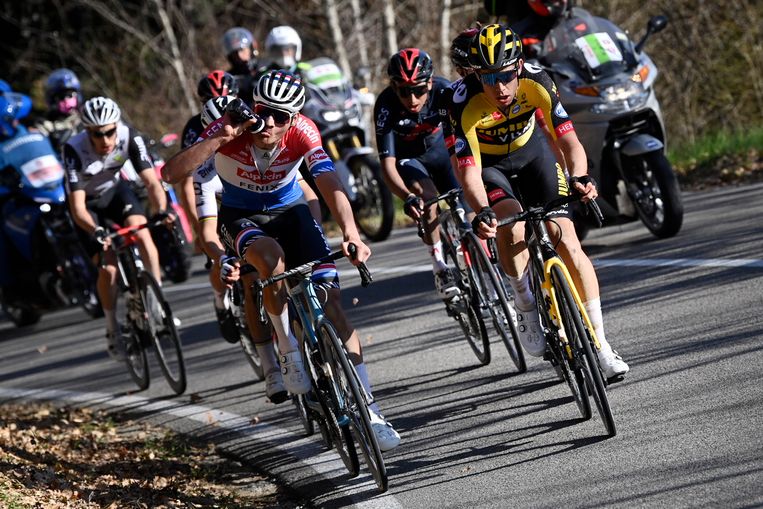 Mathieu van der Poel and Wout van Aert are the men of the preseason. On Sunday, the peloton in the Tour of Flanders will look at these two riders again. Or will Julian Alaphilippe benefit from the conflict?

With the stage victories of Jasper Stuyven in Milan-San Remo and Kasper Asgreen in the E3 Harelbeke, the pro peloton seemed to have found an answer to beat the two current rulers in cycling. They didn’t win, Mathieu van der Poel and Wout van Aert, and that is remarkable enough with their track record nowadays.

But who, on the eve of the Tour of Flanders, next Sunday, had hoped for even more grip in a successful strategy of the competition to defuse the two – together or separately – was disappointed. Last Sunday in Gent-Wevelgem, Van Aert was simply the strongest sprinter in a leading group, whose ranks had already been thinned with the help of his teammate at Jumbo-Visma Nathan van Hooydonck. The opponents were not discouraged by the result: Gent-Wevelgem cannot be compared to the Ronde.

Van der Poel battled Wednesday in Dwars door Vlaanderen with a complete off-day. Maybe it had been the sudden transition to the summer heat. He shrugged it off. Here too the result was stripped of weight: Dwars door Vlaanderen is much shorter than the Ronde, 184 against 254 kilometers and less difficult slopes. Says little about Sunday.

Van der Poel and Van Aert know that they race so dominantly in the classics that wherever they start, the race will be adjusted to them. Only world champion Julian Alaphilippe can boast of the same status. Stuyven took advantage of this in the Primavera by running away from a leading group of just under twenty riders in the calm after the descent of the Poggio. Everyone looked at the three favorites, but they did not dare to fully chase after top sprinter Caleb Ewan. The others also fit. If they don’t drive, then we certainly don’t.

Should that victory still be classified in the category fighting dogs for one leg, in the E3 Harelbeke the team of Deceuninck-Quickstep wrote the recipe for the dismantling of the duo. It happened in stages. Patrick Lefevere’s blue brigade almost completely flew up the Taaienberg. Van Aert and Van der Poel were able to participate in the violence, but when the dust had settled they discovered that they were isolated between an overwhelming number of Quick-Steppers. Van der Poel then got a taste of his own medicine: Asgreen started a long solo, with 67 kilometers to cycle to the finish. It was no coincidence that he was the one who started it. The Dane is a recognized speed racer.

Van der Poel and Van Aert, who had returned with the assistance of his team after a flat tire, were forced to join forces and do the dirty work in the pursuit. There was no need for Quick-Step, the others were already happy that they could keep up with the pace. After Van Aert overestimated himself on the Tiegemberg and fell silent for a while, Van der Poel was left alone as the engine of the hunt. Asgreen was eventually overtaken, took the time to recover and took off 5 kilometers from Harelbeke; it might as well have been a teammate. Now the Dutchman had little energy left. That’s how you smash the stars.

The course must have given hope to the competition for the Ronde. Try to rob the two of their men in time, attack and place the responsibility for the chase on their plate. Despite their halo of invincibility, they too sometimes run out of strength.
The urge to manifest in the race is also starting to take a toll, Van der Poel admitted in an online meeting with the media on Friday afternoon. The Italian races, in which he won the Strade Bianche and two stages in the Tirreno-Adriatico, have cut it. ‘I started again quite quickly after the World Cup cyclocross without really having a broad base. If you then go deep a few times, you will lose a little conditionally. Back on Belgian soil, I have not yet found the legs I had before. ‘ Van Aert is satisfied with his level of shape. He especially feels ‘mentally fresher’ than last October, when he was given the Tour after the Tour de France and the World Cup.

The question is which selection will be able to put the top favorites on their feet according to the above scenario. Can Citroën AG2R try something with Greg van Avermaet and Oliver Naesen? Ineos, with Dylan van Baarle and Tim Pidcock? Of course, the focus will be on Quick-Step, although the loss of Zdenek Stybar due to cardiac arrhythmias is a downer. More forward pawns and finishers are cycling united in one. Alaphilippe does not have to do much more than hook up with his biggest rivals. Allez, it’s up to you! He also knows: they always drive, Van Aert and Van der Poel.

The latter warned on Friday that this is not so obvious. “It’s not always just up to us to close the holes.” Certainly do not exclude them from shaking off a surprise. Like no other they are able to beat not only riders but also tactics.