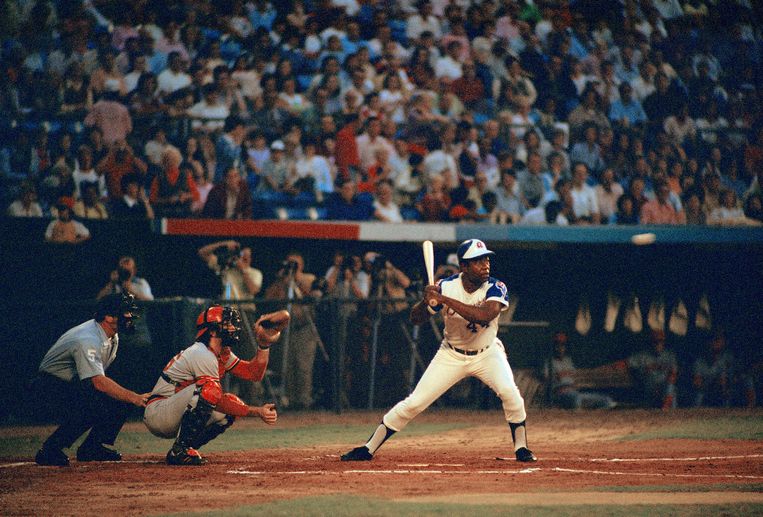 Only one man admired the legendary boxer Muhammad Ali more than himself: Henry Louis Aaron, renamed Hank, or better, Hammerin ‘Hank, by the American media. On Wednesday, the 86-year-old homerun king was buried in southern Atlanta, where deep-rooted racism was his biggest challenger throughout his career.

During his illustrious career, Aaron hammered 755 home runs over the fences of Major League Baseball (MLB) stadiums. His most famous hit was on April 8 of 1974, when he was at home in Atlanta, playing for his Braves, breaking Babe Ruth’s record number. In 1935 he had taken his 714th and final direct hit.

Reaching the milestone, homerun number 715, Aaron paid a bitter toll. On some days leading up to his record hit, the baseball player received as many as 3,000 letters, many of which were racist. How did he dream of approaching Ruth’s record as a black man? In Atlanta, Aaron was guarded by two police officers. His oldest daughter, a student at the University of Nashville, also received death threats.

The hatred was so intense that Aaron feared for his life, but stoically he continued to report behind the pickguard. As a child from Mobile, Alabama, in the heart of the segregated South, he was used to something.

One day, as he often did, young Aaron tested his speed by rolling a ball over the roof of his childhood home and catching it on the other side. His mother’s terrified cry would stay with him forever: “Go in and hide under the bed!” Shortly afterwards, some members of the Ku Klux Klan arrived and set the house on fire.

In Mobile, Aaron watched his idol Jackie Robinson, the first black player in the MBL in 1947, address the local youth. It gave him courage. There was a path for him too.

As a 17-year-old, Aaron briefly played in the so-called Negro Leagues, competitions for black men who had no place in the MLB according to the regulations. Until Robinson’s breakthrough, baseball, America’s main pastime, was a purely white affair. It wasn’t until late last year that the MLB decided to add the statistics from the Negro Leagues to the record books.

Through various development teams, Aaron ended up at Milwaukee Braves in 1954, the club that would move to Atlanta in 1966. “I lived in the south and I never want to live there again,” he said at the time. Nevertheless, Hammerin ‘Hank remained loyal to his club. Aaron would die in Atlanta, where he held a board position with the Braves.

Because of his dazzling game, supporters of the club could not help but embrace him, but it was not always heartfelt. Aaron also had to deal with racist expressions in his own stadium. In the early years of his pro career, he recalled, he was not allowed to sleep in the same hotel as his white teammates.

When he hit his 715th homerun against the Los Angeles Dodgers on April 8, the game was halted to put him in the spotlight. He was cheered for more than ten minutes in the packed Fulton-County Stadium. “What a great moment for baseball,” said legendary commentator Vin Scully. “A black man gets a standing ovation in the Deep South for breaking the record of a baseball idol.”

Aaron himself had worse memories of the moment, he revealed twenty years later in an interview with The New York Times. “For the first time I saw really clearly what this country stands for,” he looked back. ‘Because of all the threats, my children had to live like a prison and I like a pig in a slaughterhouse. I had to go into hiding, had to take the back door of stadiums. Every day I received threatening letters. The bitter aftertaste will never go away. They cut a piece out of my heart. ‘

It wasn’t until he neared Ruth’s record that Aaron gained national prominence, even though he’d led his Milwaukee Brewers to a championship in 1957. Aaron was exceptional in his constancy, but understated as his rival Willie May was flamboyant.

In 21 of his 23 seasons, he was named to the all-start team. The man from Mobile could do more than hammer: he still has the most basehits that led to runs to his name. Aaron reached the most bases of all and was also a gifted fielder.

His home run record stood until 2007, when doping suspect Barry Bonds broke it. According to fans, not Bonds, but Aaron is still the true home king.

A foundation was established in his name last week to encourage minority participation in baseball. In recent years, the proportion of African American players in MLB has declined dramatically. In Atlanta, Aaron was immortalized with a statue in 2017, in the pose he used to knock his 715th over the gates. “I never wanted Babe Ruth to be forgotten,” he said in 1982 upon his entry into the Hall of Fame. “I wanted people to remember Henry Aaron.”

We succeeded. Following his death, former President Barack Obama said, “He is one of the strongest people I have ever known.”