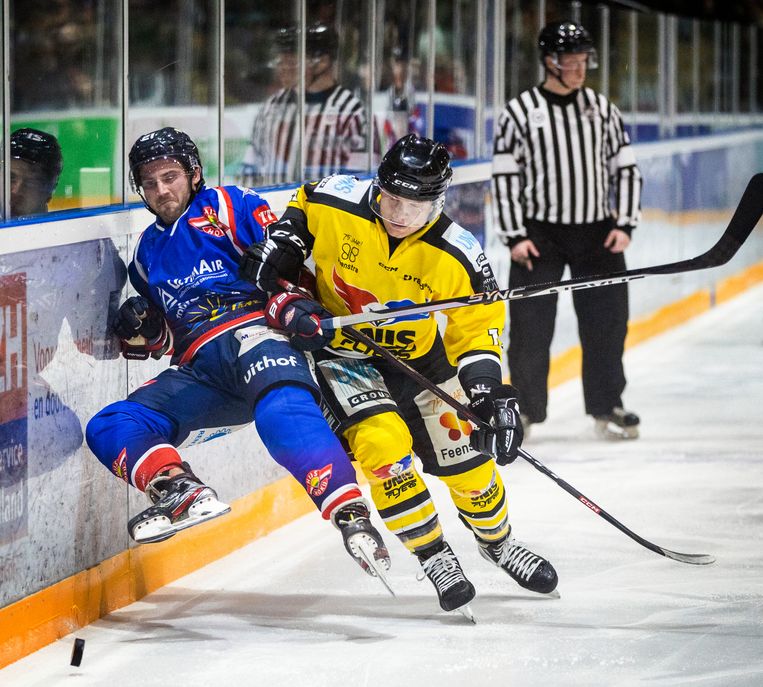 The sound that ripples from the stands in the ice hockey hall of De Uithof in The Hague is deafening. There are 3,000 people inside for the cup final between Hijs Hokij and the Flyers, maybe more. All seats are occupied and yet there are still fans at the top of the stands. The pounding stadium and hoarse throats can’t hide the fact that the sport is reeling under the pressure of the energy crisis.

‘These are things you don’t concern yourself with as a player at all,’ says Jurryt Smid afterwards. The captain of the Hijs Hokij from The Hague went on his skates to look for the cup that he just won with his team. In the festivities after the victory, the huge silver thing has disappeared somewhere in the catacombs. He returns without a trophy, but with the wide grin that belongs to a winner.

Last week, Uithof director Eugène de la Croix told the AD that given the current energy prices, he is considering giving up the ice rinks and turning them into padel courts. Smith did not miss this. He knows how difficult it is in The Hague. ‘The energy crisis is an issue that affects society as a whole. And an ice rink is the first to be affected. I hope we can keep playing ice hockey. This season is only short and we will succeed, but whether there will be an ice rink after that is uncertain.’

It is not an exclusively The Hague concern. Jan Hopstaken, chairman of Ice Hockey Netherlands, visited a quiet room during the game to review the state of affairs. The entire ice hockey sport is having a hard time, he says. ‘Ice hockey has always been vulnerable as a small sport, but we really see the energy crisis as a danger.’

The burdens are not evenly distributed. The Flyers play in Thialf and that is the only job that is already assured of government support. And it is the team that breaks open the match in the cup final with a goal from Jasper Nordmann.

Almost immediately, Hijs Hokij puts in a counterpunch. A long shot from Bjorn Borgman flies in. Until then, the game was not very good, Smid admits. “A pinball machine,” he calls it. Exciting yes, but uncontrolled.

After the equalizer, Hijs Hokij wants to continue, but that does not work. There is a sudden timeout due to a boarding problem. The plexiglass hangs loose behind the goal of Heerenveen. A man with a ladder tries with great difficulty to get the plate back between the uprights. A loud cheer is heard when it is successful.

Meanwhile, the inevitable Snollebollekes in sports stadiums can be heard through the loudspeakers. For once the text – ‘The tent that is being renovated’ – is appropriate. ‘From left to right’ as well, by the way, because after the restart the battle is just as fierce as just before. With less than eight minutes on the clock, play resumes and there is no more dawdling on either side.

But the minutes are ticking away and it comes to extra time where Hijs Hokij finally manages to take advantage of an overpayment when Trevor Hunt ends up on the penalty bench. Before he can return, Jay de Ruiter rams the puck behind the Frisian keeper Martijn Oosterwijk. In no time the ice is strewn with the helmets thrown off in euphoria and the sticks thrown away by the players from The Hague. It is the fifth time that the club has won the cup.

Hopstaken is on the ice a little later to hand out the goblet. This is one of those days where he can fully enjoy this sport. His union has only about 4,000 members and yet there are 3,000 people celebrating here.

There are also days when he is gloomier. Of the four Dutch clubs in the Belgian-Dutch BeNe League, three may run into problems due to the high electricity prices. In addition to Hijs Hokij, these are the Zoetermeer Panters and the Eaters from Geleen. And then there are the smaller clubs from the premier league for whom problems threaten.

The Tilburg Trappers, who play in the German league, are supported by their municipality, but association chairman Hopstaken understands that other local authorities are not always able to help. ‘I don’t think it’s strange if municipalities have to choose between citizens who sometimes don’t have food and an ice rink.’

It doesn’t diminish his concerns. And it determines the ambitions he cherishes with Ice Hockey Netherlands. ‘Suppose a quarter of the ice rinks have to close, would you then have to talk about being at the Games in 2030? No, we should be concerned with how we keep the sport alive. That’s quite a lot.’

The Hague players celebrate the victory exuberantly. With cans of beer and cheap sparkling wine they spray each other, have their picture taken and friends and family fall around the neck. There are no thoughts about a gloomy future. But when asked, Smid knows what needs to be done: support needs to be provided no matter what. Ice hockey lives here. It lives in Heerenveen. And you can’t stop playing ice hockey then.’