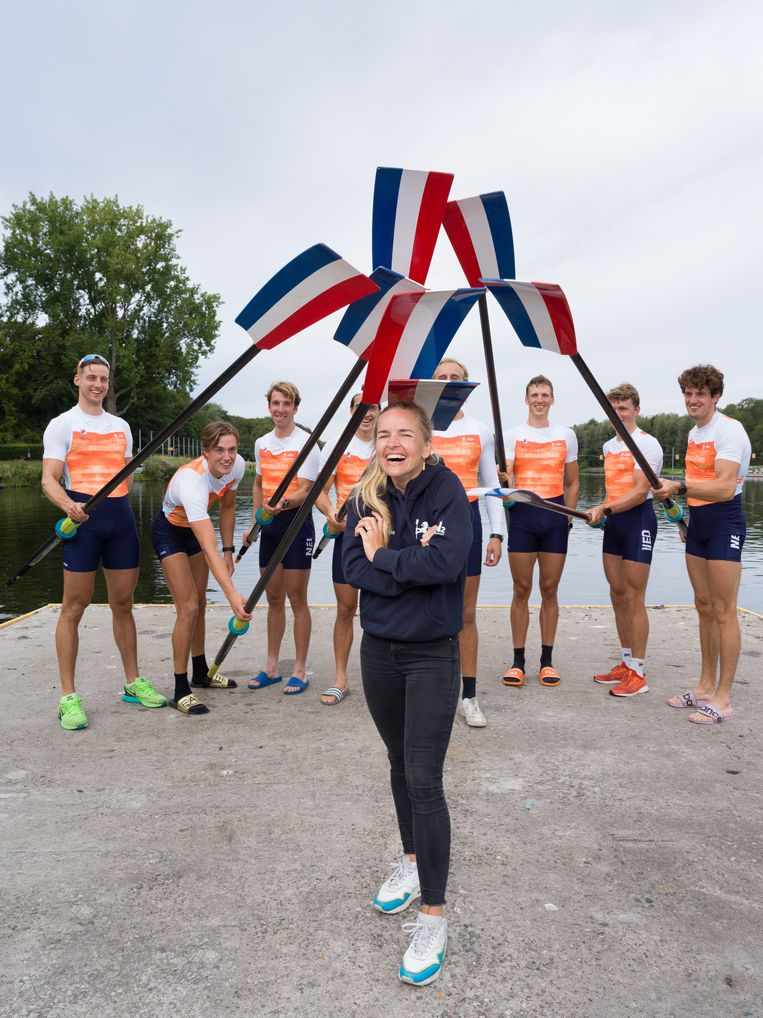 Eight men climb out of the boat on the Amsterdam Bosbaan. The training is over after an hour and a half this morning, for the rowers and the helmsman, who barely made herself heard in her seat at the helm. The audiobook sounded in the boat Harry Potter and the Philosopher’s Stone through the speakers.

“It’s nice if they don’t have to listen to my panting all the time,” says Dieuwke Fetter about the unusual preparation for the World Rowing Championships, which started on Sunday in the Czech Republic. “We’re now at chapter twelve. Everyone is now assigned a character. That makes the atmosphere nice and relaxed.’ She has just been renamed Dobby, Harry Potter’s house elf.

Fetter stands out among the tall and broad-shouldered men because of her small stature of 1.60 meters. That was also the case when she was on the podium together with Abe Wiersma, Niki van Sprang, Lennart van Lierop, Guillaume Krommenhoek, Michiel Mantel, Mick Makker, Guus Mollee and Jacob van de Kerkhof at the European Championships in Munich last August.

And this is the case on the banks of the Bosbaan, where the rowers lift their 18-metre-long colossus out of the water with a smooth movement. Looking for a few trestles to lay the boat on, Fetter navigates between the long lines. The little helmsman is a mood maker, coach and teammate in one.

A boat goes straight ahead

The eight is the only Olympic rowing number with a mate. In all other boats, the rowers themselves ensure that they stay on course on the 2,000 meters between start and finish. Steering itself is not that complicated, according to 31-year-old Fetter. ‘Basically, a boat goes straight ahead. Wind and swell can make it more difficult, but you don’t really need to steer when things get tough.’

A helmswoman should not want it either, every movement with the tiny rudder that is attached to the stern leads to a loss of speed. “It’s like tossing a bucket overboard when you change your rudder.”

Much more important is her role as the eyes and ears of the boat. Pulling backwards on the oars, the rowers have only a poor view of the rest of the field and little idea of ​​the exact distance they have already covered or still have ahead of them. Fetter keeps an eye on this and gives the commands if it goes too fast or too slow or when the final sprint has to be started. “To a certain extent I am a coach in the boat, but there is also a coach on the side. I am also part of the team. You can compromise a bit there.’

Not obvious: a woman among the men

Fetter is already the third mate in a row in the men’s eight. Aranka Kops and Eline Berger preceded her for the past three years. Obviously it is not, a woman among the men. ‘A helmsman is perhaps more natural or easier. He can walk straight into the dressing room because he is also a man, can be in the same room with another man. They’re small things, but I’m always a girl, not a boy.’

Those are the practical matters, but it does not form an obstacle in the route to top performance. Besides, she’s used to it. She has been at the helm of the women’s eight for the previous three years, but before that she has always sent men. She feels comfortable with it and achieved success. In 2017, she helped Nereus eight between the national selections of other countries to an unlikely World Cup victory. She fired on the men, including Wiersma and Makker, screaming. “That worked.”

The team does not talk much about the difference between men and women. She did explain to the crew of the national men’s eight that she shows her emotions differently than she does. ‘Sometimes I cry. I always say: don’t be alarmed, don’t make a big deal of it. You get angry, with me it’s a vale of tears. That doesn’t mean I’m hurt. It’s my outlet and after fifteen minutes it’s over again.’

She may not make an athletic contribution, but Fetter is considered a full member of the team. She is according to the rules of the sport – ‘they have to cross the finish line with me, otherwise they are disqualified’ – but also in other areas. Just like the rowers, she received the silver in Munich and has the so-called A status of NOCNSF as her teammates. She is therefore entitled to a top sports stipend and falls under the rowers’ anti-doping regime.

Already three times this year doping inspectors showed up on her doorstep early in the morning. A lot of people think that’s a bit crazy and she understands that. Because how can a mate benefit from stimulants? She doesn’t have to exert herself. ‘Our weight plays a role and we have to be able to concentrate well, so you can imagine all kinds of things. Although I can’t imagine that there are people who do that.’

If she is already a member of the team in all respects, shouldn’t it actually be the Holland 9? Fetter doesn’t want to go that far. ‘I always think I have a lot of influence, but that’s disappointing. If I pass out, they also get from A to B. That’s why I call myself more of a tool. I make it easier for them.’ She points out the way in which the competition class is officially abbreviated; as 8+. “I’m that plus.”

A ‘steering wheel’ should be light. This is favorable for the total weight of the boat and crew and therefore for the speed. There is, however, a lower limit. The helmsman must not be too skinny. There is a minimum weight of 55 kilos. Fetter is actually just below that, but with a hearty breakfast on race day and quite a bit to drink, she’ll make it. It takes no effort for her to remain so light. ‘I’m very lucky to be very small. I can do whatever I want. I am a blessed person.’

At the same time, it was her limited stature that thwarted a future as a rower. When she joined the Amsterdam student rowing club Nereus in 2013, she was actually hoping for a spot on the oars. She turned out to be too small, too lightly built, and switched to the selection for steering. It surprised her that she got through that. “I was a super chaoot, talked way too much.” Not good qualities for someone who has to keep an overview.

She is still not very structured in her life, but she has learned to work systematically in the boat. And she knows how important it is in a match to choose the moments to speak or to remain silent. ‘It’s timing, feeling, what is needed. You prefer to say as little as possible, because then you can disrupt as little as possible.’

Although Fetter never became a rower herself, she enjoys her current position. She’s ringside, no one is as close to the action as she is. “The coach on the side has to let things go, I’m really part of the race. I feel the same adrenaline as someone who rows. At the same time, I am less tired. They go to the branch and I sit and pull the strings, literally and figuratively. I have all the advantages and none of the disadvantages.’

Her laugh is heard again. Here is a happy man. ‘How often can you be part of something that people put so much time and energy into? Where everyone goes for one goal?’