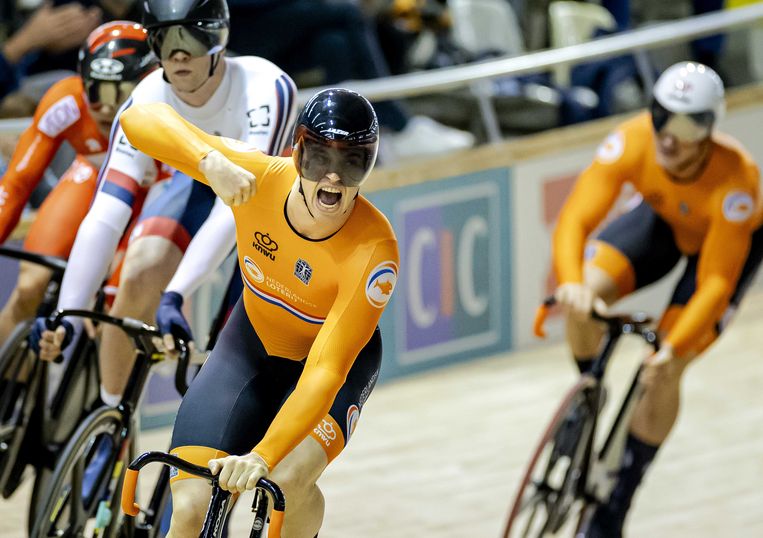 The courage must gradually sink into the shoes of the opponents: even in the most unpredictable part of track cycling, the keirin, there is little to do against the dominance of two Dutch male putters. On Thursday evening at the World Championships in Roubaix, Harrie Lavreysen rode sovereignly to the title, with Jeffrey Hoogland in his wake; gold and silver again in their already bulging trophy cabinets.

As reigning world champion on the keirin, Lavreysen apparently wanted to leave nothing to chance at the cycling track in Roubaix on Thursday evening. In the three laps remaining after six riders have completed the same number of laps behind a pacemaker, a complicated joust can ensue. Unexpected accelerations, excruciating temporization, dare to play poker on the impatience of the opponent.

The Brabanter had no appetite for that. Immediately after leaving the track, the derny moved from fourth to the front, risking paying for that attack sometime in the 2.5 laps remaining. That didn’t happen. It was Hoogland who came alongside in the end, but Lavreysen parried the attack by squeezing out another acceleration. He was about a bike length ahead of his big rival at the finish line.

The tactic was the answer to the result in his previous matches on the keirin. At the Olympic Games in Tokyo, he was surprised by the British Jason Kenny, who immediately took off in the lead. No one was willing to immediately give chase. Only bronze remained. At the European Championships earlier this month in Grenchen, Switzerland, Hoogland was too quick for him. Lavreysen, who started last, dropped a gap, then came up very quickly, but was forced twice in his attempt to catch up with the others by Russian Mikhail Jakovlev, high up in the track. He then let it go and responded with a shrug afterwards. “That’s keirin.” Jakovlev was third behind the Dutch in Roubaix on Thursday.

With his second gold medal, Lavreysen is already back on track for a hat-trick at a World Cup. After the victories in the team sprint (with Hoogland and Roy van den Berg) and the keirin, the sprint awaits on Sunday, in which the Nijverdaller will probably be his main opponent again. Eighteen months ago, there had been three golds in the same parts at the World Cup in Berlin. But Hoogland also has chances for a three-stroke. Apart from the sprint, he also finishes in the one kilometer, the part in which he became European champion in Switzerland.

Olympic champion on the keirin Shanne Braspennincx disappeared prematurely from the sprint on Thursday evening. She lost in two heats to German World Champion Emma Hinze. On Sunday she will compete in the discipline in which she won gold in Tokyo.