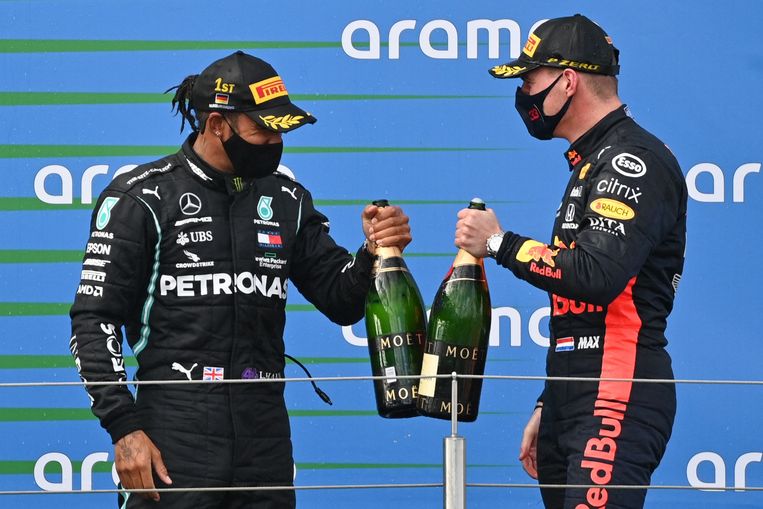 The laugh could be heard over the on-board radio through Lewis Hamilton’s voice. Less than ten seconds earlier, he had equaled Michael Schumacher’s record of 91 race victories with a faultless race on Sunday at the Nürgburgring. The Briton was only immediately told by his team that Max Verstappen behind him had taken the fastest lap time from him in the last meters of the race, good for one World Cup point.

‘I saw it. They’re getting fast, man, ”Hamilton replied, appreciating the 23-year-old’s eagerness. No doubt it reminded him of the time when he was the same age as Verstappen. Just as fearless, he then went head-to-head with Fernando Alonso, his teammate at McLaren and the undisputed king of the premier class at the time. As he is now himself.

Fifteen minutes later, Hamilton received a helmet from Schumacher because of his special milestone, from Schumacher’s son Mick. Hamilton shook his head. “An enormous honor,” he said, visibly moved. “I still remember choosing Michael in computer games. I never expected to get close to his records. ‘

He couldn’t have picked a more appropriate time of the season to match Schumacher in advance than the weekend at the Nürburgring. On the asphalt in the German GP of the Eifel, which had been hastily put on the calendar due to the corona pandemic, the best came to the surface. He likes to see it more often in his sport, he has stated several times.

The Nürburgring had not been visited by Formula 1 since 2013, leaving teams unable to prepare their drivers for the race with loads of data from previous seasons. The two training sessions on Friday also ended: fog prevented the medical helicopter from taking off, making driving irresponsible. Drivers thus only had the training on Saturday to master the circuit and adjust their cars.

Furthermore, the weather added a number of unpredictable ingredients. Ferrari driver Vettel had already described the Eifel in October as the ‘Siberia of Germany’ and with an average temperature of around 9 degrees it was an unusually cold weekend by Formula 1 standards.

The cold mainly had an effect on getting and keeping the tires at the right temperature. The better a driver knows how to do this, the less hard the rubber will wear and the better the car can be controlled. The GP on Sunday was therefore mainly a knockout race between drivers who knew best how to deal with those tricky circumstances.

Mercedes driver Valtteri Bottas was the first to fall through the ice. The Finn had started from first place, but Hamilton saw his teammate struggling to keep his front tires fresh after a few laps. He pressured him. Bottas braked, lost the lead and a moment later retired with engine trouble.

Hamilton and Verstappen then underlined with one fastest lap after another that they are the best on the field this season. They drove away from the rest for tens of seconds. Purely on engine power, Hamilton was relatively easy ahead of Verstappen, so the Red Bull driver quickly knew that the victory was out of sight.

Behind it, the contrast between Verstappen and his teammate Alexander Albon was striking. In the exact same car, he failed to get out of midfield. In his frantic efforts to gain ground, he drove off the front wing of an Alpha Tauri, among other things. He was punished for this and eventually Albon shouted despondently over the on-board radio that it was being made too difficult for him.

Verstappen’s former teammate Daniel Ricciardo showed that he can excel in one of the toughest races of the year. He gave his Renault team the first podium place since the French car brand’s return to the sport in 2016. As a result, the Australian is allowed to choose a tattoo for his team boss Cyril Abiteboul. “I think it will have something to do with me, with a German sauce,” Ricciardo joked after the race about the bet he made with his team boss earlier this year.

Hamilton took a giant step towards his seventh world title at the Nürburgring. Due to the failure of his teammate Bottas, he is now no less than 69 points for number two in the World Cup rankings. At the earliest, he will match Schumacher next month when it comes to the number of titles. Given Mercedes’ supremacy next year, he has a good chance of surpassing the record champion in 2021.

But Hamilton does not have to go as smoothly as this year. Give him more challenging weekends like at the Nürburgring. “Because I enjoy the fights,” he said.