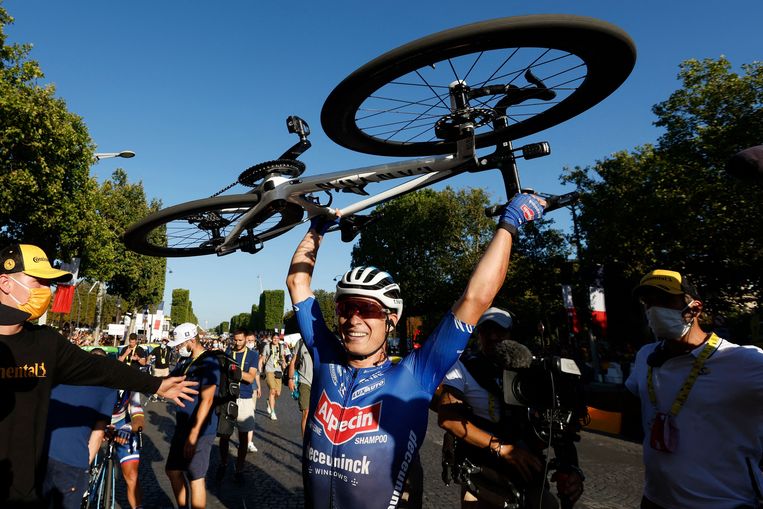 It is the second stage win this Tour for the Belgian, who also won the fifteenth stage in Carcassonne. That stage exactly one week before ‘Paris’ will be remembered as the warmest this Tour. Numerous riders ran into problems due to the heat, between 37 and 40 degrees.

Philipsen then won in Carcassonne against Wout van Aert. That was revenge for a painful miss by Philipsen in the fourth stage to Calais. Van Aert won that stage with a few seconds ahead of the peloton. His compatriot had just missed that moment. Passionately cheering for, finally, finally, his first Tour stage, Philipsen crossed the line in second.

Van Aert, winner of the points classification, was the big absentee on the Champs-Élysées. He won the top prize for sprinters last year after winning the Saturday time trial the day before. Van Aert did the latter again this year, but in Paris he chose to cross the line hand-in-hand with his four remaining teammates from Jumbo-Visma at the back of the peloton. Thus, the team celebrated six stage victories, the green jersey, the mountain jersey and the most important, the yellow jersey on the shoulders of Jonas Vingegaard.

The two Dutch top sprinters, Dylan Groenewegen and Fabio Jakobsen, had imagined considerably more of the finish in Paris. Jakobsen in particular caused a stir last week by making every effort to finish on time in mountain stages, necessary to be allowed to participate in the ‘Champs-Élysées’ at all. His team, Quick-Step, however, did not get involved in the battle and Jakobsen finished thirteenth in the last stage of this Tour.

Groenewegen did better. His team, BikeExchange, was well positioned as the peloton came out of the final corner with a 700m straight left over the cobblestones. However, Groenewegen was launched a little too early and only took the lead with Philipsen in his wheel. He could wait for his moment, while the tank of Groenewegen, winner in the same place in 2017, became empty. The Amsterdammer, winner of this Tour of the third and final stage in Denmark, came in second ahead of Intermarché’s sprinter, Alexander Kristoff, who won ‘Champs-Élysées’ in 2018.

The winner of the final classification was Jonas Vingegaard. It took 79 hours and more than 32 minutes to cover the 3,350 kilometers of the 109th edition of the Tour. With this, the Dane has completed the fastest Tour de France ever. At an average speed of over 42 kilometers per hour, Vingegaard and his closest competitors raced on Danish, Belgian, Swiss and French roads. The previous record, 41.7 kilometers per hour, was held by Lance Armstrong and has been removed from the tableau together with his victory.

Number last, top sprinter Caleb Ewan, winner in Paris in 2019 and Sunday ninth, took almost six hours longer than Vingegaard. Due to bad luck and falls, he reached an average speed of 39 kilometers per hour. Taco van der Hoorn, the one for de Volkskrant reported on his Tour debut, did slightly better than Ewan and finished 125th in just over five hours.