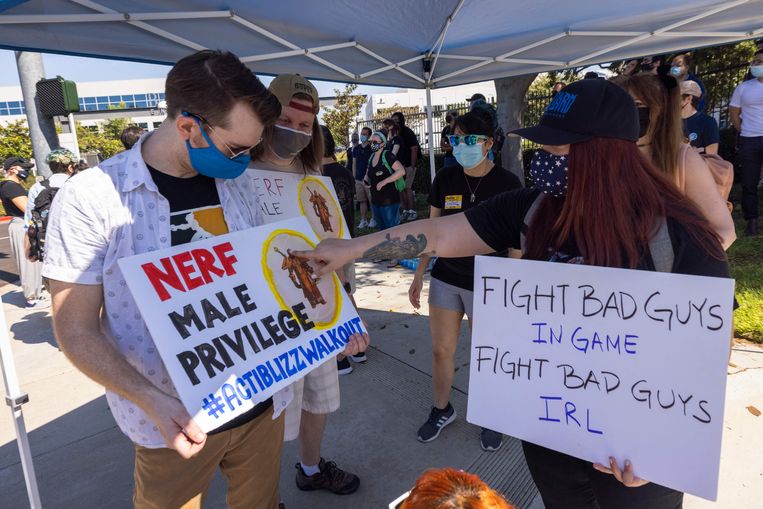 The allegations of abusive sexism and misconduct by male employees at Activision Blizzard pose a wider problem in the gaming world. Three years ago, the American Riot Games was sued by five former employees for discrimination and sexism in the workplace. The French Ubisoft would have left sexual misconduct unpunished for years, Bloomberg news agency previously wrote in an extensive report.

But previous complaints did not lead to a strike of this magnitude. Gamers also joined the protest, using the hashtag #ActiBlizzWalkout. The Houston Outlaws, a team of professional Overwatch players (a game created by Activision Blizzard) have shut down their social media channels for a few hours in solidarity.

The indictment, prepared by a California government agency, is full of concrete examples of transgressive behavior. Men who openly joking about rape come into the office, crawl behind their consoles to play a game and pass the responsibility for their work onto female colleagues. Human resources employees, often friends with the colleagues complained about, do not take complaints seriously. In addition, they pass statements to the party complained of, causing women to face retaliation.

Activision Blizzard’s top executives have vehemently denied the allegations. They would not be in line with the current corporate culture. “This kind of irresponsible behavior by unaccountable bureaucrats is driving many of the best companies out of California,” the company wrote in a statement.

This sparked anger among the workers. Of the 9,500, 2,600 signed a letter expressing their dissatisfaction. The CEO of Activision Blizzard made an apology for the ‘unfeeling’ reaction on Tuesday and promised to have a law firm investigate the corporate culture immediately. Executives who have exhibited transgressive behavior will be fired, CEO Bobby Kotick wrote.

Despite the persistent problems within the companies themselves, the games made by the game studios pay more attention to emancipation and diversity than a few years ago. Tech platform wired describes how a turning point was felt in 2015 at the game exhibitions, in which new games are presented.

Women have taken on an increasing share of the gamer population – now half of gamers are women – but they hardly saw themselves represented in a credible way. After complaints about the lack of (playable) female characters, major game studios are increasingly putting women in the foreground. Incidentally, the share of female employees at the discredited game companies is less than 22 percent.

EA Games first added female teams in the popular soccer game FIFA in 2015. A few years later, the Dutch game studio Guerilla Games, owned by Sony, came up with Horizon Zero Dawn featuring an award-winning game featuring a female protagonist going through character development. She can hunt, fight and climb excellently even without prominent curves. Game studio Naughty Dog made with . last year The Last of Us II a game in which two lesbian women take the lead. It won a record number of awards.

Those who create their own avatar usually no longer have to choose between a man or a woman, with accompanying hairstyles, body parts and voice. You can now create a completely custom composition. Players can play games like Assassin’s Creed also engage in homosexual relationships.

Yet the industry is far from there, concludes wired. The platform analyzed the representation of women in the lead roles of games launched since 2015. In less than 10 percent of the cases, a female hero was central, in 2019 that share fell by only 5 percent below the level of 2015.

The question is whether the protests from workers and gamers will bring about change. At the French Ubisoft, known for the popular game series Assassin’s Creed, complaints of discrimination and sexual harassment came to light last summer. The fuss initially forced CEO Yves Guillemot to take serious steps. He fired his good friend Serge Hascoët, then cco. Several studio heads, creative directors and high-ranking executives within human resources were banned or resigned as a result of transgressive behaviour.

Still, Ubisoft employees are not satisfied. They rally behind the strikers of Activision Blizzard in a letter of protest. The letter was signed by five hundred (former) employees. They underline that a year has now passed since the indictments, but that despite the departure of people at the top, not enough has been done to fight the problem at the roots.

It hurts that the top of the game companies that are under fire do not recognize themselves in complaints or ‘scare’ about misconduct. And that while the complaints have been piling up for years, the employees write. “We have to stop being shocked. This vicious circle of failing to intervene and giving perpetrators a second chance must stop.’