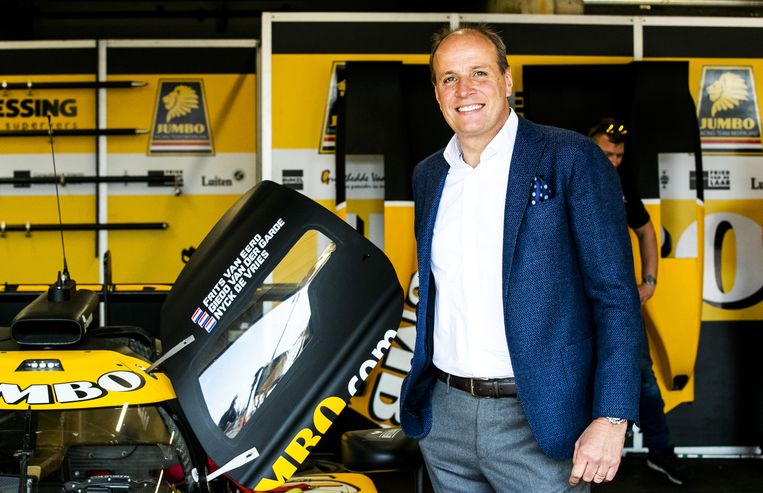 The Jumbo CEO was swinging between the pink tutus and juggling clowns. In a white and gold-clad suit, a trumpet in his hand. Under the watchful eye of 65 thousand overjoyed fans, not of Frits van Eerd, but of De Toppers. Somewhere in his busy schedule, the supermarket manager had found time to accompany Gerard Joling and René Froger with his big band in the Amsterdam Arena.

As heir to the Jumbo empire, brother-in-law of Rituals founder Raymond Cloosterman and partner of Famke Heinrichs, a descendant of the Van der Valk entrepreneurial family, Van Eerd is used to some attention. Yet the successful CEO of Jumbo does not need to be in the spotlight all the time, his sister Colette Cloosterman-van Eerd told last year. de Volkskrant. ‘With every article in the newspaper, a piece is taken from you.’

Now that her brother is in the news as a suspect in a money laundering investigation, that statement has taken on a different meaning.

Fiod on the sidewalk

In his beloved Brabant, things went wrong for the supermarket boss last week. On Tuesday morning, the tax investigation service Fiod was at his quirky furnished villa in Heeswijk-Dinther. While he searched the house and the vehicle fleet of the CEO, raids also took place at other homes and business premises in Brabant, Drenthe and Groningen. Nine suspects were arrested, including Van Eerd.

Justice suspects them of having cooperated to a greater or lesser extent in fraudulent practices. Large sums of money were allegedly laundered through ‘unexplained cash deposits’, real estate and car trades, and motocross sponsorship contracts.

It is therefore not entirely surprising that the alleged main suspect, 58-year-old Theo E. from Gasteren, is a former motocross racer and car dealer. E. was previously incarcerated for money laundering and fraud. He would also be known to Fred Ros, a key witness from the liquidation process of Willem Holleeder, with whom he provided the Amsterdam underworld with luxury cars.

The big question is how a successful and jovial entrepreneur from the Jumbo family fits into this list of convicted criminals.

It’s no secret that Van Eerd loves car and motorsport. He saves Formula 1 cars, has been sponsoring F1 champion Max Verstappen for years and based the yellow color of supermarket chain Jumbo on the yellow-black Minardi cars that he saw racing at Zandvoort as a teenager. Although he gave up his dream of becoming a top driver for the family business, the CEO himself likes to get behind the wheel. Whether on asphalt for Formula Renault or in a desert for the Dakar Rally.

In 2016, Van Eerd founded his own racing team: Racing Team Nederland. Three years later, together with teammates and top drivers Nyck de Vries and Giedo van der Garde, he won the ‘6 Hours of Fuji’, a World Endurance Championship long-distance race. Van Eerd remains modest. In the TV Show he emphasizes that he is not a professional racing driver, ‘although I try’. But the term hobbyist is not for him. Everything Van Eerd does, he wants to do well.

Motorsport, which he says made him a better CEO, now seems to threaten his position. Theo E. and Van Eerd know each other from motorsport. For example, E. was team manager of a Jumbo-sponsored motocross team for many years. It is unclear whether and to what extent the two were still in contact.

The investigation into Van Eerd has created at least a small crack in the reputation of the Jumbo family business. The company that he himself has led to great successes.

From wholesaler to supermarket

It was his father, Karel van Eerd, who transformed the family business from a wholesaler into a supermarket and shaped Jumbo’s success formula. Yet the counter only reached just over a hundred supermarket branches when Frits became general manager in 2009. Thanks to the acquisition of Super de Boer, the brand new CEO was able to add more than three hundred stores in one fell swoop. Three years later, the group successfully swallowed C1000, followed by La Place and Hema. With more than seven hundred branches, the family business now accounts for an annual turnover of 9.9 billion euros.

A very smart strategist, as Paul Moers, former Jumbo advisor, described the top man. Van Eerd is not a conventional businessman. His environment describes him as a jovial man, the type of boss who lends all employees in his expensive fleet a luxury car when they get married. Someone who invites his cleaner to the party in honor of his 50th birthday.

As an employer of tens of thousands of employees, Van Eerd also sees a social role for itself. Especially in Veghel, where Jumbo’s head office is located. “It’s about hard work,” he told the Brabantse Omroep at the end of last year bailiwick‘But people should also be able to do sports or go to a festival in their spare time. I feel jointly responsible for fun things happening in your own community.’

That ‘sense of responsibility’ and above all the great love for sports made the yellow of ‘his’ Jumbo a permanent color on many sports uniforms and at events. They now seem less spotless than before. What the suspicions surrounding Van Eerd mean for Jumbo remains a mystery for the time being. When asked, the supermarket chain says it will not answer questions about Van Eerd’s position.