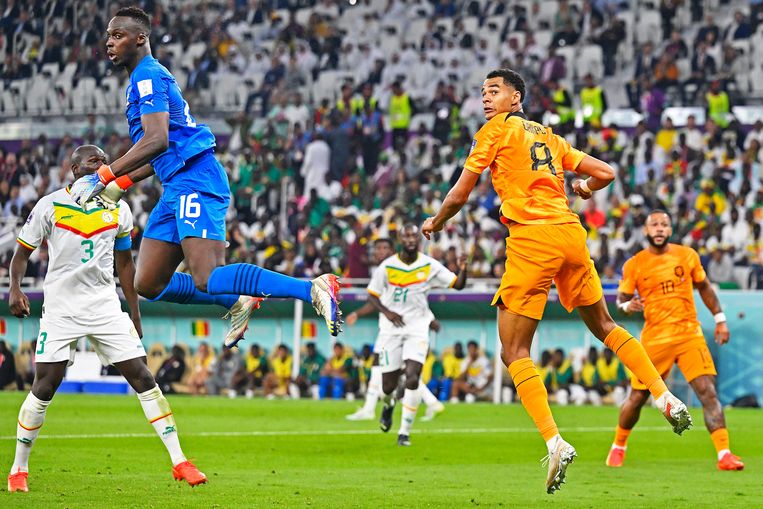 The Netherlands, the team that strives for the world title, dressed in a flashy orange suit, sometimes played football incoherently, although also with the prospect of much more and with passion, like an orange wave that washed over the field, with the goal of the PSV star as a somewhat happy reward. And the decisive 2-0 by substitute Davy Klaassen in stoppage time, after a moderately stopped shot by Memphis Depay.

“The first game is the most important,” said national coach Louis van Gaal in advance, with Ecuador first and then weak Qatar as the next opponents, so that a place in the eighth finals should be feasible. Better teamwork is only needed, less sloppiness, less loss of possession, which always led to an effort to neutralize the Senegalese breakaways.

In any case, the Lions of Orange were regularly almost overrun by Senegal, the Lions of the Teranga (which means hospitality in their language, Wolof). Especially after the break, when the 0-0 seemed inevitable, the Orange struck mercilessly. Daley Blind’s pass, attacking and defending on the left in Louis van Gaal’s 1-3-4-3, was brilliant. Memphis Depay bounced instead of turning away. It turned out to be a good decision. De Jong gave such a ball that only the greatest can deliver. He dropped the ball from the sky. On the defense, in no man’s land for the grabbing goalkeeper Edouard Mendy, because Gakpo headed in with guts.

One of the potentially best players

Senegal – Netherlands was the match in which Frenkie de Jong showed two sides of his abilities, with which the verdict on the Orange was passed. He rose to the platform of the world’s top, as one of the potential best players in the tournament, with dribbles and insight, with risk, with football that makes football worth watching. But he also sometimes fell off the platform, because he should have scored, gave an inconsiderate ball to Virgil van Dijk through the penalty area before the break, and suffered a lot of loss of possession. But yes, at the end there was that ray of light from the magic shoe.

He thus served as a model for the Orange, which sometimes attacked nicely, but too little to really worry Senegal. The attackers Steven Bergwijn and Vincent Janssen, who was replaced by Memphis Depay after an hour, hardly got a chance. Cody Gakpo often roamed from the right, where he unleashed some of his famous crosses. When he scored, he appeared in the center. Splendid.

As expected, Senegal turned out to be an excellent opponent, full of discipline, technique and determination. The champion of Africa wants to improve on the best performance of an African country at the World Cup, the quarter-finals, without the best player on the continent, Sadio Mane (injured).

Exciting was the debut for Andries Noppert, the 28-year-old goalkeeper of Heerenveen, who was promoted within a year from reserve at Go Ahead to goalkeeper of the Orange squad, due to his height and form. But excitement at a World Cup, in a full stadium, with a national anthem different from that of Friesland before the match, is different from excitement in the Abe Lenstra Stadium. They sometimes took no chances with him, the defenders led by Virgil van Dijk, by simply clearing the ball. Never played with each other, only trained. It was Van Gaal’s gamble, prompted by goalkeeper coach Frans Hoek. Noppert had relatively little difficult work to do, although he performed excellently in the second half after shots from Boulayé Dia, in the short corner, and Idrissa Gueye, almost straight at him.

The game swung up and down at a reasonable pace, with many interruptions, and despite the much faster, sometimes maddening drumming in stadium Al Thumama in Doha, which drowned any attempt at other forms of encouragement in hopelessness. Senegal is happy to fold back as a team, with the help of national coach Aliou Cissé.

The dribblers Ismaila Sarr and Krepin Diatta were menacing, skillful and fast. Matthijs de Ligt, instead of Jurriën Timber, was reckless, as if surrendering to Senegal’s national sport, wrestling. The best chance for half time was also for the Orange, after a brilliant breakout, if only because of the pass with which Daley Blind cleared the ball. After that it went fast: from Steven Bergwijn to Steven Berghuis, inside on De Jong, who did not shoot with his left but cut to his better leg. It lasted too long. Fortunately, De Jong enchanted in the second half, shortly before time.