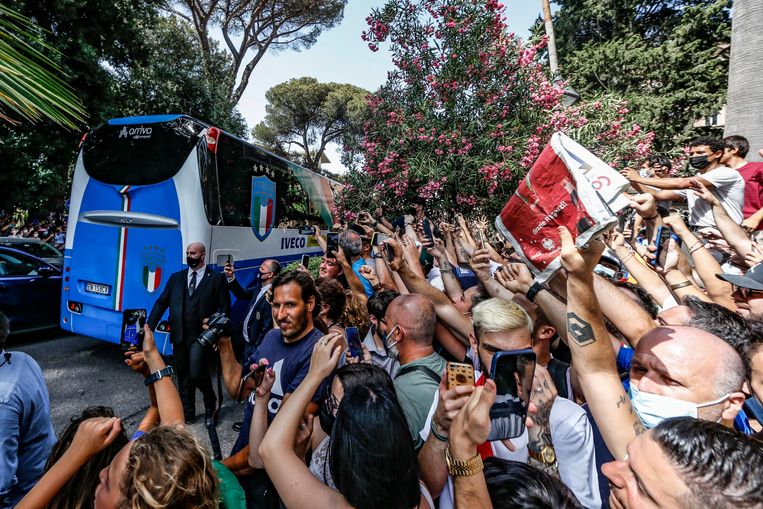 The shocking racism after England’s defeat followed the conservative football of the home country and the shaky organization of the final. It was better for that reason alone that frivolous Italy took the European title to Rome.

The traditional kneeling before the game of the England national team, as a means of combating racism, has certainly not proved superfluous. In particular, 19-year-old Bukayo Saka received so much dung on social media after he missed the last English penalty in the European Championship final against Italy, that the FA released a statement more than an hour after the lost final. The union is shocked. The message: track down perpetrators, ask the government to take action and encourage platform management to be a better gatekeeper.

Jadon Sancho and Marcus Rashford also suffered. They came on shortly before the end of extra time to take a penalty kick without having touched a ball. They missed. The socially committed Rashford urged the government to spend millions on lunches for children in deprived areas. Three young men, socially committed to every fiber, denounced for a miss in a game.

It is the disappointed minority, it sounds standard, but it also says something about the social problems in England, although there was also heartwarming support for the trio. And racism in football is certainly not typically English. In the Netherlands, too, internationals have been treated racially several times if the performance in the national team did not match expectations. It’s a well-known phenomenon: when things go well, the dark player is embraced. But woe betide if it goes wrong.

England lived in a daze for a few weeks, but was blamed on Sunday, also by the public drunkenness of thousands of supporters and the storming of Wembley by supporters without tickets. From a technical point of view, there was criticism of the boring, little attacking-minded football, although almost everything was allowed in the euphoric English media, in the attempt to bring football home. The team was presented as exemplary for the multicultural society, for a thorough approach using data. It was a group of friends.

Of course, after the defeat, the questions came to national coach Southgate in particular. Why switch Henderson after his fill-in? Can’t he take a penalty? Why bring in boys who had barely touched the ball, which is quite different from having a goalkeeper who is a specialist come in especially for the penalty kicks? Where were Grealish, who can go to Manchester City for a hundred million, and Sterling? Southgate had also relied on data here, but the practice was unruly.

And wait a minute: Grealish immediately responded on Twitter. He had told the coach that he wanted to take a penalty, but he decided otherwise. He had to let that go. This creates cracks in the bastion, in the search for explanations that sometimes just aren’t there, because in sports not everything can be explained, even if according to the data everything should be correct.

Thus, Italy became the cheerful, beautiful, satisfying champion. The best, most attractive team in the European Championship. Also a team of friends, if only because of the story of the childhood friends, national coach Mancini and team leader Vialli, back at Wembley, where they lost the final of the European Cup I in 1992 with Sampdoria through Koeman’s free kick.

The story of goalkeeper Donnarumma, so cool after the win, of defenders Chiellini and Bonucci. A thousand stories, of the resurrection also of Italian football, which was missing from the 2018 World Cup. Italy, not even overly talented, but united, offensive and full of struggle, even when the best players left the field in the war of wear and tear.

Italy, with its stale stamp of love for defence, held up a mirror to Europe’s football capabilities. Fun was splashing from the game. Perhaps only Spain, certainly from the second phase, was better at pure football, without being able to express that dominance in numbers in the semi-finals.

Overall, football could use a few dashes of Italian adventure. A goalkeeper (Donnarumma) as the best player of the tournament, the wingbacks as a revelation, that does not stimulate the imagination. Of course, there were fantastic, exciting matches, with the eighth finals France – Switzerland and Croatia – Spain being the highlights.

All in all it was worth it. The Danes were the moral winners, after their impressive recovery from Eriksen’s retirement. The English were a symbol of conservative, reasoned play. Standouts were mainly midfielders, from Pedri to Jorginho, Rice, Pogba and Xhaka.

Many players looked tired from the long season, living proof of the excess of football. Simulation is a problem in the fields that should not be underestimated. Appointment makes football uglier than it is.