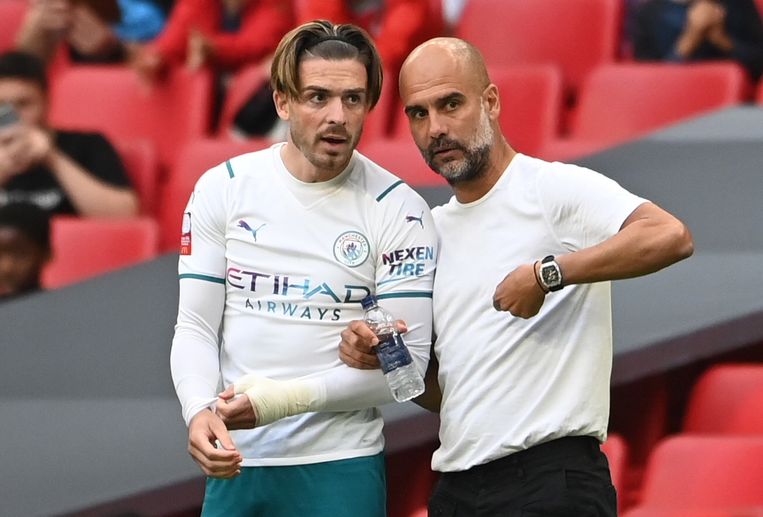 Although the corona crisis of 2020 has caused many major football clubs to take half a step towards a more humane spending pattern, the oil money in top football is celebrating its heyday.

Where Barcelona simply no longer after persistent financial bumbling and rumbling Lionel Messi due to the Spanish league rules allowed kept, the Qatari lenders at Paris Saint-Germain pulled out the wallet with a grin. PSG is a status symbol, and nothing increases status faster than attracting the world’s best player ever. And so signing Messi was so arranged, regardless of the annual salary of 40 million euros.

But PSG’s star ensemble isn’t even the pinnacle of financial excesses that an oil-funded football club is capable of. In that respect, the Parisians are losing out to the Emirates-run Manchester City.

With the signing of technician Jack Grealish, who with a transfer fee of 117 million euros in one fell swoop is the most expensive English footballer ever, City went through the border of 1 billion euros in terms of transfer expenses in the period in which Pep Guardiola (since 2016) is at the helm as manager at the top club. Qatar has Messi, the Emirates’ world’s first multi-billion dollar team.

Success can be bought in top football. Because players are for sale. But buying success takes a lot of time in addition to tons of money, it turns out. Even after a billion in transfer fees, Guardiola and Manchester City are still waiting for their first Champions League final win, and are already eyeing another record purchase.

What City have spent under Guardiola in transfer fees since 2016 is interesting to analyze. After all, the greatest players on earth – Messi, Ronaldo, even Mbappe and Neymar – never wore the sky-blue jersey of The Citizens. Also, the two best players in the current City squad, Kevin De Bruyne and Raheem Sterling, were already under contract in Manchester when Guardiola arrived as manager, as well as captain Fernandinho and goalscorer Sergio Aguero (now Barcelona).

Manchester City seems to adopt the view that football is a weakest linksport is that the team is only as good or bad as the quality of the least player on the field. And so the qualitative lower limit of the selection had to be raised. Every season. And each time, only the best of the best in terms of young talent was sufficient. This results in a Caterpillar Never Enough approach.

One year the defense has to be strengthened, then Guardiola is not broad enough in the attackers, and then the average age has to be reduced again with a rejuvenation cure. And of course every position must be ‘double occupied’, preferably with two young top players.

And so City goes from luxury purchase to luxury purchase. And every time the luxury has to be more beneficent and more efficient. For playmaker Grealish, essentially the successor to the veteran David Silva who left for Spain in 2020, Manchester City breaks the 100 million euro mark for an individual for the first time. The next transfer target, England and Tottenham striker Harry Kane, is yet to cost one and a half times as much.

Each and every one of City’s signings are excellent players. Some even global players. But continuing to upgrade seems to yield increasingly marginal gains. The quality gains that City make on the pitch by moving from Ilkay Gundogan to Grealish in midfield, or from Gabriel Jesus to Kane in the striker, cannot be worth 100 million.

At least, according to the normal logic of a mortal football club. Manchester City have won ten domestic trophies (including three league titles) since 2016, but it wasn’t enough. Won 220 of his 296 games in that period, not enough. Scored 734 goals under Guardiola, not enough. Three statistics that make City an absolute outside category in their own Premier League, currently already the outside category competition in top football.

But City has still not reached the final goal. Because this financial display of power must yield the main prize, the final win in the Champions League. City stranded in the past five seasons in the eighth finals, the quarterfinals and the final three times in a row. Three times it went out against a compatriot who was below City in the English ranking that season, twice against an underdog (Monaco in 2017, Lyon in 2020) from France’s puny Ligue 1.

They turn out to be costly slips. Not just for Manchester City, but also for the competition, who can’t live forever on a ceaseless flow of oil money. Because until the top prize is in, there will be no end to City’s urge to spend. And going along with the Manchester club’s spending mania is at most reserved for that other oil club, PSG.